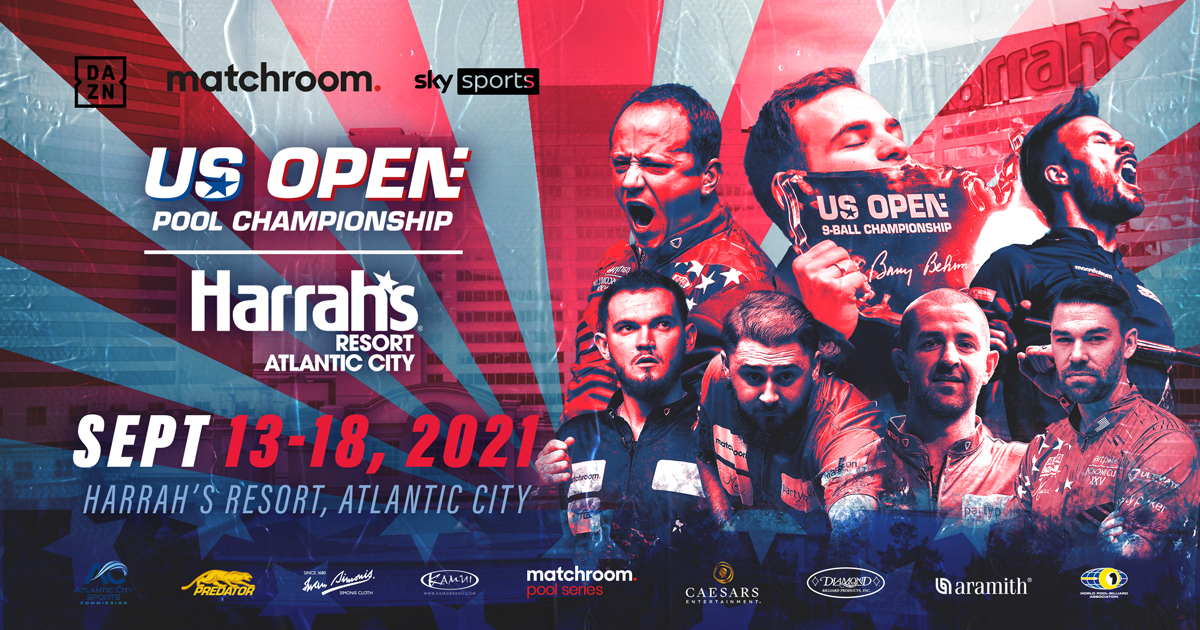 Player entries for the 2021 US Open Pool Championship will open at 9am ET on Friday, July 2, with the entry fee lowered to $750 per player for the event, which will take place at Harrah’s Resort Atlantic City from September 13-18.

The prize fund will remain at the 2019 total of $300,000, meaning Matchroom is committing an additional $64,000 to the added prize money, which now stands at over $100,000. Sticking with tradition, previous US Open Champions will be offered a free entry to the event.

The tournament format has been revised for 2021. The tournament will now benefit from global live TV coverage on every day of the event, with broadcast hours increasing from 24 in 2019 to 54 for 2021.

All subsequent matches will be race to 11, except the final which will continue as a race to 13. Matches will be played across 33 tables for the first three days and eight tables for the concluding rounds of the double elimination stage. Tables will half to four for the last 16 and two for the quarter-finals, with both of those rounds played on Friday, September 17. The semi-finals and final will all take place on the main TV Arena table on September 18.

“Despite our recent climate, we are optimistic of a full-size field of 256 players, however as part of our new vision at Matchroom Pool and upcoming changes, we are pleased to decrease the entry fee for players to $750 whilst keeping added prize money as it is. It has been a tough schedule for professional pool players and many athletes; but we are hopeful of a grand return for the US Open and we know players are eager to play on the Matchroom World stage.

“An increase in both production and televised live broadcast hours this year will elevate the US Open, making sure every player, fan and viewer can enjoy the biggest Open event in professional Pool. We anticipate a sell-out field for the event; with players being the centre of attention in Atlantic City and the Harrah’s Resort.”

Players will be available to enter via matchroompool.com from 9am ET on Friday, July 2.

News on spectator tickets will be available later this month. Player entry is open to anybody wishing to take part. Players who entered the cancelled 2020 US Open will be guaranteed a spot in 2021 if they enter in the first 24hours, and all players in the top 50 on the Matchroom Pool World Ranking are guaranteed a place if they enter by midnight (Eastern Time) on Friday, July 15.