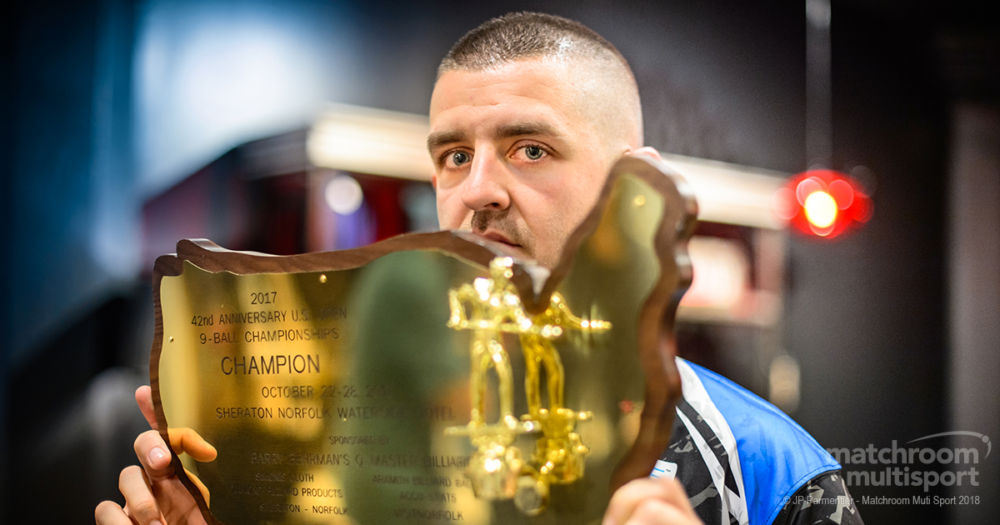 Jayson Shaw will defend his US Open 9-Ball Championship title at Mandalay Bay Resort, Las Vegas when the tournament returns for its 43rd staging – the first under Matchroom Multi Sport – from April 21st to April 26th 2019.

The Scotsman, now residing in New Haven, Connecticut has been arguably the world’s best 9-ball player in recent years with numerous titles to his name. He won the US Open 9-Ball for the first time last October, staying on the winners’ side of the draw throughout before defeating Albanian star Eklent Kaci 11-4 in the final to take home the title.

Player entries for the next US Open 9-Ball Championship open on Monday (June 4th) at 1pm Eastern/10am PT at www.matchroompool.com but as a previous champion Shaw has already confirmed his place in the tournament.
The 29-year-old has plenty of experience at Matchroom Multi Sport events including being a two-time Mosconi Cup winner and previous World Pool Masters finalist, and the Scot believes the addition of the US Open to the Matchroom portfolio can only be good for pool.

“It felt great to win the US Open last year,” said Shaw. “I have come close a couple of times in the past with a third and fifth place finish and lost out hill-hill a couple of times. It hurt me a lot, but I practiced hard and came back strong. I played really well and was super happy to win it after coming close.

“I’ve got lots of good memories of the US Open, it’s one of my best tournaments and I’ve been going since I was 16 years old. The crowds are good and I probably played my best pool that week, I smashed everyone I played – it was one of my best weeks of pool I’ve ever had.

“Matchroom have the best tournaments including the World Pool Masters, World Cup of Pool, and the Mosconi Cup and they do great things. I know that with them taking over the US Open it will be for the greater good of the sport and push it in the right direction to hopefully grow into something really big.

“I hope people come out in their numbers in Las Vegas to watch, and knowing that it will be live on TV is great. Fans like to see a good event run by good people and that’s what Matchroom do.”

Players can register their entry from 1pm Eastern/10am PT on Monday 4th June at www.matchroompool.com/usopen9ball/. Players can pay the $1,000 entry fee in full or opt to pay a $250 deposit to secure their spot with the remaining $750 to be paid prior to February 1st 2019.

Five-time Champ Van Boening Chasing US Open No.6 In Vegas