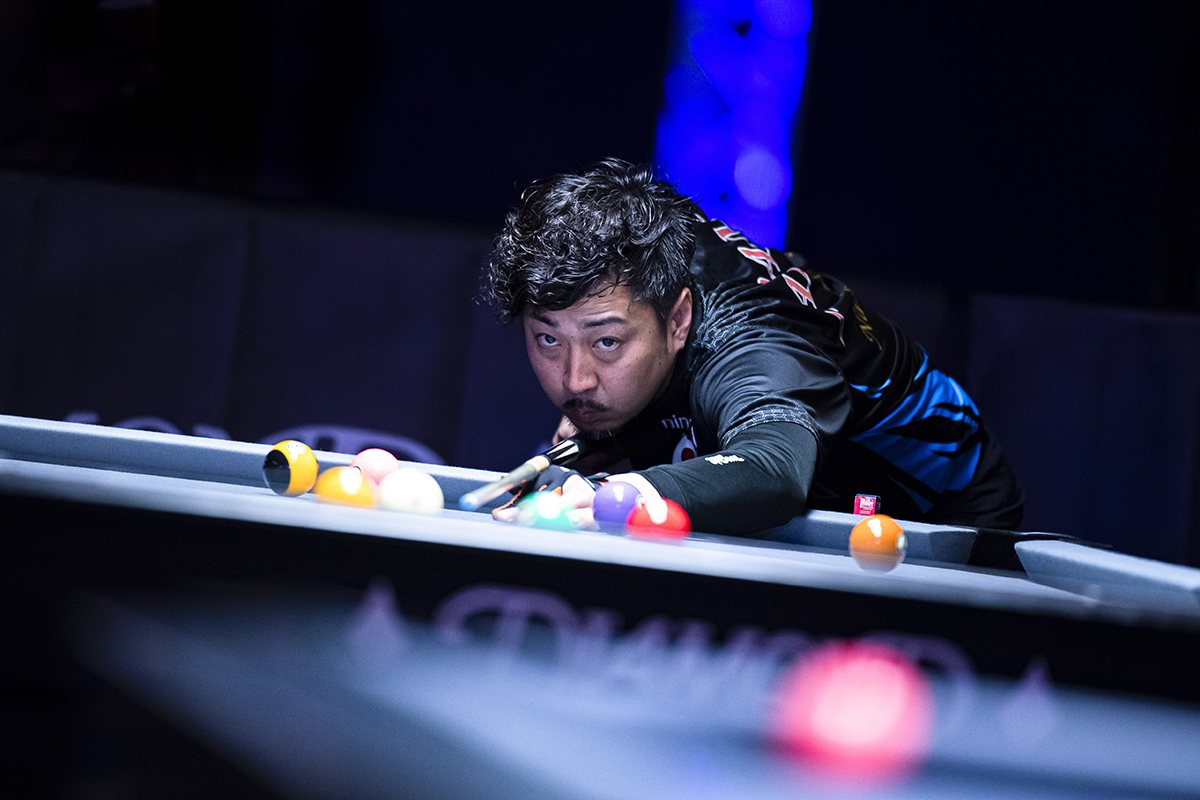 Albin Ouschan, Ko Ping Chung, Alexander Kazakis, and home favourite Jayson Shaw all went out of the inaugural UK Open Pool Championship at the Copper Box Arena, London. Only 16 remain as the $200,000 tournament heads into single elimination live on Sky Sports Action in the UK and Ireland, DAZN in the USA, Canada, Italy, Spain, Viaplay in Scandinavia, Poland, and the Baltics as well as Matchroom.Live and networks worldwide.

It was a grueling day of action in one of London’s most iconic venues as the tournament went through three stages of Losers Round action and a further two rounds of Winners to get the final 16 who will now compete over three tables in Races to 11 to make Saturday evening’s quarter-finals.

One player who won’t be there is Ouschan who has been battling to keep his impeccable record at Matchroom events going. It started in the best possible way with a win over veteran Ralf Souquet but he came up against a resurged Robbie Capito of Hong Kong, China who played one of the matches of his career to knock out the two-time World Champion 9-0. Shaw headed into the day knowing he needed to win three ties to keep hopes of making the final two days on home soil but it wasn’t to be as young Jonas Souto Comino of Spain came good in a hill-hill finish early on live on the Matchroom Pool YouTube channel. Souto Comino’s hopes of his best performance to date in a Matchroom event ended at the hands of Mika Immonen 9-3 swiftly after.

Francisco Sanchez Ruiz was dumped onto the Losers’ Side of the tournament on the opening day and has since then battled away to make the Last 16. The Derby City Classic 9-Ball winner sidestepped past USA Mosconi Cup hopeful Nicholas De Leon 9-3 before wins over Ping Chung and Wojciech Szewczyk to make it two Spaniards in the final stage. The ever-present David Alcaide has stayed on the winners’ side with relative ease all week but had his sternest tests of the week beating both Immonen and World Pool Masters semi-finalist Mieszko Fortunski 9-7 to be right in the picture.

World Champion Shane Van Boening continues to steamroller his way through the tournament beating Daniel Maciol 9-3 to be in the hat whilst Mario He’s remarkable week continued to defeat Thorsten Hohmann 9-3 after beating Ko Ping Chung 9-1 earlier on. World Pool Masters winner Joshua Filler breezed past one of the last remaining Brits Luke Rollison 9-2 with a golden break along the way to join He and Van Boening in the draw.

Another World Pool Masters winner in Karol Skowerski rolled back the years to beat Skyler Woodward 9-1 for his Last 16 spot after defeating compatriot Wiktor Zielinski in a hill-hill finish. Woodward did join Van Boening in the single-elimination stage though after fighting off a resilient Capito in Losers’ Qualification.

There will be one Brit flying the flag this weekend though as Imran Majid battled through a hardy day on the Losers Half beating Marco Teutscher in a hill-hill finish before overcoming Jose Alberto Delgado and Thorsten Hohmann 9-5 and 9-3 respectively. Majid faces Filler for a spot in the quarter-finals.

The Last 16 draw was completed by Karl Boyes and Matchroom Multi Sport Managing Director Emily Frazer. The eight winners from the winners half kept their seedings and were randomly drawn against the eight players from Losers’ Qualification.

Naoyuki Oi vs Mario He

Tickets start from £15 for the day using the code UKOPEN at checkout. Secure yours here