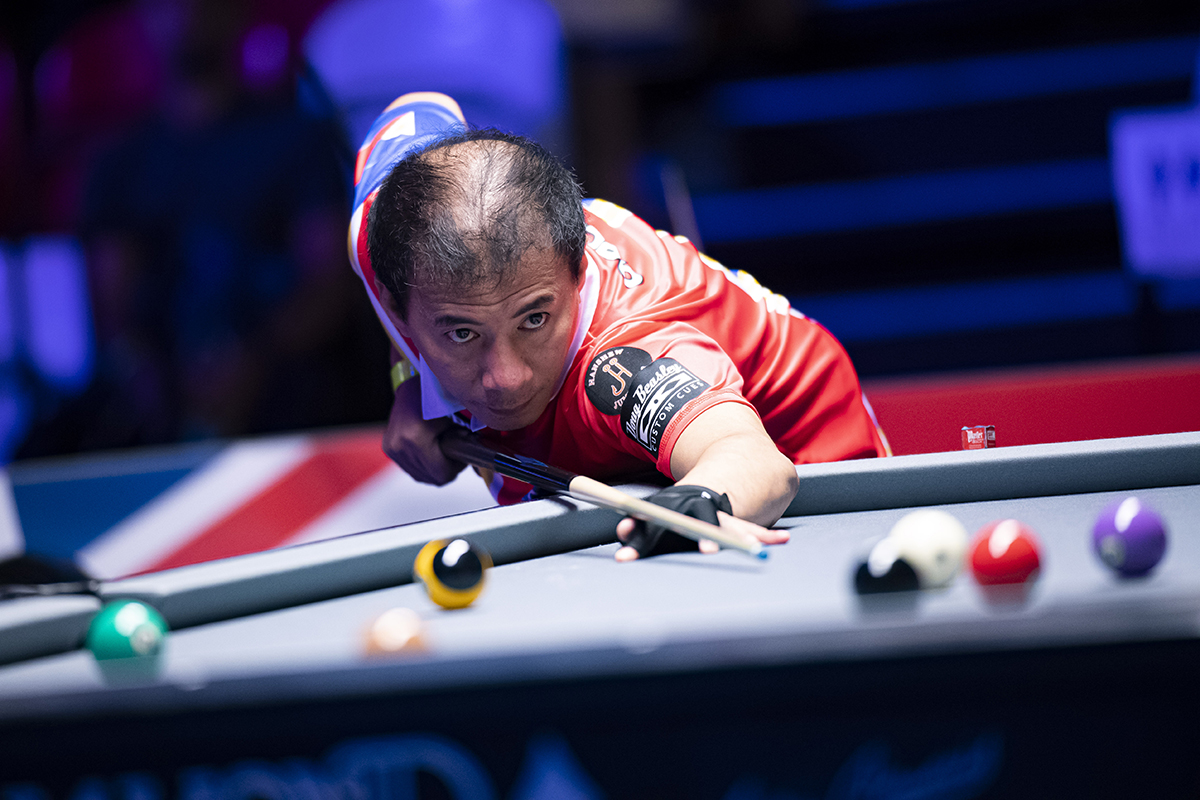 Day 2 of the UK Open Pool Championship at the Copper Box Arena, London live on the Matchroom Pool Facebook and YouTube pages as well as Matchroom.Live brought plenty of success for the top seeds as only Ko Pin Yi, Naoyuki Oi, and Eklent Kaçi came unstuck in Winners’ Round 1.

The action began live on the Matchroom Pool Facebook with the two young guns of Lo Ho Sum and Mickey Krause head to head with Ho Sum looking to build on his runner-up finish at the World Pool Masters just a few weeks ago. Krause is far from a pushover though and the Dane showed his credibility and rise through the ranks to dispatch the Hong Kong, China player to Losers Round 2 in a 9-5 win.

Dennis Orcollo went up to Solihull, Birmingham between the World Pool Masters and the UK Open to keep in stroke playing in a local tournament which he won on Sunday evening and that decision seems to have paid off so far as he came good in a 9-4 win against Chris Seville of Great Britain.

One of the upsets of the day came on one of the back tables as 2015 World Champion Ko Pin Yi was on the end of a 9-4 loss to Luke Garland. Garland was only a few frames away from a World Snooker Tour card a few years back before defeat to UK Championship winner Zhao Xintong at the final hurdle and it showed his pedigree to run seven racks on the way to an 8-0 lead over Pin Yi. Pin Yi did come back but it proved too much of a hill to climb putting him into the next stage in the Losers bracket.

Oi is still in search of his first Matchroom title and his work will be cut out if he is to get rid of that hoodoo this week. The Japanese star fell at the hands of Pole Mariusz Skoneczny in the opening match of the day live on the Matchroom Pool Youtube. Kaçi also came missed out to Skoneczny’s compatriot Daniel Maciol 9-6. Maciol will face Pijus Labutis in the next round on the winners side whilst Kaçi faces Rich Jones on the other side of the bracket to keep his hopes alive.

The USA’s Chris Reinhold survived an inspired fightback from Pia Filler to set up a clash with Pia’s husband Joshua in the next phase. Reinhold had amassed an initial advantage but Filler came back into the contest most notably with a brutal hook early on in the 14th rack. Filler ran it close to get one away from Reinhold at 8-7 but it was the two-time Mosconi Cup player who pulled through to meet Joshua next.

It was the end of the road for Martin Gould on day two as the former World Snooker ranking event winner faced two defeats. Firstly to Great Britain’s rising star Elliott Sanderson despite hitting the front first and looking in control before being dumped out of the competition in the evening to the vastly experienced Daniele Corrieri who will represent Italy at the World Cup of Pool next month from June 14-19 at the Brentwood Centre in Essex, England.

The journey for Gary Wilson continued though as the former Crucible semi-finalist bounced back from defeat to Chris Alexander to beat Gianluca Cappella and set up a tie with  Romania’s Babken Melkonyan tomorrow.

Top seeds Shane Van Boening, Albin Ouschan, David Alcaide, Max Lechner, and Jayson Shaw amongst others all sailed through their respective contests to keep their run on the Winners’ Side continue. Alcaide yet to drop a rack this week whilst Van Boening has only dropped two so far.

There’s plenty of action for fans to get their teeth into tomorrow as Losers Round 3, 4 and 5 all take place as well as Winners Round 2, and 3. Over 100 players will be out of the tournament by the close of play tomorrow.

Tickets start from £15 for the day using the code UKOPEN at checkout. Secure yours here

EFREN REYES TO REPRESENT PHILIPPINES AT 2022 WORLD CUP OF POOL IN ESSEX, ENGLAND