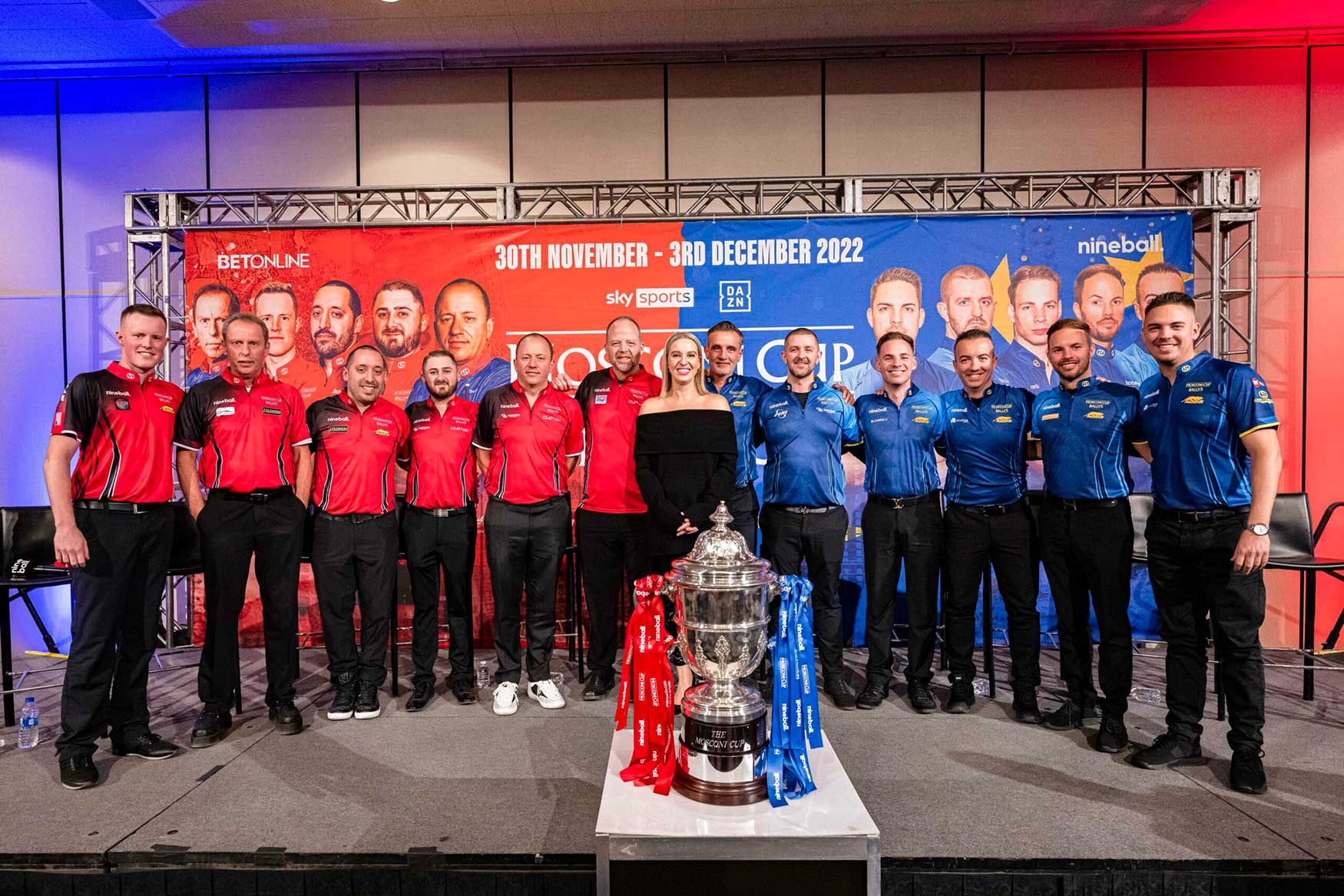 TEAM USA AND EUROPE CLASH AHEAD OF 2022 MOSCONI CUP

Team USA and Team Europe clashed at the 2022 Mosconi Cup press conference with less than 24 hours to go until the two sides lock horns at Bally’s Las Vegas live on Sky Sports in the UK, DAZN in the USA, Canada, Italy, and Spain, Viaplay in Scandinavia, the Baltics and Poland and networks worldwide.

USA captain Jeremy Jones came out fighting when reflecting on what the home crowd can expect from his side ahead of the opening team match at 11 am local time tomorrow: “I feel great. My nerves are going but I wouldn’t have it any other way. The guys have had a great few days and they’re improving every single day. The foundations are the most solid I’ve been on. When it comes to doubles play these guys mix well. They respect each other. Everybody is held accountable and they understand it. We have one goal in mind.”

Jones will be assisted by Skyler Woodward as playing vice-captain this week and he hopes to lean on the two-time MVP for support: “Skyler is a big spirit in our team and he’s been a big part of the last few years. There are certain minds that sort of get it. You’d be ignorant to not ask what Skyler Woodward thinks. The home crowd means a lot they will embrace it. It won’t always be easy. It’s good we have the better half of 2,500 on our side. I don’t see it too much more difficult here in Las Vegas to London. We’ve been on one mission all year and that’s to come here and win the cup.”

“Last year we got into a great position and we let a few things get away. This year, we plan to get in that position again and have a better outcome. We’ve practiced the lag, we understand it better as a unit. The lag doesn’t look as meaningful this year but certainly, it’s important still and it’s something we’ve addressed,” Jones added.

Woodward said: “It truly is an honour to be playing vice-captain. It makes me want to prove myself more and show that the USA can still compete. I try to bring the team together we’re six guys but I’m just trying to make us one. I’m not going to let anybody get down, I will push everyone and try to get everyone to win their matches, that’s just the kind of guy I am.”

Alex Lely will lead Team Europe for a third straight year and acknowledged his team is full of big characters that he needs to control: “Any coach on either side will give 100% depending on the team and the set of players you have to focus on different things. They’re a handful and it’s enjoyable but they’re five champions and you have to find a way to make them bond and mix well. There are a couple of veterans who have been around. I can get back to the same things for certain things in my third year. There’s a backbone in the team.

“The team has looked sharp from day one. The downside is they’ve been traveling and playing a lot but the upside is they’re sharp. The pockets are tight. I think it helps them. If you’re playing on tight pockets you have to focus. I think because of that they’re looking sharp and focused.”

Francisco Sanchez Ruiz is set to make his Mosconi Cup debut in a glittering year that saw the Spaniard snap off the US Open: “It’s like a dream to be here at the Mosconi Cup. I am going to give everything for sure. It’s been an incredible year but to be honest I’ve only been thinking about tomorrow. It’s amazing to play alongside David Alcaide, to play together is going to be the best experience of our lives.”

There was a sharp focus on the tension between American legend Earl Strickland and Team Europe playing vice-captain Jayson Shaw with the pair trading blows on a variety of points. Strickland paid compliments to the tighter 4-inch pockets: “I will say one thing about this event that makes it a level playing field is the equipment. It’s the most difficult I’ve ever seen. If these guys over there (Team Europe) think they will make very shot, they’re fools.”

Shaw interjected to his side will make every ball before Strickland fired back to say he wouldn’t be engaging in any of the Brit’s ‘bullsh*t: “I am sure he won four or five world championships on five-inch pockets. He can say whatever he wants. I know what the pockets are like in the backroom. I know how tight they are but we shoot straighter than all of them and that’s fact. Under the gun, we produce better and that’s a fact too. When we step out there and under the gun, we won’t be ducking for no shots.”

See more from the Press Conference on the Matchroom Pool YouTube right now.

Team news from both sides will follow tomorrow ahead of the first day of action.

BET ON THE 2022 MOSCONI CUP WITH BETONLINE