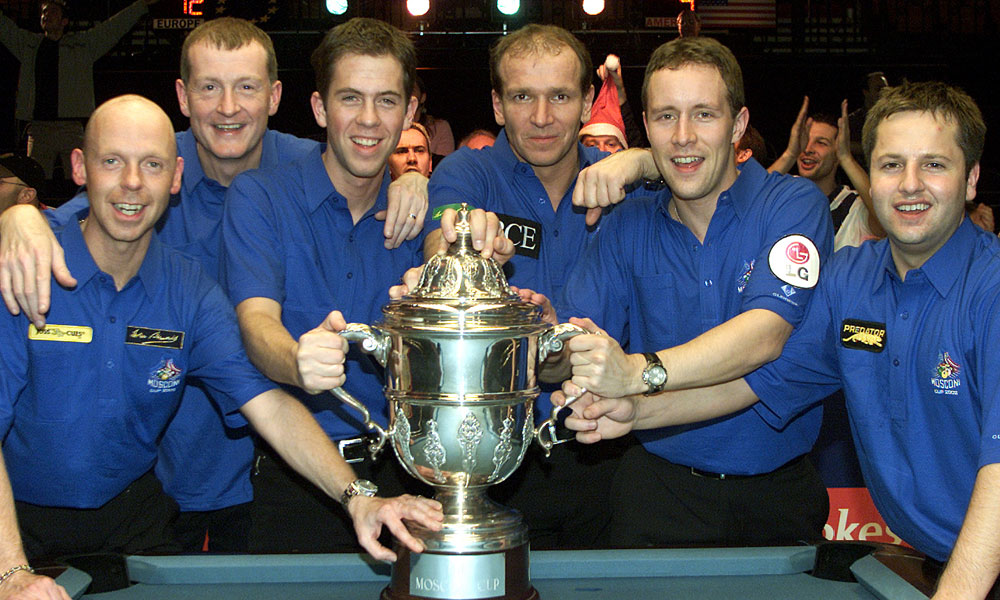 He is best known around the world as one of snooker’s greatest ever players, but Steve Davis also has quite a history with the Mosconi Cup.

Having played in each of the first 11 Mosconi Cups from 1994, ‘The Nugget’ was a stalwart of the early years of pool’s greatest competition and describes his first victory as “one of the highlights of my career – regardless that it wasn’t even my career.”

Unlike in recent times, Team USA dominated the first decade of the Mosconi Cup. Having lost the inaugural event, Europe hit back in 1995 with a 16-15 victory in Romford. But they had to wait seven years to lift the famous trophy again. In 2002 they were 12-9 winners, responding in style to the 12-1 humiliation dished out by an all-star American side in which a 25-year-old Corey Deuel was the MVP.

The 2002 Mosconi Cup victory is one of Davis’ proudest moments, and something he has reflected on in his autobiography Interesting, which was published earlier this year.

He wrote: “For the first two years of the Mosconi Cup a mixture of Alex Higgins, Jimmy White, Allison Fisher and me represented Europe (even though we were by no means the cutting edge of European pool) and came up against the best players from the States (or so we thought!). We shared the spoils.

“However, the following year, the USA sent over the big guns. They looked strong, assured and mean! The granite Johnny Archer and the volatile Earl Strickland particularly impressed me. I was still new to the game but I had started to pick up some of the skills and nuances – although I never really got to grips with the explosive break-off shot or the spectacular ‘Jump’ shot. We got our asses ‘whooped’ – as the Americans succinctly put it – for the next six years.

“The most embarrassing ‘whooping’ was the sixth in 2001 when we were drubbed 12-1 at York Hall in Bethnal Green. We had two German lads in our team – Oliver Ortmann and Ralf Souquet – and they were steaming.

“Next time around, the European team met up a couple of days before the event and bonded. As usual, it was a race to 12 rubbers – a mixture of singles and doubles – but our team this time around (Oliver, Ralf, Marcus Chamat, Mika Immonen, Nick van den Berg and me) was a totally different proposition. By this time, I had played in numerous pool tournaments, including the new nine-ball World Championship.

“We had the crowd on our side and we were leading 11-9 when I went into battle against the mercurial and temperamental legend that was the eight-time nine-ball World champion, Earl Strickland.

“In normal circumstances, there would only have been one winner, but in a best-of-nine this turned out to be one of the most exciting matches I have ever experienced with a cue in my hand. It went down to 4-4 and sudden death.

“Earl took control of the rack but an uncharacteristic error while playing from the five ball for position on the six meant he had a missable shot. Ironically, it was the same type of shot as my black against Dennis Taylor. Amazingly, he missed it. Suddenly, I was three balls away from beating one of the greats of the game and securing the first credible win for the Europeans against the mighty Americans. I knocked in the six and the eight to leave myself perfectly on the nine ball.

“This was it. My team-mates were already celebrating and the crowd couldn’t believe it. But I had one more thing to do – pot a simple nine ball into a huge American pool table pocket from two feet. It was unmissable – but nothing is ever certain. With my back arm shaking like a leaf, I remembered to keep my head perfectly still and watched it go in. The crowd erupted as I shook hands with Earl – and then the rest of the European team descended upon me. We were in a huddle, jumping for joy. Six years of humiliation had evaporated in one shot.