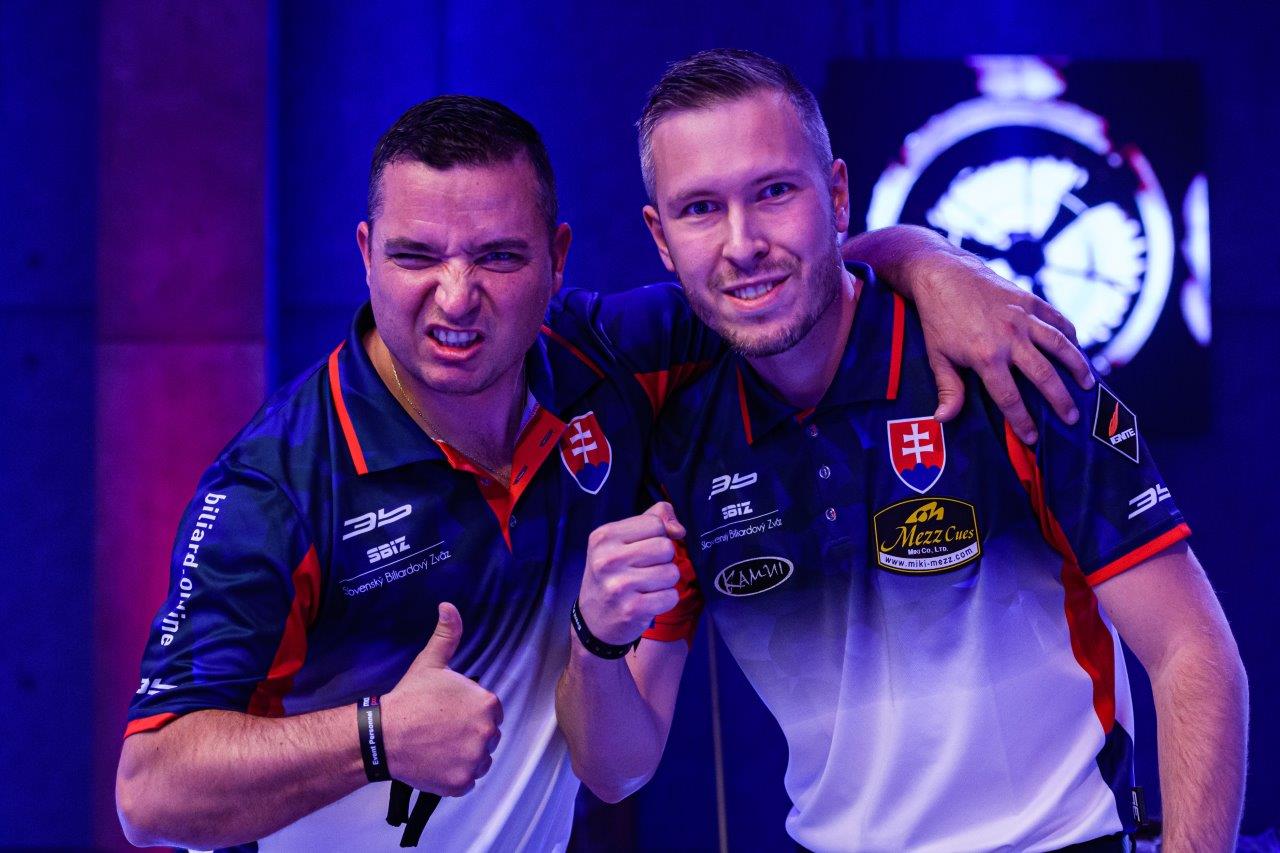 World Cup of Pool debutants Slovakia stunned defending champions Austria, knocking out the No.1 seeds with a brilliant 7-1 victory on the opening afternoon at Stadium MK, Milton Keynes.

Albin Ouschan and Mario He have reached the last three World Cup finals, lifting the trophy in 2017 and 2019. However, Jakub Koniar and Jaroslav Polach barely gave their opponents a chance as Slovakia proved exactly why they had been invited for the first time. A little luck along the way helped but Koniar and Polach looked calm at the table as they ran four of the seven racks won to advance to the second round.

“It is amazing,” said Koniar. “We had a little bit of luck in the beginning but with the 1-ball on the spot and winner breaks, you can even beat the best team in the world.

“We knew we could win. I have beaten Albin a few times, Jaro has won against both players in the Austrian Bundesliga, so we knew if we played our best game we could win.

“We practiced the break all last weekend together,” added Polach. “We played a hard break, the cue ball control was good, and we had a little bit of luck, but from 2-1 to 6-1 they weren’t at the table. In this game you can beat anybody in the world.”

Slovakia will face Czech Republic in the second round after a 7-4 success over Hungary for the Czechs.

“It will be a federal derby,” said Jaroslav. “We play every year something like the Mosconi Cup between Czech Republic and Slovakia. It hasn’t played last year because of Covid so now we will play one scotch doubles to see who is best!”

Yoshioka earned his first appearance in the World Cup on the back of a fine run of form prior to the Covid-19 lockdown. A win in the Kansai Open in his homeland and a bronze medal at the World 10-Ball Championship helped him rise to Japanese No.1 and World No. 36.

In their opening match, he actually looked the more comfortable of the pair, his experienced partner struggling at times with cue-ball control. Croatia, though, were really struggling. Japan only ran out one rack, so even with the winner breaks format the Europeans had chances, but they were only able to take one of them and Japan eventually won 7-1, a result which meant TV viewers were treated to another colourful Oi interview.

“It was a very fast match today, the table was playing very quick with the new ball and the new cloth. It was difficult but my teammate was confident,” he said, before treating those watching to a victory dance. “In the next round it will be Russia, they have the World Champion, or Switzerland who are very good, they have strong players. But Japan will play to win.”

After Japan’s cruising first-round victory, the clash between Czech Republic (Petr Urban and Michal Gavenciak) and Hungary (Oliver Szolnoki and Vilmos Foldes) was a more attritional affair. The Czech team’s preparations were hit when Roman Hybler had to withdraw less than a week before the event, but Urban proved a worth deputy.

The first six racks were shared before the Czech team pulled ahead and moved to the hill at 6-3 up. Hungary fought back briefly but their campaign was ended when Urban and Gavenciak won the 11th for a 7-4 victory.

The World Cup of Pool continues from 5:30pm (UK time) this evening with three more first round matches; Russia will face Switzerland, Greece take on Serbia and Estonia are up against Belgium.

DRAW MADE FOR WORLD CUP OF POOL

RUSSIA, GREECE AND ESTONIA SAFELY THROUGH AT WORLD CUP OF POOL