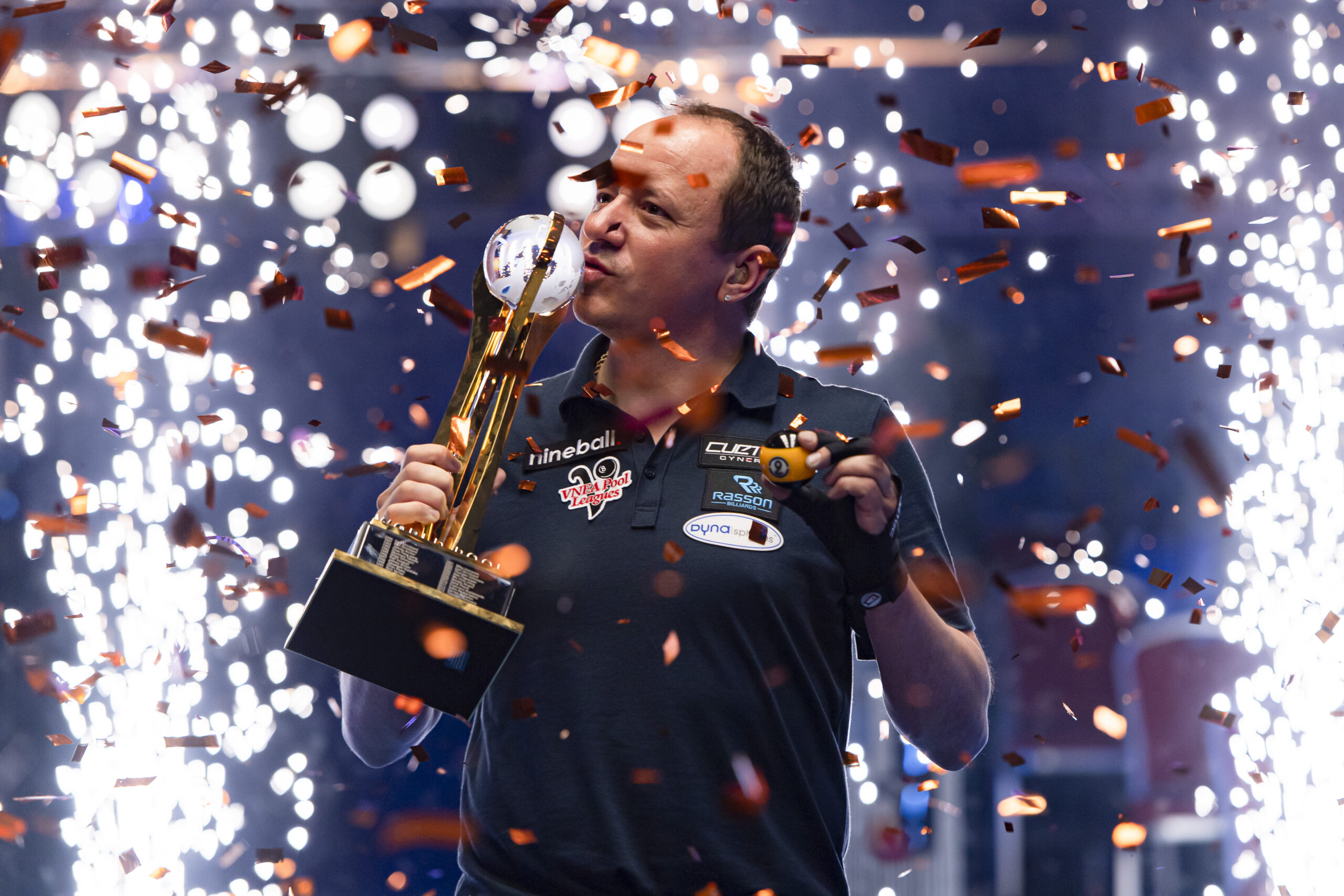 SHANE VAN BOENING IS ON TOP OF THE WORLD

Shane Van Boening is the champion of the world after beating Albin Ouschan in the 2022 World Pool Championship final at the Marshall Arena, Milton Keynes. Coverage live on Sky Sports in the UK/Ireland, DAZN in the USA, Canada, Brazil, Spain, Italy, Germany, Switzerland, and Austria as well as Viaplay and networks worldwide.

Van Boening won the lag before taking the opening rack in a comfortable fashion. The American was pegged back in the second though after missing a routine 2 ball to the bottom pocket. At that, Ouschan found his groove to put daylight between them both at 3-1 after four racks. At 3-1, Van Boening got some table time and made the most of it as he twisted the screw with a pinpoint jump shot on the 3 followed by a raking effort to pot the 4 and make it 3-2.

Ouschan did reassert a two-rack different in the sixth rack but it was short-lived after scratching on the break in the resulting rack. It was a case of blink and you miss it as Van Boening turned the contest on its head to take the eighth rack to level at 4-4 before a simple 1-9 combo put him in front for the first time since 1-0.

A tie between two modern greats was always going to deliver with very little to separate the pair. As quick as Van Boening took the lead at 5-4, it was soon Ouschan back ahead at 6-5 with a break and run. The crowd was kept entertained throughout and the duo put on a clinic in safety play with a standout moment coming in the 12th as Ouschan found himself with no eye on the pocket on the 1, he played a sweet safety to tuck the cueball behind the 4 and 6 ball whilst leaving the 1 ball near the bottom pocket. Despite what looked like an effortless safety, Van Boening kicked out like the demon he is to make the 1 ball and soon level again at 6-6.

Van Boening’s cue action has delighted many for so long and it was a case of it being as clean as ever and no better rack showed that than the way he kept the cue ball on a piece of string. From 6-6, it was the American who quite literally ran home with an expert performance and deliver his first-ever world title leaving Ouschan with very few opportunities at the table as he wrapped up an emotional 13-6 win.

An emotional Van Boening said: “I have been trying for years. Two times I’ve been in the final and two times in the final. I just knew I was going to win the World Pool Championship. I dreamed I would be World Champion. It teaches you to work hard, follow your dreams and never give up.”

“It was just a fantastic week. That match for me against Mika, changed things. I could’ve been going home at 10-3 down. But I fought my way through. I am lost for words. I am so happy for myself, thank you to all the fans in this sport.

I put in so many hours in my career. I dreamed of being world champion. Today is that moment.”

“Matchroom is the best thing to happen to this sport. Without them, this would never even be possible. A big thank you to Matchroom and the whole team. It is a dream come true. It makes me hungry for more, I will go home and go fishing for a bit but then I will be working hard again.”

“To the middle of the match, it was back and forth. I played a safety then didn’t make a shot for the rest of the match. Shane played a great tournament with great comebacks. He deserved it today. I am disappointed, but it is fair to say he played better. He had some rolls but without that, you cannot be world champion” – Ouschan said.

Van Boening’s win sees the American shoot up to the Live 2023 Nineball World No.1 with over £60,000 in prize money. The win putting Van Boening in a commanding position to keep his place in the Team USA Mosconi Cup team this November 30-3 December at Bally’s Las Vegas.

Next up, fans can expect news in the coming days of the four wild cards for the upcoming World Pool Masters at the Europa Point Sports Complex in Gibraltar from May 5-8 with tickets available from only £7.