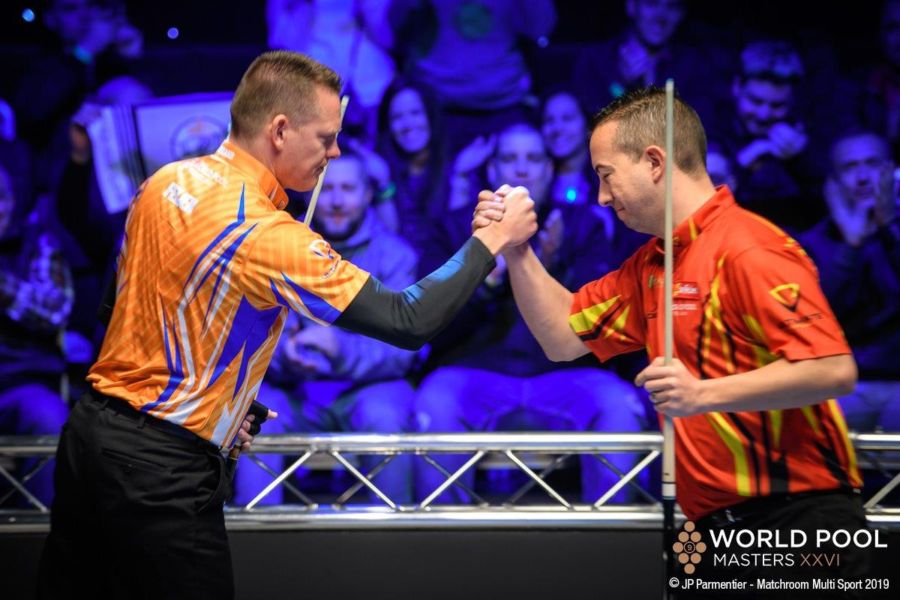 PLAY CONTINUED at the Dafabet World Pool Masters with four of the first round matches the Victoria Stadium in Gibraltar. There was plenty of excitement with two matches going all the way as two-time winner Shane Van Boening came within a whisker of elimination.

David Alcaide enjoyed another 7-3 win as he coasted past defending champion Niels Feijen to keep on track for his second Masters title. The veteran Spaniard, a champion here in 2017, never really looked in trouble as he pulled away from the shaky Dutchman in the latter half of the game.

“This tournament, I remember two years ago I played not perfectly but at 95%. Today, I didn’t have a good break. It is very important when you play close to home to have the support from your home fans. When you play the World Pool Masters every player is a top player in the world so it doesn’t matter who you play.”

The most dramatic match of the session saw two-time winner Shane Van Boening crawl over the line as he narrowly escaped a first-round exit at the hands of China’s Ladies World No.1 Han Yu.

With Han starting the match at as much as 11/1 there were few who gave her much of a chance but she took the opening rack after a long safety battle with the six-ball tied up with the 9.

Van Boening took the next two racks but missed a relatively straight forward two ball to allow Han to level. She then surged ahead and at 6-3 and breaking had every chance of landing the upset. A misjudged safety allowed Van Boening back in and he ran out for 6-4 and he took racks 11 and 12 to make it hill-hill. Han got back to the table in the last but Van Boeing held on to survive a massive scare.

The next match also went down to a decider as Alex Pagulayan made it two wins in two days as he dislodged Ko Pin-yi by 7-6. The plucky Canadian-Filipino had a tough draw – he defeated Wu Jiaqing yesterday and was rewarded with Ko – but was in irrepressible form to dispose of those two world-beaters.

In the final match of the session, yesterday’s giant-killer, Justin Sajich of Australia, failed to make further progress as he was stopped in his tracks by Alex Kazakis of Greece.

Kazakis, who qualified for the Masters by virtue of being World No.1 at the close of 2018, had too much as he closed out the match for a 7-3 win and a quarter-final match against either Konrad Juszczyszyn or Matt Edwards.

Play continues on Saturday evening with the conclusion of the Last 16 matches: