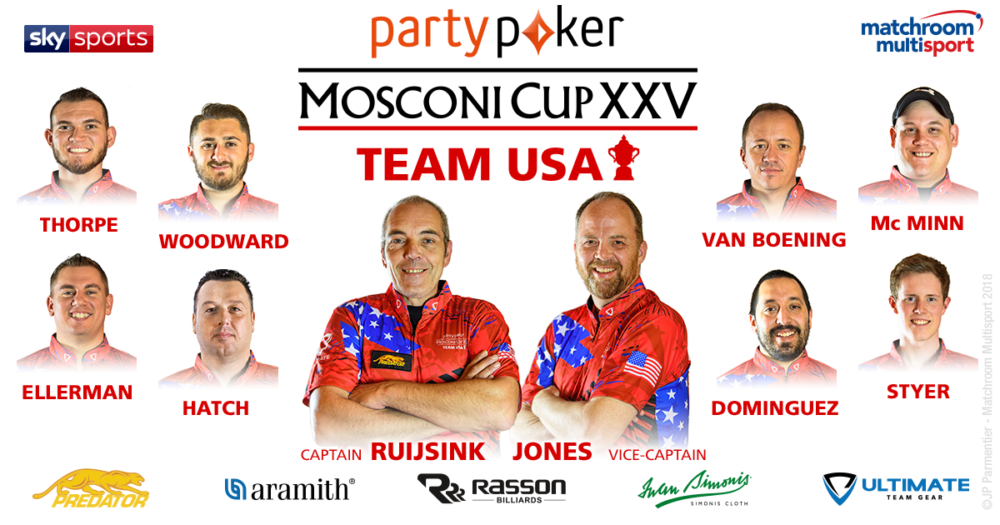 Team USA captain Johan Ruijsink has announced the eight players who will continue to the next stage of training camp as America works towards reclaiming the partypoker Mosconi Cup from Europe at Alexandra Palace, London this December 4-7.

An initial squad of 16 was selected by Ruijsink, and they were later joined by Shane van Boening after the five-time US Open champion reversed his decision not to take part following discussions with Ruijsink.

Ruijsink, alongside vice-captain Jeremy Jones, has now whittled his team down to an eight-man squad who will continue with training camps. They are:

The final five to contest the 25th annual partypoker Mosconi Cup will be selected later in the year.

Ruijsink said: “All players start on zero again and will fight in the next couple of months to get to the last five players. Every player has his strengths and weaknesses and we hope that they will give us a hard time making a choice – we think they will. Every player knows what is needed and is willing to work hard to get there. This is a great group of players.

“Of course it was also hard to not select the other players, because they all had reasons to get in and worked hard. I would certainly like them to push hard to show that we were wrong. If something very strong happens to one of them, we will not hesitate to call upon him again later – after all, although personal drama is unavoidable in a selection process like this, the main target is to win the Mosconi Cup. Nothing more, nothing less.

“We had a couple of conversations with Shane after not including him in the initial group. We found out that we had a lot of miscommunication and he told us that he was willing to commit to the program. So we corrected that by inviting him into the second training camp. He obviously is an asset to the team.

“Billy is playing a lot of international events this year and is a prospect for any selection. Young, driven and a winner by heart.

“Skyler didn’t perform to his potential last year and he is determined to put things straight. We talked about a couple of things and we think we have a better formula for his preparation and for his performance. Of course, he is a great talent.

“Dennis, with his big heart and sweet stroke, played very well last year but had a couple of silly mistakes. Again we will work hard to overcome these small dips and make sure he is fully focussed on every shot.

“Oscar is one year further on and learning all the time, so he is again a better player this year. He is great team player and we will find a way to make him show his best performance on the way to the Mosconi Cup.

“The new players are forcing the seasoned players to play their best. Mitch Ellerman is very solid and an eager player. He has no fear to win and impressed me with his game during the US Open. He is a dream to work with and absolutely wants to get the maximum out of his game.

“Shane McMinn impressed me a lot at the tournaments in Big Dog’s, Iowa. He is a big talent, pots balls easily, a threat for the current top players and willing to work hard.

“Tyler Styer is probably one of the best technicians in the States; deliberate set up and execution, and lots of control, young gun and didn’t play internationally yet.”