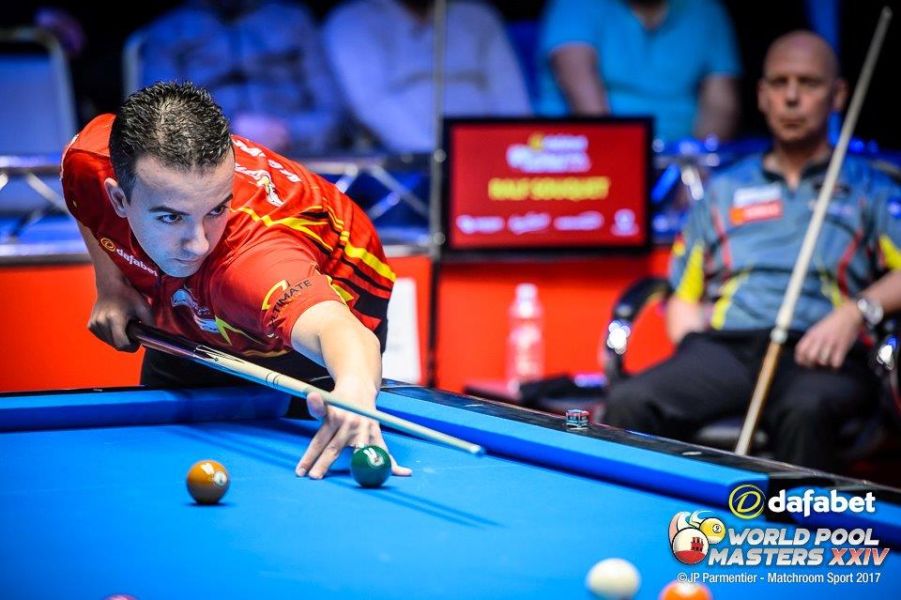 Round one completes as Alcaide fires into semis

THERE WERE two final first round matches as well as the first of the quarter-finals as play continued in Gibraltar at the 24th annual Dafabet World Pool Masters. Taking place at the Tercentenary Hall at the Victoria Stadium, there were wins for Chang Jung Lin, Omar Al Shaheen while defending champion Shane Van Boening saw his glorious run at the event come to a halt as Spain’s David Alcaide romped to an 8-3 win.

Taking place in Gibraltar, the Masters sees 16 top international players competing in the shadow of the Rock of Gibraltar to determine the destination of the $20,000 top prize. The whole event is broadcast live on Sky Sports in the UK & Ireland and on networks around the world.

In the opening match, 2013 Masters champ Niels Feijen endured a stinker to fall at the first hurdle to Kuwait’s Omar Al Shaheen by an 8-3 score line. The Dutchman made some elementary mistakes, missing pots and running out of position. Al Shaheen, though, was as sharp as a tack and looked composed throughout the match.

The Kuwaiti took the first two racks, not wasting anytime as he moved around the table. Feijen then found himself 5-1 down before he mounted a mini comeback including a golden break to get to 5-3.

That was Niels last positive contribution to the match as a couple more mistakes lead to his downfall. Al Shaheen brimming with confidence, finished off the match in style.

“You might not have seen it but inside me I am so nervous because Niels is one of the top players in the world and I got lucky because it wasn’t one of Niels’ best days,” said Shaheen.

“When you play Niels and you play that well, it gives you more confidence for the rest of the tournament. I will watch Chang and Gray, they are both tough players.”

It would be Chang, the World No.2, who the young Kuwaiti would be meeting as the Taiwanese overcame England’s Mark Gray in a high quality hard fought encounter. Both players played well but a couple of errors from Gray made the difference.

“I played solid in general but couple of missed shots hurt me. He didn’t miss which is what you expect from the Current World No.2,” said Gray.

The final match of the evening was the first of the four quarter-finals as Shane Van Boening looked to extend his winning run at the Masters to ten matches with David Alcaide standing in his way. With the balls racked by hand and with the one on the spot, players were finding that they needed to give it a good old fashioned dig.

Both players were performing well and at 3-3 the match was finely poised. Alcaide though took the next to reclaim his lead but scratched off the break to present ball in hand to Van Boening. He couldn’t capitalise as he hit the six ball instead of the two and with ball in hand, Alcaide converted for 5-3.

The Spaniard piled the pressure on Van Boening who was starting to feel it as the match went away from him. In the end, the focused Alcaide came with some great shots to close out the match with an 8-3 win.

Alcaide said; “Everybody knows against Shane I would need to play 100 percent. I think I lost one position in the match but otherwise I played perfectly. When I broke I maybe got a little bit lucky but you need some luck in pool.”

There are a total of five sessions of play and all tickets are available here or on the door.

Down to the last four in Gibraltar