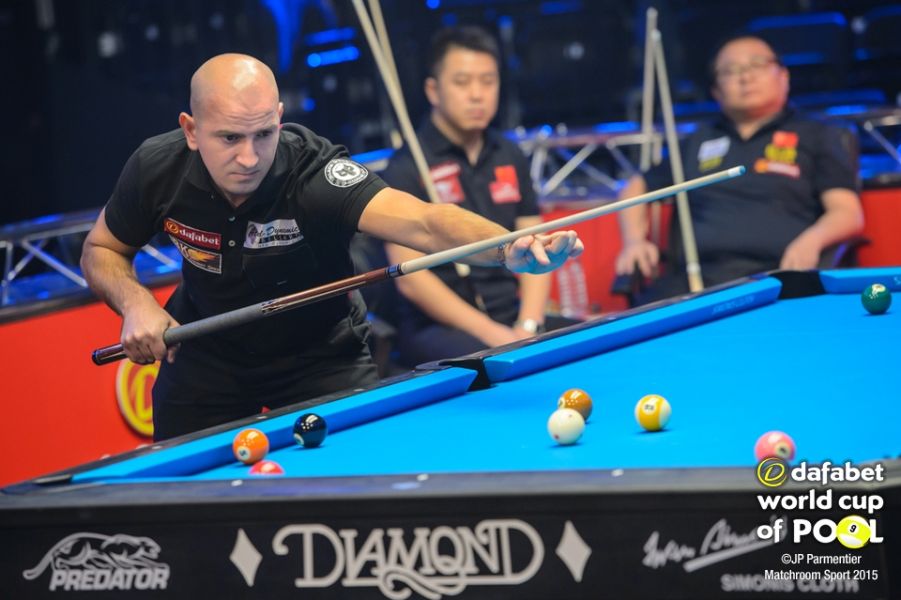 THE 2015 DAFABET WORLD CUP OF POOL got underway today with three first round matches and there were a couple of upsets as two-time champions China crashed out to qualifiers Romania and then France squeezed past the seeded Canada in a deciding rack.

No.8 seeds China had a torrid time of it at the hands of qualifiers Romania who were making their debut in the competition. They put on a tremendous show to take the match 7-4. In 2011 the Chinese as defending champions crashed out to qualifiers Switzerland in Manila and it was a similar story this time.

The Romanian pair of Babken Melkonyan & Ioan Ladanyi looked in control throughout the match and they moved into a 4-0 lead to leave their opponents – Liu Haitao and two-time World Cup of Pool winner Li Hewen – looking bemused.

The Chinese got it back to 4-2 and then 6-4 but the Romanians never really looked in trouble as they showed no sign of nerves in front of the cameras as they closed out the match.

Having won a tough qualifying event with 20 competing teams, the Romanians were delighted to have made such a positive impact.

“We played we played well and only made one mistake each – the rest of the game was satisfying and I am very happy we won because this was Romania’s first participation in the World Cup of Pool,” said Babken Melkonyan.

“In a race to seven it is important to win the first rack. We got a 4-0 lead and we had a chance to make it 5-0 but I scratched but we recovered to win the match.

“I will watch Germany play Indonesia tonight – I think I will watch all the matches because there are some nice matches with great players. Germany has Thorsten and Ralf who are great players. I have watched Ralf since I was young and began playing pool. He is one of my idols”

In the final match of the session the French pair of Stephan Cohen and Alex Montpellier enjoyed a great win over the Canadian pairing of Jason Klatt and John Morra. The match was tense and nervous with plenty of errors but exciting nonetheless.

France led at 4-3 but that soon became 5-4 to Canada and then 6-5 to France as both teams felt the pressure. Canada levelled it and then broke for the match but Klatt scratched to give France the table. There was plenty more drama in the rack but in the end it was Cohen who potted the winning 9 ball for the victory.

Montpellier was relived to get over the line in such a topsy turvey match: “The last rack was crazy, I couldn’t think and it was very nervy. Whoever we play next isn’t important because it is about how we play together.”

Cohen added, “There was a lot of pressure at the end and we had a bit of luck with some shots, and they made a few errors. But that is 9-ball, it is always the same story.

“Now it is different because everybody we have played has won in the tournament and is more relaxed. We will be more relaxed too and we have two days to practice. We feel a lot better now we have the first win.”

The Korean pair of Jeong Young Hwa & Ryu Seung Wu won a ding-dong opening match of the tournament against Malaysia as they lead 5-0, looking in command before a series of misses and errors turned it into a 6-6 thriller. Neither side looked comfortable and there were missed pots and poor positional play from all four players as the match became nervier and nervier.

The Malaysian pair of wily veteran Ibrahim Bin Amir & novice teenager Kok Jken Yung somehow found their way back to 5-5 before a missed 4 ball with ball in hand gave Korea a 6-5 lead. They couldn’t take advantage from the break but Malaysia, breaking for the match returned the favour as they too couldn’t convert as Korea ran out winners.