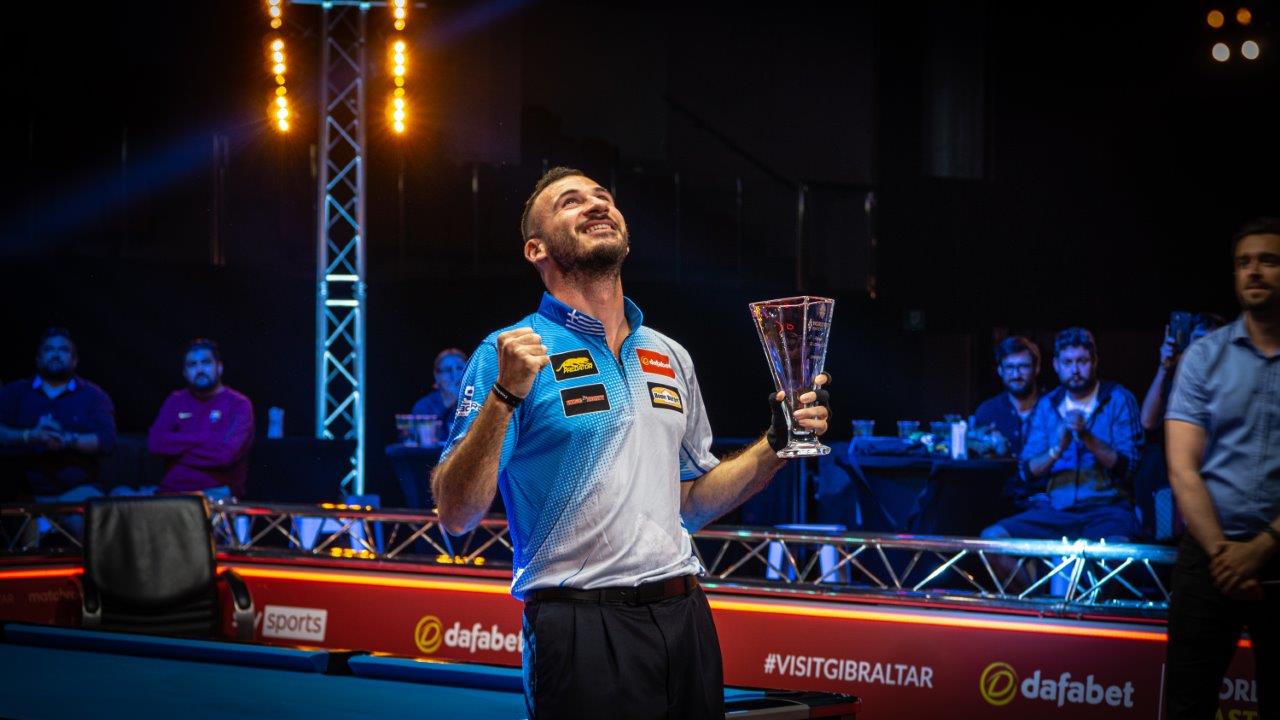 REDEMPTION FOR KAZAKIS AS HE WINS DAFABET WORLD POOL MASTERS

Alex Kazakis banished painful memories of losing the last Dafabet World Pool Masters final as he whitewashed Shane van Boening 9-0 to lift the 2021 title at Europa Sports Park in Gibraltar, the biggest margin of defeat in a Masters final and the first final whitewash.

Kazakis lost position on the 9-ball against David Alcaide in the 2019 final and at hill-hill was rooted to his seat as the Spaniard banked a dramatic 9 for the title. This time, though, there was no such drama in the final – that had come in a 7-6 semi-final win over Eklent Kaci – as the Greek controlled the table and did to Van Boening what the American himself had done to so many others when he won back-to-back Masters titles in 2014 and ’15.

“I can’t really believe it,” said an emotional Kazakis. “It is amazing. Everything went my way from the start to the end of the final. The big moment was in the semi-finals; I didn’t play well, I was nervous, and I was lucky that Kaci didn’t really play that well. It was the luckiest match I ever won. To go into the final with that momentum, I had nothing to lose.

“Sometimes when I was under pressure I was thinking I was maybe going to do it again, and it has been hard. Finally the door opened. When you are always knocking the door, the most difficult part is to win the first tournament. I think now it will be much easier for me if I have the chance to win a major tournament.

“I feel lucky, I feel blessed, it is the biggest title of my career. A lot of people here told me they were routing for me, I think because I didn’t win it in 2019.”

Kazakis had struggled in his semi-final against Kaci, finally getting over the line in a gripping hill-hill thriller that made up for in drama what it lacked at times in quality. The Greek, however, had used his break well and looked much more calm and assured at the table in the early exchanges of the final and took the first two racks.

Van Boening had also come through a hill-hill semi-final, beating Mosconi Cup foe Joshua Filler. He had an opportunity in the third rack of the final after Kazakis missed the three, but the cut was tough and the American couldn’t make it. Kazakis completed the rest of the rack with the help of a nice 7/8 combo and the beaten 2019 finalist was 3-0 up.

Two years ago Kazakis got to 5-0 up before eventually succumbing 9-8 to David Alcaide, and he reached the same advantage again with a break and run. After pushing out and being put back in by Van Boening, Kazakis played a good safety which earned him the chance to move 6-0 up, and now his advantage was bigger than in the last Masters final.

The American finally got another chance in the seventh but missed the 6 ball to the top left and Kazakis cleared for a 7-0 lead, and that was soon 8.

Van Boening had one last opportunity in the last, but having jumped the 1 he missed the 2, and the night belonged to Kazakis. He let out a jubilant, relieved, celebration, high-fived with a crowd who were clearly pleased to see his redemption tale, and then jumped on the Rasson table to show his delight at winning the $25,000 title.

The next Matchroom Pool Series event is the World Pool Championship, which runs from June 6-10 at Marshall Arena, Milton Keynes. Spectators are permitted for the final day. Tickets are priced at £25 and are available at www.matchroompool.com

DRAW MADE FOR WORLD POOL CHAMPIONSHIP