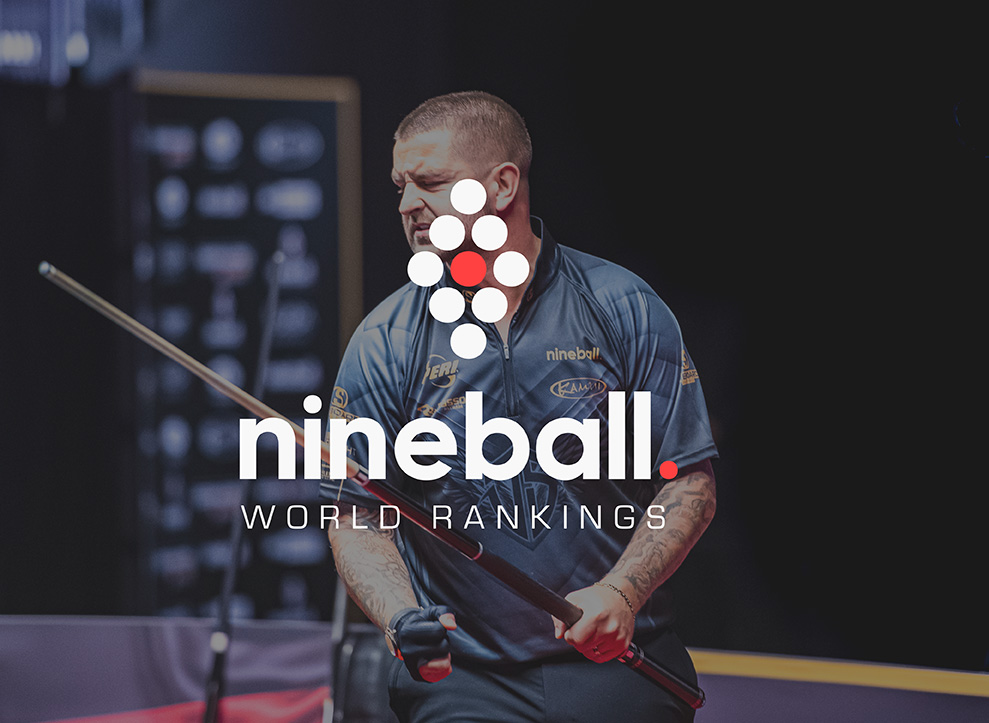 The race for the final two automatic spots on Team Europe and Team USA respectively for the 2022 Mosconi Cup at Bally’s Las Vegas from November 30 to December 3 is heating up with only two ranking events left for players to book their spots off the Live Nineball World Rankings.

Shane Van Boening and Joshua Filler became the first names on the rosters of Jeremy Jones and Alex Ley after the inaugural European Open back in August with two further names to be confirmed for both sides after the conclusion of the US Open Pool Championship set to get underway on Monday, 10 October to Saturday, 15 October with the winner set to take home $50,000. Once the two automatic spots are filled, Jones and Lely will then get two wild card picks to complete their sides ahead of Pool’s biggest rivalry.

Francisco Sanchez Ruiz’s meteoric year has seen the 2022 World Cup of Pool winner move into pole position to take the next spot on Team Europe thanks to a run to the final of the Slovenia Open on the EuroTour before losing out to Filler. The Spaniard sits on $63,240 going into the Sandcastle 9-Ball Open and US Open ahead of European Open winner Albin Ouschan on $61,800.

Ouschan meanwhile has been a stalwart of recent Mosconi Cups with the Austrian on the winning side for Lely’s side for the last two editions. Despite the disappointment of losing out on defending his World Pool Championship crown in April at the hands of Van Boening, he had sweet revenge by beating the American great in the European Open final in August.

It’s hard to find someone who has put in the Air Miles that Mario He has done in the last 10 months with the two-time World Cup of Pool winner putting himself into the mix with a campaign that saw him reach the semi-finals of the European Open and quarterfinals of the UK Open along with a semi-final run at the Super Billiards Expo Nineball Open in the USA. Currently World No.5, He’s $38,965 total sees him trail Ouschan by $22,835 but a good run at the US Open that betters his former World Cup of Pool partner could see him pip his compatriot to the last automatic spot.

Elsewhere, Alexander Kazakis is looking to return to the Mosconi Cup fold for the first time since 2019 where he tasted defeat in Las Vegas. The 2021 World Pool Masters winner has shown his resilience time and time again and sits in the picture at $31,770 to well within the picture to steal back the blue and yellow jersey of Europe.

Two-time Mosconi Cup MVP and 2017 US Open champion Jayson Shaw has been working hard on and off the table to be in the best position to defend his Mosconi Cup MVP status. Shaw thrives in the Mosconi Cup environment and will not want to be missing out on a ticket to Bally’s Las Vegas come November. He sits at $22,205 going into the US Open knowing one final push could see him avoid the worry of being in the mix for a wild card spot.

DOMINGUEZ AND WOODWARD GO FOR A REUNION FOR USA

Oscar Dominguez has two Mosconi Cup appearances to his name dating back to 2009 with his second coming in 2017 with the fondest of those being the former thanks to victory as a 21-year-old winning three of his six matches as the USA romped home to a 11-7 win. He will be hoping to return for a third edition with a strong showing in Atlantic City next week. Dominguez sits in the best position of the American contingent with runs to the Last 32 of the European Open and semi-finals of the last edition of the Sandcastle Open helping him along the way.

Another two-time Mosconi Cup MVP is in a similar position to Shaw as Skyler Woodward looks to make it an eighth successive Mosconi Cup at the age of 29. Woodward by his own admission hasn’t had the best of years and will be looking for better fortune at the US Open next week, a tournament where he fell at Losers Round 7 last year. He was arguably Team USA’s star performer in their defeat to Europe in December 2021 leading in moments where their chips seemed to be down so a good run in Atlantic City could see him book his spot.

The USA have plenty of runners and riders with the likes of Billy Thorpe looking to force their way back into contention for Jones’ roster. Thorpe missed out in 2021 but carries an impressive record since his debut in 2017 with nine wins to his name from 21 matches. Meanwhile, Shane Wolford’s stock has been rising with many turning to the youngster as a potential breakthrough star. Wolford carries the junior pedigree, but all eyes are on his next move to take his game to the next level. At World No.55 on the Nineball World Rankings, a good run at the US Open could see him break into the World’s Top 32 and a maiden Mosconi Cup appearance.

Elsewhere, Nicholas De Leon, Greg Hogue, and Danny Olson sit on the periphery inside the Top 60 with a huge week ahead whilst Tyler Styer will be hoping to return to a familiar hunting ground in Las Vegas come December having been on the winning side in the cup’s last visit to Sin City.

Earl Strickland is one name who shouldn’t be forgotten either, the veteran missed out on last year’s Mosconi Cup due to close contact with a positive COVID-19 case so will be looking for redemption if he can force his way into Jones’ thinking. Strickland will be returning to the US Open as the all-time champion alongside Van Boening.

WATCH THE US OPEN POOL CHAMPIONSHIP

All times are local time (ET)