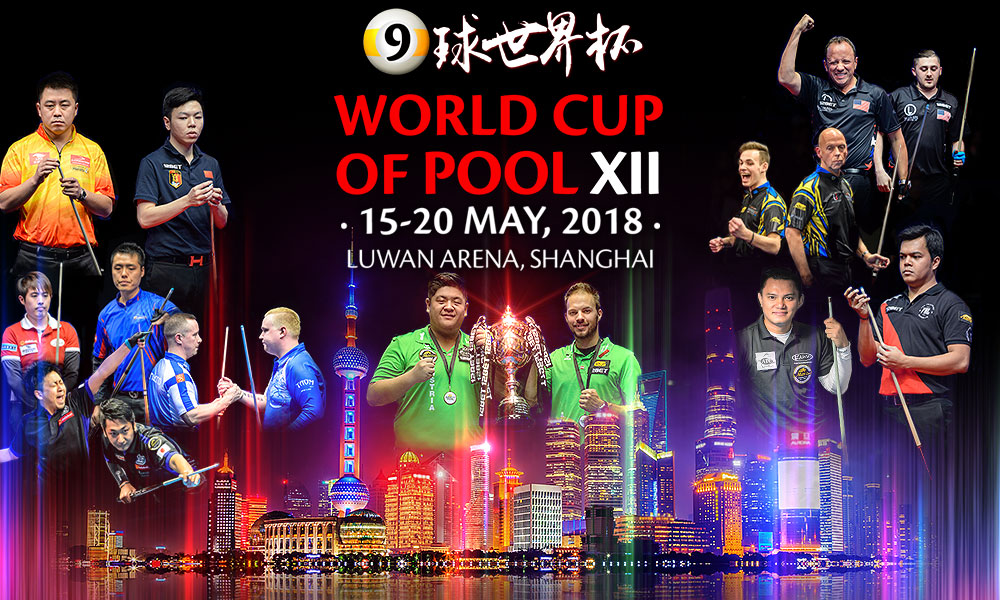 Pool’s biggest tournament breaks off in Shanghai, China this week as the World Cup of Pool returns to Asia after six years in Europe.

This year’s hosts last tasted World Cup success in 2010 when Fu Jianbo and Li Hewen took the title in Manila, three years after the same pair had won China’s first title. The tournament enjoyed a four-year stint in the Philippines before returning to Europe but is back in Asia this week for its 12th edition.

Familiar pairings have benefitted Finland, Germany and Holland over the tournament’s history and Austria hope that a fourth consecutive coupling of Albin Ouschan and Mario He will see them be first nation to successfully defend the title.

Ouschan and He stormed to victory in a sweltering York Hall, London last summer. They saw off Sweden, Russia and hosts England before an impressive and near-faultless 9-1 win over Chinese Taipei at the semi-final stage. They came up against American duo Shane van Boening and Skyler Woodward in the final and after a nip-and-tuck opening surged ahead in the second half of the match to claim the trophy with a 10-6 victory.

“We had many ups and downs last year and of course some luck to win to the title but we also fought a lot, especially in the quarters where we both didn’t feel good at all,” said Ouschan, the 2016 WPA World 9-Ball Champion.

“We know each other’s game very well and know how to talk with each other. We all know at the World Cup of Pool everything is possible. We will go from match to match and see what happens.

“Every team is a big rival because race to seven is quite short, but of course the main rivals are the Asian teams, and USA.

“I like Shanghai a lot. I have been here a few times for the China Open, and of course since I won the China Open in 2015. It’s always nice to come back.”

Two of those aforementioned familiar pairings – Holland and Germany – have been broken up this year. Two-time runners-up Holland are without Nick Van den Berg, who has retired his cue, paving the way for EuroTour regular Marc Bijsterbosch to join World Pool Masters champ Niels Feijen.

Feijen took his second Masters title against the odds in Gibraltar in March. The four-time Mosconi Cup MVP was playing his first major tournament after a six-month layoff caused by tendonitis and almost withdrew from the event before it began but displayed some of his best form as he defeated Raj Hundal, Dennis Orcollo, Karl Boyes and Van Boening to lift the title.

“The World Pool Masters was a dream that came true after the injury, admitted ‘The Terminator’. “I had a 10% chance to play in it a few weeks before the event. I did enter and won the whole thing with great play from the semis. It was like a movie script really.

“Nick and myself had a great run and played eight World Cups and had two finals. I feel it won’t be very hard to adjust to another player because if you’re in this event you know how to play pool, so it’s just a matter of putting some practice in together, setting some guidelines and trusting one another.

“I know Marc well, we play on the same team in the German league. He’s a great kid and has a monster break. We practiced very well last weekend for a full day and have two more days in China to test ourselves before our first match.

“What helps is that you get a lot of table time in the arena and that might help us to settle in fast during the World Cup. However, this format is cutthroat with the race to seven so as always you need a bit of fortune.

“I see ourselves doing some good damage. The biggest thing is to get to the quarters first, where the race will be a bit longer. I am looking forward to it a lot and I know Marc is too.”

‘The Kaiser’ Ralf Souquet, too, has a new partner but Joshua Filler is no stranger to this stage. Eleven months ago he arrived on the international scene winning the WPA China Open in Shanghai, the city now playing host to the World Cup.

The 20-year-old then became the youngest ever Mosconi Cup player – and winner – in December and he even took home the MVP award as Europe swatted away hosts USA in an emphatic 11-4 success. Souquet also played a starring role in Las Vegas, though a doubles partnership with compatriot Filler was not called upon before Europe sealed their win.

Souquet may not have his fellow 2011 World Cup winner Thorsten Hohmann by his side but the Hall of Famer says he’s already clicked with his young partner and believes their contrasting playing styles could work to Germany’s advantage.

Souquet said: “It won’t take too much time to adjust to my new partner Joshua Filler, because it’s a short race to seven in the first couple of rounds. Joshua and I actually had a very good three-day practice session together and it clicked right away.

“Of course we both have completely different styles in playing and approaching the table, but that could actually be helpful in many situations.

“Our draw is not easy with Indonesia in round one – they beat us two years ago in the opening round. But if things go well and we are able to find our rhythm right in the beginning of the event, we can definitely do some damage.”

Hosts China are coming strong in search of a second World Cup title. Wu Jiaqing remains the youngest player ever to become World Champion, taking the 2005 title at the age of 16 while Liu Haitao was China’s best performer at December’s World 9-ball Championship.

Chinese Taipei were winners in 2015 and will be represented this year by Chang Jung-Lin, a runner up at last year’s China Open, and Cheng Yu-Hsuan. One of the strongest nations in 9-ball, they are once again among the tournament favourites.

Philippines have won the tournament more times than any other nation. Victorious in 2006, 2009 and 2013, this year they boast World 9-Ball Champion Carlo Biado in their ranks, alongside tournament debutant Jeffrey Da Luna. Other Asian hope comes in the shape of China’s second team – qualifiers Dejing Kong and Ming Wang – and the familiar Japanese pairing of Naoyuki Oi and Toru Kuribayashi.

Oi in particular has become famous for his off table theatrics – a series of his hilarious post-match interviews have gone viral – but on the table Japan are a force to be reckoned with. They have achieved two quarter-finals and a semi-final in the last four World Cups and they’ll hope to benefit from that same familiarity which has seen so many of Europe’s top teams reach World Cup finals.

USA came close to a second title in London last summer. Van Boening’s name is on the trophy alongside that of Rodney Morris from 2008 and last year he took silver with Woodward, the same partnership which competes for the Stars and Stripes in Shanghai.

Elsewhere, England enter a new pairing in the form of Mark Gray and Imran Majid. Both have plenty of experience under the Matchroom TV lights and will back each other to land England’s first title since Darren Appleton and Karl Boyes delivered in 2014.

Zaja won a qualifying tournament to join Kaci in Shanghai so is clearly in form, while Kaci holds a commanding position on the Mosconi Cup rankings which means this is likely the first of many appearances in Matchroom events for the 19-year-old.

All the action takes place at Luwan Arena in Shanghai’s Luwan district. The tournament commences at 13.30 local time on Tuesday, 15th May and is broadcast live on CCTV in China, Sky Sports in the UK, Eleven Sports in USA and across Asia on Fox. Full TV Broadcast details can be found here: https://matchroompool.com/world-cup-of-pool/#watchlive

Tickets for the 2018 World Cup of Pool are still available at https://matchroompool.com/world-cup-of-pool/#tickets. The full draw, schedule and teams can be found at www.worldcupofpool.com.
The World Cup of Pool is sponsored by the following suppliers: IWAN SIMONIS (Simonis cloth), SALUC (Aramith balls), STAR (Table) and PREDATOR (cues).