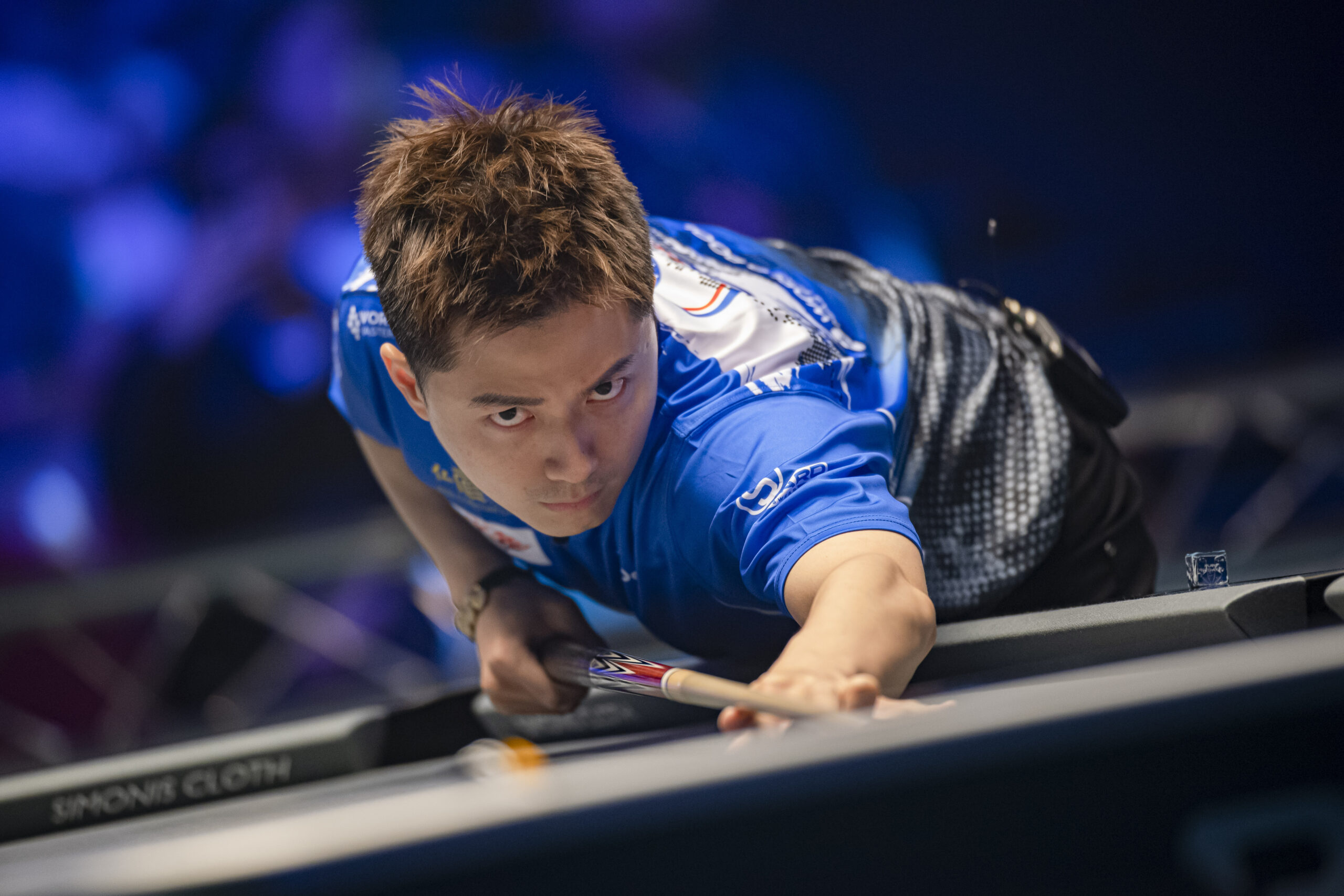 Ko Pin Yi downed David Alcaide to reach the quarter-finals of the 2022 World Pool Masters at the Europa Point Sports Complex, Gibraltar live on Sky Sports, DAZN, Viaplay, and Matchroom.Live in selected countries as Mieszko Fortunski and Abdullah Alyousef also made their way through to the next stage.

Pin Yi was up against two-time winner Alcaide and the former world champion didn’t seem too fazed by his opponent’s credentials as he amassed a 5-0 lead. Alcaide was glued to his chair after initally winning the lag but the Spaniard scratched on the break. The following racks were a clinic in breaking by Pin Yi as the 32-year-old’s game gathered pace. There was a route back into the Race to 7 for Alcaide in the sixth rack when Pin Yi found himself with nowhere to go on the two ball. A brief safety exchange later, Pin Yi looked to be closing in to make the hill but a simple miss on the seven was the gift Alcaide needed to get on the board at 5-1 but with still plenty to do.

For Alcaide, there was a routine run out in the seventh to be three behind but fully aware of Pin Yi’s stronghold on the game. Alcaide broke in the eighth but missed the bank on the one ball and made it safe somewhat. That proved to be Alcaide’s downfall though as Pin Yi hooked Alcaide who ended up fouling on the 9 when trying to kick his way out of trouble onto the one. In the process, leaving a 1-9 combo on for Pin Yi to reach the hill which he duly obliged. The drama wasn’t done in this contest yet though as Pin Yi scratched in the following rack on the break to allow Alcaide back in to 6-3. Alcaide missed a simple one to the middle pocket in the next rack and from there Pin Yi secured his victory and a place in the quarter-finals.

Fortunski has already had a blistering week after victory over Jayson Shaw to reach the Last 16 and he doubled up to beat US Open runner-up Aloysius Yapp 7-4 to book a maiden quarter-final birth in Gibraltar against either Albin Ouschan or Francisco Sanchez. Yapp took the opening rack with a golden break but soon Fortunski field back to lead for the second time at 3-2 with a confidence-boosting the fifth rack that saw the Pole bank the one ball like a Bugatti Veyron off the start line. Fortunski comes to Gibraltar trying to replicate what compatriot Karol Skowerski did ten years ago in winning the World Pool Masters.

Yapp seemed to struggle at times with the table conditions but made it 3-3 and put Fortunski back under it. The 2022 World Cup of Pool is not too far away where Fortunski will be flying the flag for Poland and with some supporters in the arena, they saw him reach the hill first at 6-4. On the hill, Fortunski played a delightful 3-6 combo on his way to another mammoth win for the Butcher.

Alyousef is loving life at the moment after a run to the semi-finals of the World Pool Championship, the Kuwaiti received an invite to the World Pool Masters for the first time and he made haste of Niels Feijen yesterday. He goes by the name of Solid Gold and Alyousef kept his wonderful year going with a win over one of the pre-tournament favourites Naoyuki Oi to reach the quarter-finals 7-3. In truth, the pair struggled at the table and a string of errors caused problems for both. Alyousef though was holding his own in the pivotal turning points in the contest. At 1-1, both missed tricky nine ball opportunities before Alyousef struck to lead at 2-1.

The fourth rack was messy with the six, seven, and nine all locked up in the bottom right corner. After Oi made both the six and seven in one shot with a lovely shot, the Japanese man missed the nine and Alyousef led 3-1. Alyousef made the three ball and six as it hung over the pocket but left the cue ball teetering on the edge of the jaw leaving a tough kick on the four ball. Oi put pay to Alyousef’s error to make it a one rack difference. That did prove to be Oi’s last rack though as Alyousef came through to wrap up a 7-3 win.

VAN BOENING AND KAZAKIS OUT OF 2022 WORLD POOL MASTERS