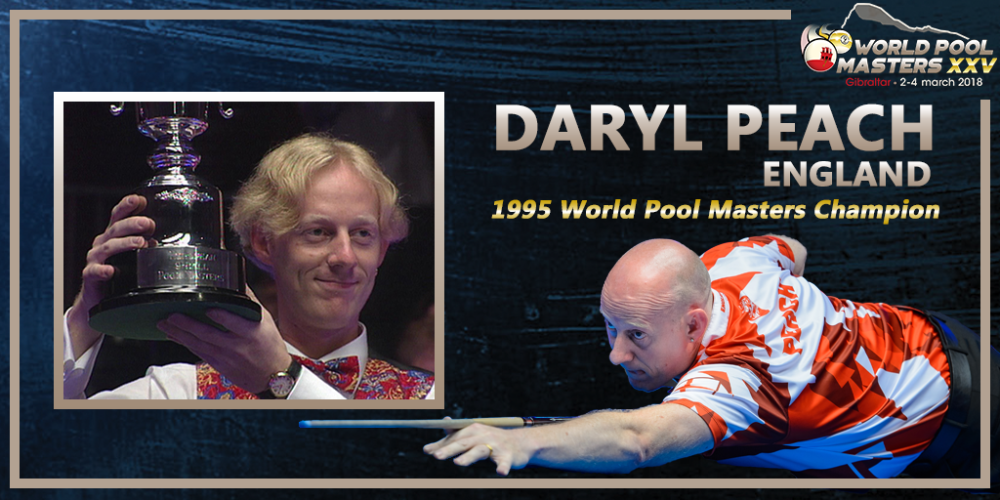 Daryl Peach is the latest former champion to be added to the line-up for the 25th World Pool Masters, which takes place at Victoria Stadium, Gibraltar this March 2-4.

Peach lifted the coveted title in 1995 and went on to be part of Europe’s first Mosconi Cup winning team later that year, his first of two successful Mosconi appearances. The Englishman became World 9-ball Champion in 2007 and has a host of EuroTour titles to his name.

“I was one of the first winners of the World Pool Masters and I believe the youngest ever at 23 years and two months old,” said Peach. “It was at the Winter Gardens in Blackpool and I had a lot of support – great memories from early in my career.

“This year is the 25th anniversary of the World Pool Masters and it’s going to be extra special having many of the past champions in it, meaning a lot of old rivalries will be going head to head. It’s a field full of true champions and it’s probably going to be the hardest World Pool Masters ever to win. But I thrive off having tough competition and I am relishing the challenge ahead.

“The World Pool Masters is one of the most prestigious and longest running events in pool. It’s always one of my goals to perform each season in order to try and make the invite list, so I’m over the moon to be one of the exclusive 16 players battling for this year’s title.”

The 25th World Pool Masters takes place over five sessions at the Victoria Stadium, Gibraltar. Tickets are on sale now at www.buytickets.gi priced between £7-£12 for individual sessions and just £34.99 for a season ticket.