WITH A RELATIVELY poor showing for Europe’s stars at the WPA World 9 Ball Championship in Qatar, there has been minimal movement on the PartyPoker Mosconi Cup ranking list. The highest finisher was Poland’s Wojciech Szewczyk who reached the last eight to earn 15 points and give himself an outside shot at both the World and Combined list.

Albin Ouschan (Austria) maintained his lead at the top of the World Ranking and a high finish at the US Open next month could see him make his Mosconi Cup debut in December. He leads Spain’s David Alcaide by five points with seasoned MC players Mika Immonen and Darren Appleton a further five points back.

The Combined list is still topped by Niels Feijen who was out of the points in Doha but Ouschan is well placed, just four points behind and two events to be played. Those remaining two events are the Dutch Open on the Euro Tour (2nd – 5th October) and the US Open in October.

Taking place from Monday December 7 to Thursday December 10, the Europe v USA showdown is hosted by The Tropicana in Las Vegas and will be the 22nd annual running of pool’s biggest event. Each team is made up of five players – three from the PartyPoker Mosconi Cup rankings with the remaining two wild-card picks. 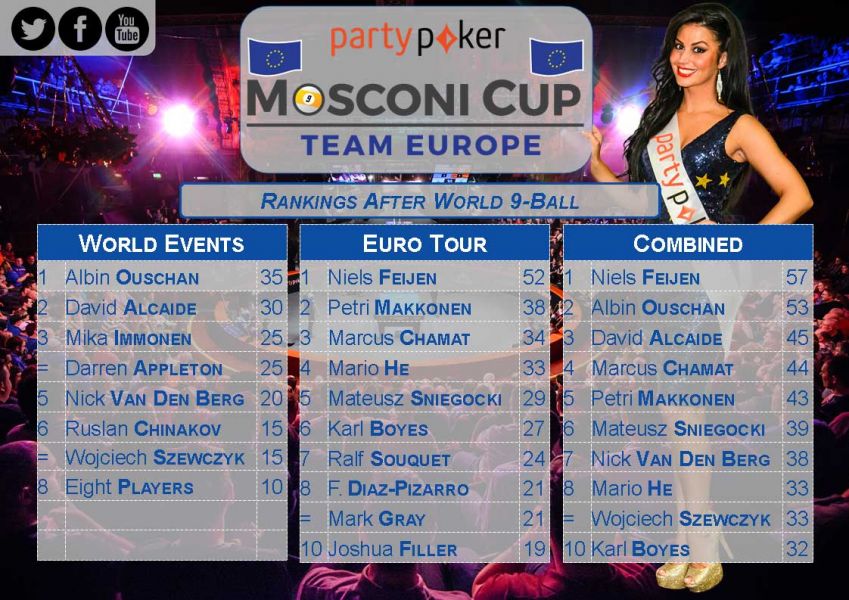