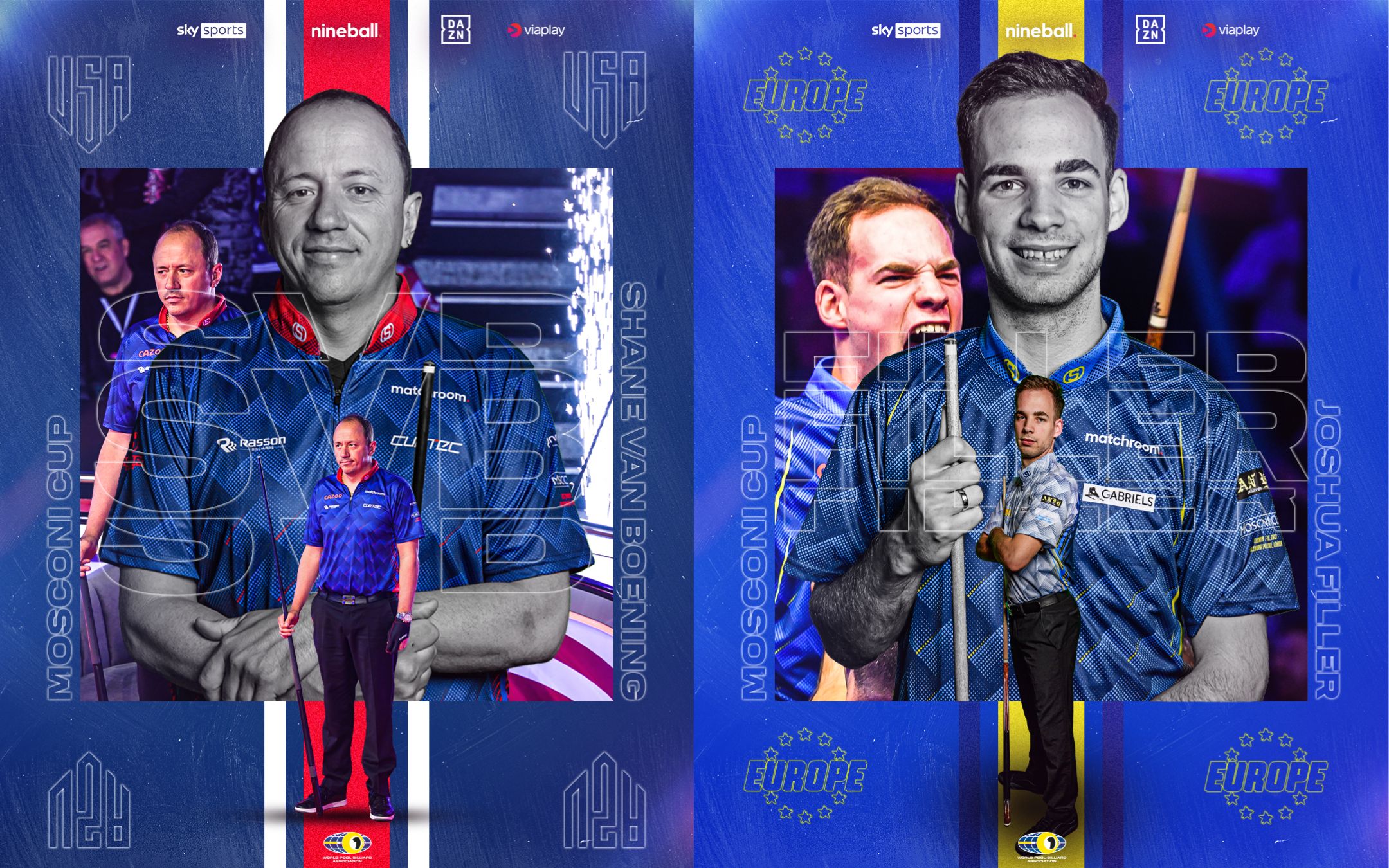 World Champion Shane Van Boening and current World No.2 Joshua Filler are the first two players in history to be selected for the Mosconi Cup based off the Nineball World Rankings for Jeremy Jones and Alex Lely’s Team USA and Team Europe sides respectively with the annual trans-Atlantic tussle set to take place at Bally’s Las Vegas from November 30 to December 3 live on Sky Sports, DAZN, Viaplay, Matchroom.Live and networks worldwide.

Van Boening will be competing in his 16th consecutive Mosconi Cup after making his debut in 2007. The South Dakota Kid has had a year to remember after fulfilling a childhood dream by claiming the World Pool Championship title for the first-time beating Austria’s Albin Ouschan in the final back in April.

Since then, the World No. 1 Van Boening has challenged at the biggest tournaments on the Nineball calendar most recently finishing as runner-up in the European Open as he builds up an unassailable lead at the top of the Live Nineball World Rankings amassing nearly $100,000 in prize money so far.

“It’s the best event every year. I am really excited this year to be back in America with thousands of fans. I want to beat the European team so bad. That’s how I feel when I come to the Mosconi Cup. I want to win. I am ready. You have thousands of people watching. You feel a lot of pressure to tournaments across the world. There’s something about the Mosconi Cup.

Van Boening tasted victory in 2019: “That was the best moment I’ve ever had in my career to make the 1-9 combination to send us on our way to winning the Mosconi Cup for my team, my fans, and my country. It doesn’t get any better feeling than that. I hope to do the same again.”

“I have been playing a lot of tournaments this year. I am feeling less pressure when I go and play tournaments. I am enjoying myself and having fun. I feel like I am on top of my game. I need to work harder and finish the year strong.”

“It’s the greatest feeling in Pool to play the Mosconi Cup. It’s the most exciting event every year. ” – Van Boening

Filler qualified for his fifth Mosconi Cup after Francisco Sanchez Ruiz failed to better Filler’s result in the inaugural European Open Pool Championship at Hotel Esperanto, Fulda in Germany with Filler reaching the quarter-finals before defeat.

The Killer has gone from strength to strength this year claiming both the World Pool Masters and UK Open titles within the space of a couple of weeks to surge up the Live Nineball World Rankings and become the first player for Team Europe picked since the launch of the rankings which shape the game of Nineball worldwide. He pipped Sanchez Ruiz to the first spot by over $18,000.

The German star sank the winning balls as Europe came from behind to defeat the USA at Alexandra Palace back in December 11-6: “To be on the Mosconi Cup team once again is an honor. Last year as a team we had a brilliant time and bonded so well off the table and it just elevated our performance when we got into the arena. I feel more hungry than ever before and I’ve had a year to remember already, I cannot wait to add to that journey in Las Vegas.”

“I know what I can bring to the team and feel like the Mosconi Cup just brings something out of me when at the table. There’s no better feeling than representing Europe at the Mosconi Cup. To sink the winning 9-ball last year is up there in the top moments of my career.” – Filler

Both players will be joined by two further players on each side from the Live Nineball World Rankings after the conclusion of the 2022 US Open Pool Championship at Harrah’s Resort, Atlantic City from October 10-15 2022. Jones and Lely will then get two wild card picks to complete their sides as Mosconi Cup returns stateside for the first time since 2019.

After record sales, there are only limited seats now available to watch the teams compete live in Las Vegas. The new theatre-style arena will be created at Bally’s Las Vegas to accommodate the biggest seating capacity staged for a Pool event in the USA, catering for supporters travelling from far and wide to catch a glimpse of the action. Remaining tickets start from $69 right here.

The 2022 Mosconi Cup returns stateside for the first time since 2019 when the USA secured a famous 11-8 victory over their European counterparts, and they will be looking for a similar scoreline come this fall at Bally’s after back-to-back defeats in 2020 and 2021. Tickets went in record time with now only limited availability in certain sections on certain days.