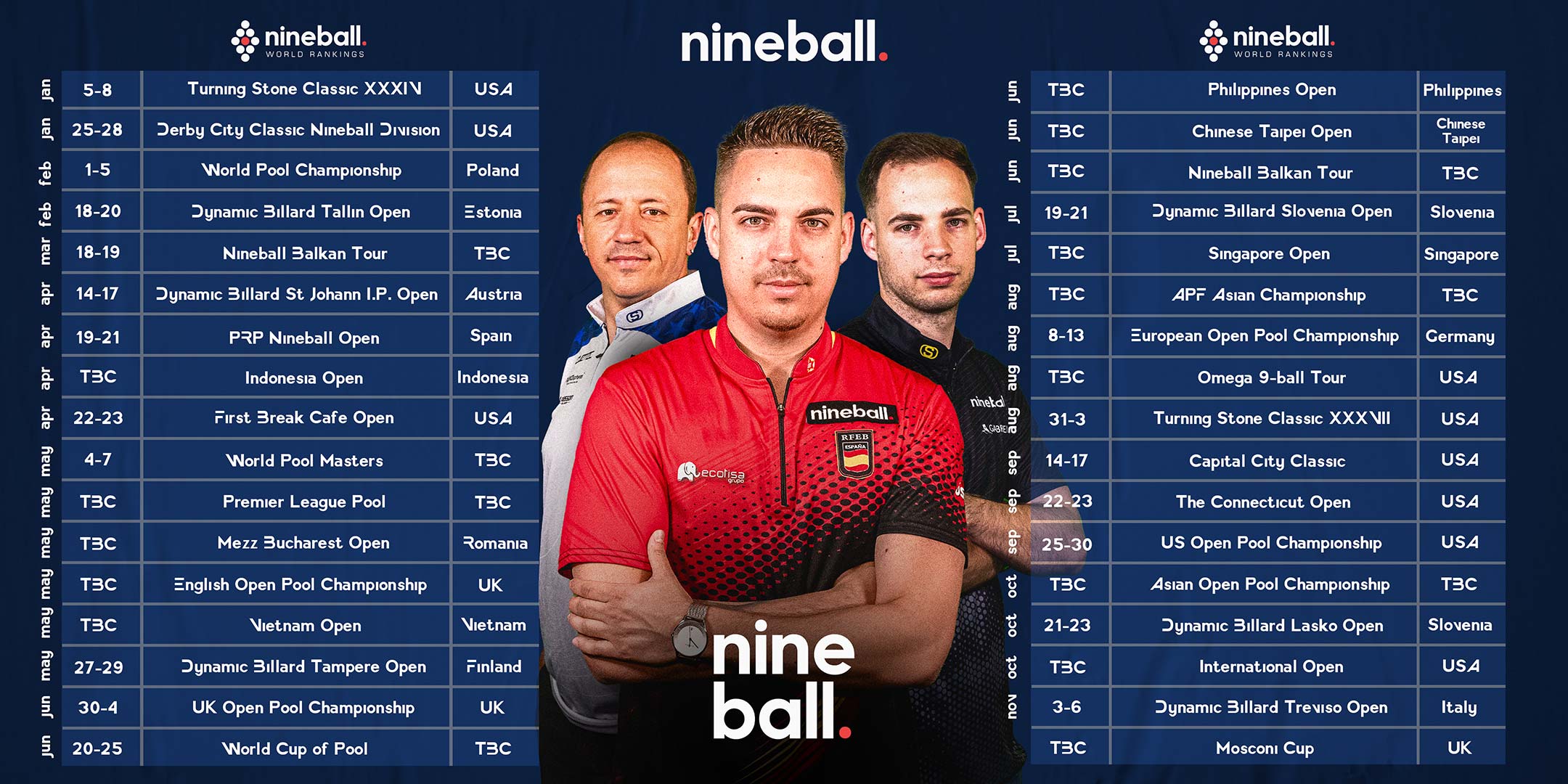 The 2023 Nineball World Ranking schedule is provisionally set and will feature a minimum of 30 ranking events globally including 12 events from Matchroom in ground-breaking news that sees the largest calendar of Nineball events with the aim to keep growing. Ranking events will take place in all four corners of the world thanks to new and existing partnerships as Matchroom Pool continues to offer a transparent, ambitious, and unified plan for Nineball players.

2023 will begin with back-to-back events in the USA with the Turning Stone Classic XXXIV (January 5-8) in Verona, NY followed up by the Diamond Derby City Classic Nineball Division (25-28 January) in Indiana ahead of the first blue ribbon event on the schedule from Matchroom. The World Pool Championship 2023 is set to take place in Kielce, Poland from February 1-5 as the best 128 players on the Nineball World Rankings go toe-to-toe for a slice of the $325,000 prize fund and the chance to become champion of the world.

Matchroom’s flagship events will be the backbone of 2023 alongside UK broadcast partner Sky Sports,the World Pool Masters set to take place from May 6-9 before the UK Open (May 30 to June 4). Spain will look to defend their World Cup of Pool crown  June 20 – 25, whilst Premier League Pool will return as Albin Ouschan guns for the crown for a third straight year. The European Open gets underway at Hotel Esperanto, Fulda in Germany from August 8-13 ahead of the historic US Open Pool Championship at Harrah’s Resort, Atlantic City (September 25-30). As ever, the schedule will build up to the big one, the 2023 Mosconi Cup as the USA look to snatch the trophy back from Europe’s hands for the first time since 2019.

For the first time, Matchroom will also launch an additional two new multi-table open events in 2023 including the inaugural Asian Open and the English Open, each boasting a total prize fund of $200,000, 256 size player fields, and worldwide television exposure.

Two new Juniors events will be launched alongside the SVB Junior Open with more details to come in the new year.

Matchroom’s commitment to offering opportunities to players worldwide has been underlined with a new strategic partnership with Asian Pool Promotions which sees the launch of the Nineball Asian Tour. Working with Matchroom, the APP will offer players across Asia and beyond to compete for vital ranking points with events in Singapore, Indonesia, Vietnam, the Philippines, Hong Kong-China, Thailand, and Chinese Taipei in 2023.

Six events from EuroTour will feature for the second year with the EPBF’s plans including ranking events in Estonia from 18-20 February and St Johann in Austria from 14-17 April. Other stops include Tampere, Finland in May before Slovenia in late July and October. Italy’s Treviso will wrap up EuroTour tournaments for 2023. 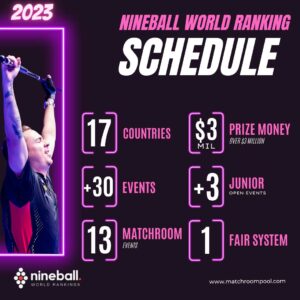 Players in the USA will have more opportunities than ever before to earn Nineball World Ranking points with Omega Billiards set to run a minimum of two ranking events in 2023 whilst two-time Mosconi Cup MVP Jayson Shaw will host a ranking event for the first time from September 22-23 ahead of the US Open. The First Break Cafe Open in Virginia will also feature for the first time as a ranking event with more news set to come soon on additional ranking events in the USA. Mike Zulgan will host another Turning Stone Classic from August 31-3 September before Pat Flemming’s International Open will run again in late 2023 as a Nineball World Ranking event.

Alongside the EuroTour, Matchroom is pleased to announce a strategic partnership with promoters in the Balkan region that sees the start of the Balkan Tour with tournaments across Croatia, Serbia, Bosnia & Herzegovina, and more.

Other European events include the return of the PRP Nineball Open in Zaragoza, Spain won by Mario He earlier this year.

Not only will Ranking Events in 2023 offer vital points for the Race to the Mosconi Cup for European and USA players but it will also offer pathways to the other huge invitational tournaments on the calendar including the World Pool Masters, World Cup of Pool, and Premier League Pool for the leading players worldwide on the Nineball World Rankings. Cut-off dates and the selection criteria for invitational events will be revealed at the beginning of 2023.

THE NINEBALL WORLD RANKINGS WILL BE ON A 2-YEAR ROLLING LIST THAT STARTED 1, JANUARY 2022.