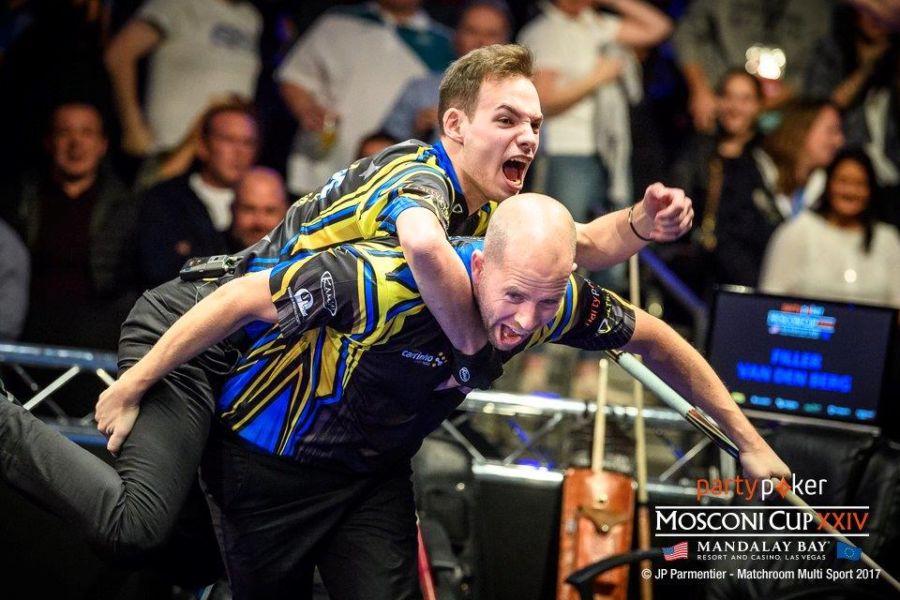 US hopes in tatters as Europe’s hammer falls

THE PARTYPOKER MOSCONI CUP has hit the halfway stage and it’s already looking all over as the Europeans home in on their eighth successive victory following another easy day on the table against a miss-firing American side.

With the Euros leading 4-1 at the overnight stage anything other than US overall victory would be a huge setback and so it turned out as the European’s once again decimated their opponents 4-1 to carry an 8-2 lead into the third day.

“The way the first match was, I was thinking if we could win two matches today I would be happy because we would still have the lead. Winning 4-1, I am way over the moon,” said a delighted Chamat.

“The second match could have gone either way. The eight ball that Oscar missed, we might look back at a big swing in the event. It is far from over but that could be a big swing. This is sport and we saw today that one mistake can turn things around,” he added.

Things started off so brightly for the USA as Dennis Hatch and Billy Thorpe squandered a 4-1 lead before hanging on in the deciding rack to record a 5-4 victory over Nick van den Berg and David Alcaide.

That momentum didn’t last long as Oscar Dominguez lost a 3-2 lead to fall to veteran Ralf Souquet by 5-3. After that it was a total collapse as the USA managed to win just three racks in the final three matches as Joshua Filler ran rampant.

The 20-year-old German looks set to be one of the game’s brightest stars his shot-making and positional play look to be up there with the best. First, he teamed up with Jason Shaw to dispatch Van Boening and Dominguez 5-1 and then, alongside Nick Van den Berg, they crushed Van Boening and Thorpe 5-0.

Commented Marcus Chamat, “I get goose bumps just talking about Joshua. When you see him play, you know he will run out and go around smiling. He makes the game look so easy. Once in a lifetime you get these players.”

For American captain Johan Ruijsink, it was more misery after the experience of Monday; “We are not happy. We didn’t look confident today, we broke better, I really felt that we broke better but we missed balls that we shouldn’t have, and that is disappointing.

“It is hard to win if you get bad racks and in the last match we didn’t do much wrong but they played very good shots and broke well. We got a couple of terrible, difficult shots, which we didn’t make.

“Even the 5-4 win was not confident – we should have beaten them 5-1, 5-2. We should have put our foot on the gas pedal but we didn’t and that stayed there for the whole day.

“I truly felt that we broke better and if we had played as we did yesterday we would have got more points, but we didn’t. It is a learning curve and we will try to combine the better play from Monday and the break from today, but we cannot lose the day tomorrow – that is obvious.”

Europe one away from another victory