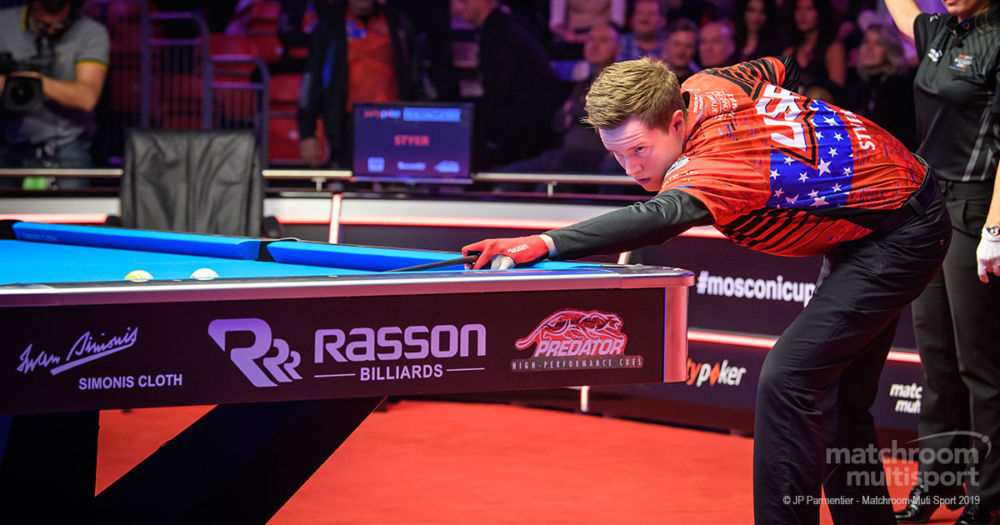 Coach Johan Ruijsink has selected Tyler Styer as the third player to join Team USA as they bid to defend their partypoker Mosconi Cup title at Mandalay Bay Resort and Casino Convention Center, Las Vegas this November 25-28, live on Sky Sports and DAZN.

Styer was a pivotal part of the American team which regained the Cup from Europe in London last December, and last month won his first international title when he beat David Alcaide in the final of the Kremlin Cup.

Styer joins Shane van Boening and Skyler Woodward as confirmed members of the team, with one more player to be announced on Thursday and the fifth and final squad member to be selected following the conclusion of the International 9-Ball Open in November.

“It feels like a dream come true,” said Styer. “I’m honored to play for Team USA under Johan Ruysink, with teammates like Shane and Sky.

“Being out there with veteran role models like Shane and Corey in London, while simultaneously being with my good friends Sky and Billy, was pretty cool. If you would have told me ten years ago that I would have been out there for that moment, I probably wouldn’t have believed you.

“This year we need to play better than last year and keep the pressure on Team Europe by making less mistakes. Being the home team in any sport is always an advantage. I can’t imagine the fans being quiet after last year’s result; I think they will help us a lot.”

Coach Johan Ruijsink said: “Tyler was the player with the least international experience. Considering the level he showed last year and his eagerness to learn and improve, it was obvious for me and JJ that his maximum potential had not been reached yet.

“This year he made some good and important steps, with good results at big tournaments. Of course, the win at the Kremlin Cup during the Russia trip was the pinnacle of that success so far. However, when you talk with Tyler he will tell you that he needs to improve and needs to keep working on his game. This attitude should be the standard for every player with ambition.

“I believe that this guy is here to stay and hopefully will inspire more and more American players to adopt this attitude and become great players.”