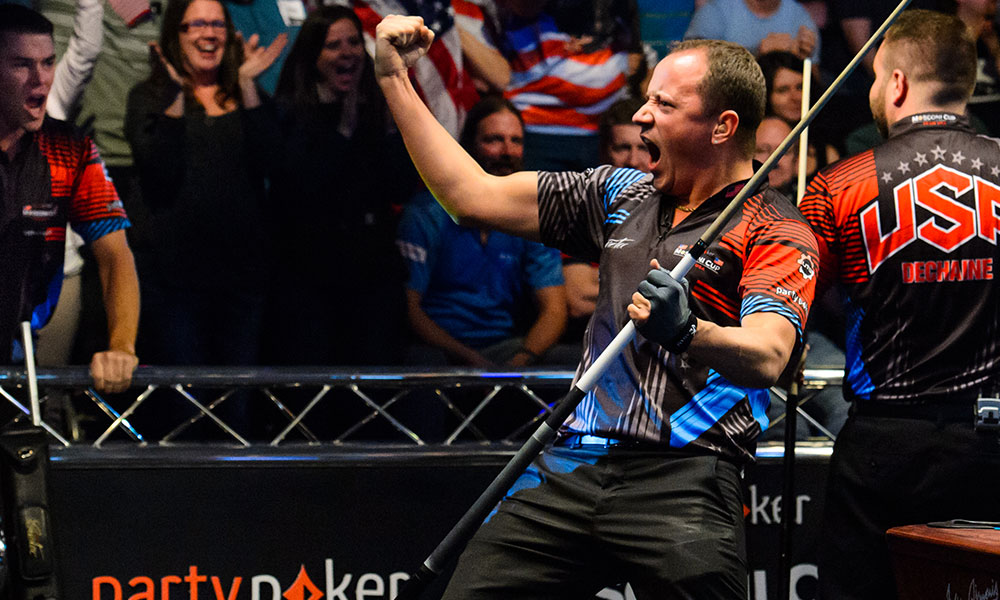 WITH A SPATE of three Mosconi Cup ranking events taking place over the past two weeks, it’s still Shane Van Boening who looks a certainty to be making his tenth appearance in Team USA colours. The South Dakota Kid took top honours at the Tornado Open in Florida to give himself a huge lead 77 point over second placed Skyler Woodward.

Van Boening would need to go pointless at the final two events, with the second, third and fourth placed players filling up the top spots for him to miss out on a trip to London in December.

Woodward took top spot at Chinook Winds to leapfrog into second spot while Rodney Morris came home in fifth spot, earning enough points to keep in the top three. His lead is the slimmest of the slim as Mike Dechaine finished fourth at the Gotham City 9 Ball Classic the lie one point behind Morris in fourth spot.

Oscar Dominguez, Shaun Wilkie and Justin Bergman are still in with a shout but will need to finish high in Chesapeake at the US Open next week, and hope others falter. With Woodward, Bergman and Dominguez sitting out the season closing Kuwait 9 Ball Open, many of the questions may be answered in Virginia next week.

With 26 events played, there are just two to go – the US Open which gets underway on 16th October and the big money Kuwait 9 Ball Open which concludes on November 5th

The 2016 Mosconi Cup takes place at the Alexandra Palace in London from 6th to 9th December. Three of the five spots on Team USA will be allocated to the three highest placed players on the ranking list following the conclusion of the Kuwait Open in October. A full list of all ranked players is available at https://matchroompool.com/mosconi-cup/#teamUSA

The roster of events has been significantly expanded from 2015 and this year there are now a total of 28 events which carry Mosconi Cup points. These events have been grouped into three categories: Category One is major international events both in the USA and overseas; Category Two is events played on 9 foot tables in the US and Category Three is events taking place in the US played on 7 ft tables.

Tickets for the Mosconi Cup are available from www.matchroompool.com

Masters set for Gibraltar in February