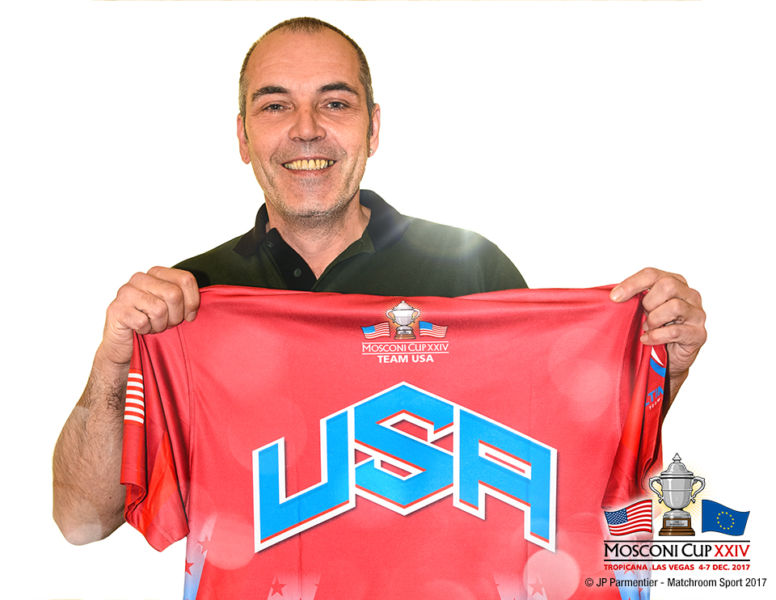 JOHAN RUIJSINK, the authoritative Dutchman who led the European side undefeated through seven Mosconi Cups, makes a return to the competition after a two year absence as he takes the reins of Team USA in an attempt to revive America’s flagging fortunes in the transatlantic team event.

Ruijsink last captained the European side at Blackpool in 2014 when they ran out comfortable 11-5 winners over the USA. He promptly announced his retirement from an event that he had come to over-shadow after turning Europe from regular losers into the dominant Mosconi Cup force.

Following three barren years with Mark Wilson at the helm, it was felt that the Dutchman’s fantastic experience and his progressive methods in producing winners were ideally suited to get America competitive again.

Commented Ruijsink, “The reason to take on the job is quite obvious; I am an authentic lover of the game and especially of the Mosconi Cup. In 25 years of coaching, the Mosconi has proven to be by far the most exciting event in the world of pool.

“When Europe was in trouble I thought that was unnecessary – one win in ten years – as I now feel it is not correct that the US is in trouble. Both sides have great players and the MC should bring this greatness out of every player competing.

“My entire coaching career has been founded on seeing the American players compete at the World Championship in Bergheim, Germany in 1990. There I saw Earl, Varner, Davenport, Mizerak, Mataya, Lebron and a young Johnny Archer and they made me love the game even more. It also ignited the wish to understand why and how they played at this incredible level, so from that time onwards I have been chasing for my players to perfect their performance.

“Now, 25 years later, it hurts to see these great players having trouble to show their high standard in the MC and it is a great honour to be given the opportunity to help them in doing just that.

“I sincerely hope that people will see me neither as an intruder (from the US side) nor a traitor (from the European side) and I hope the pool scene will understand that as a coach, there is no bigger challenge today and as a pool lover it is my greatest wish to see a competitive US squad at the Mosconi Cup. The players, audience and the pool world deserve just that,” he concluded.

Matchroom Sport Chairman Barry Hearn said, “It was a big decision to make in appointing a non-American to guide Team USA. However, in this day and age sport and success is an international business and there are plenty of precedents. For example, the USA men’s and ladies’ soccer teams both achieved great accomplishments managed by a German and a Swede respectively.

“Johan is passionate about pool and about creating winning mindsets for players. He leaves no stone unturned and I know he will be giving it everything he’s got between now and the evening of the 7th December when the outcome of the 24th annual Mosconi Cup is determined.

“Make no mistake, this is one tough job. The Americans have won just once in the past 11 years and there is plenty of work to be done, but I believe that if anyone can get the USA competitive again, Johan can.”

2017 MOSCONI CUP is sponsored by Rasson Billiards who supply the Official Table; the cloth is supplied by Iwan Simonis and the Official Balls are Super Aramith by Saluc. Predator is the Official Cue of the event and Ultimate Team Gear provide all Mosconi Cup apparel.