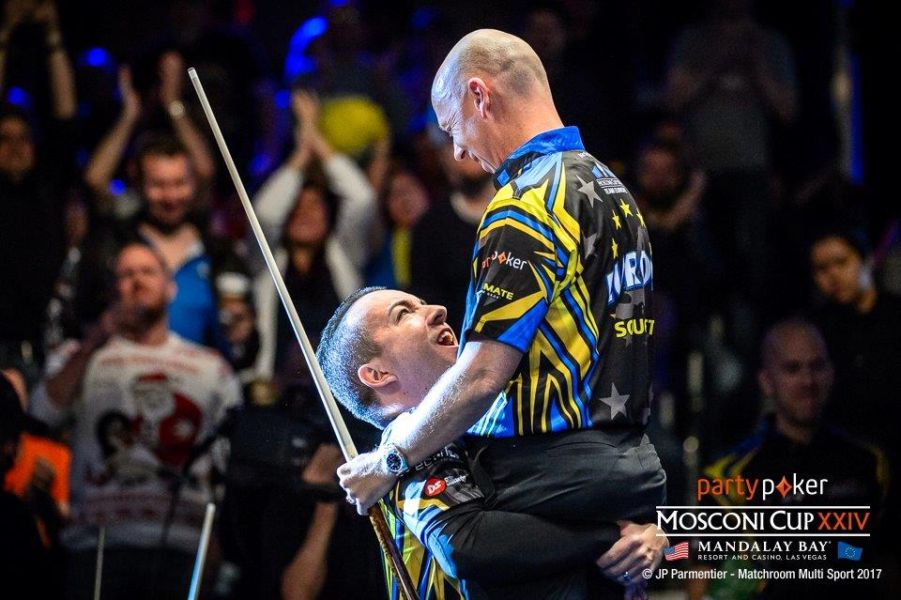 Europe one away from another victory

FOLLOWING A DAY of high tension, Europe are now just one win away from once again retaining the partypoker Mosconi Cup as they shared the session 2-2 with the Americans. That increased their lead to 10-4, with 11 points being the magic number.

In front of a passionate crowd at the Mandalay Bay, Europe needed three wins to seal victory but after taking a pasting over the first two days, the American squad came out fighting.

Firstly, the pairing of Hatch and Dominguez overcame all manner of nerves to edge past Ralf Souquet and Jayson Shaw and give the American fans a moment they had been waiting for.

In the next clash, Billy Thorpe, who has looked excellent in his Mosconi Cup debut, got the better of Nick van den Berg for take the score to 8-4 and give the crowd some hope. The nervy Dutchman missed the 7 ball with ball in hand and Thorpe took advantage. However, Van den Berg recovered well from his glaring error to take the match to hill-hill but the American prevailed.

The big USA surge of momentum came to an end in the next as David Alcaide and Ralf Souquet put on a superb show to beat Dominguez and Woodward, who has yet to win a point. That made it 9-4 and set the stage for the final match of the session – Jayson Shaw v Shane Van Boening. An American win would leave the overnight score at 9-5 and offer a glimmer of hope, while a win for Europe would effectively leave the Americans dead and buried.

Once again it came down to the final rack as both players struggled with the pressure and atmosphere. It was Van Boening who cracked, missing a simple 8 ball to hand the match to Shaw who celebrated wildly, aiming his joy at the American team.

“Unbelievable, what a match – when I was down 4-2 I tried to dig deep and take my chances,” said a delighted Shaw.

“I scratched on the first ball and Dennis Hatch is clapping, shouting good shot so that’s why I acted like that, to give it back to him.

“This is crazy, you can’t hold yourself together but I couldn’t believe he missed that ball. One more match tomorrow, and we’ve got it. It has been a big day, they took the first two games 5-4 so the last two matches were real big,” he added.

For European captain Marcus Chamat, the end is in sight after a strong showing this week, although like many others he was disbelieving of Van Boening’s error.

“Everybody is still shocked; how do you see that from a player of his calibre? This is what this tournament does to you. Any other tournament, it doesn’t happen.

“Between Shane and Jayson, they are under pressure. They are the top guns at the moment for both teams so it is pressure for them, but Jayson handled it better than Shane van Boening for sure.
“I had good faith in Ralf and David because they play in the same league in Germany and they are good friends. I was so confident in that team and they played brilliantly.

For American captain Johan Ruijsink, it was a different story, “We are 10-4 down. We made mistakes earlier in the Mosconi Cup but now everybody is in shock about a big mistake from Shane. It is a ball he would never miss again but that happens, even the best players in the world get the tension, something happens and they don’t make the ball.

“Tomorrow we will take it one by one and every match we survive we will be happy. I was proud of how the guys came out and fought and we won two hill-hill matches. Then Souquet played really good, really solid, and that was hard.

“In the end it was the second time Shane could have beaten the guy everybody considers to be the best in the world but it didn’t happen and it is 10-4.

“We have lost the Mosconi Cup already, obviously. We are absolutely not likely to win this one. It is like in basketball being 40 points behind and three minutes to play – it is impossible for everybody. However, we will play six singles tomorrow, six times an American guy against a European guy and if we show our A-game we can prolong it. We are very unlikely to win this one but we will try to win every single match from now on.”

US hopes in tatters as Europe’s hammer falls