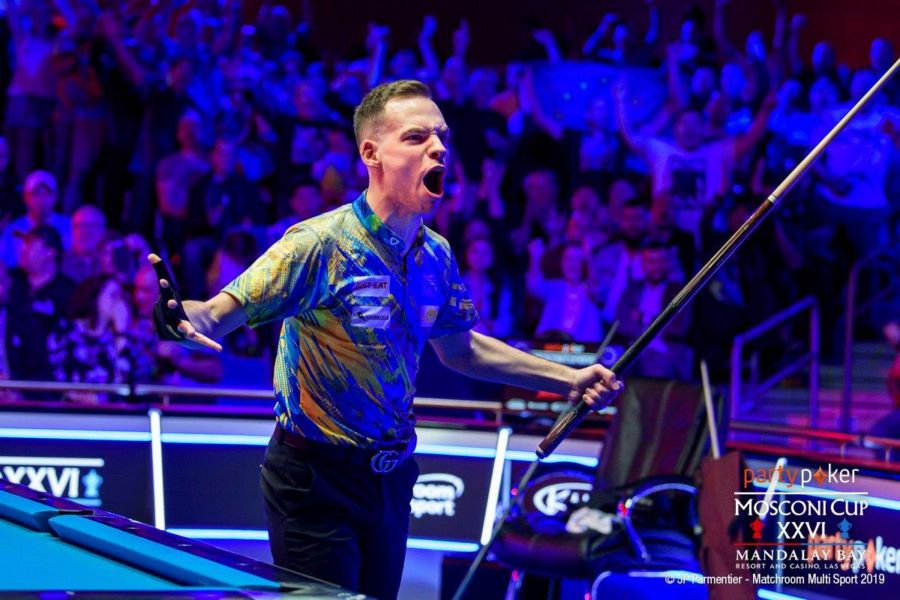 Team Europe overturned a 2-0 deficit with a string of dominant performances to lead Team USA 3-2 after the opening day of play in the partypoker Mosconi Cup at Mandalay Bay Resort and Casino Convention Center, live on Sky Sports and DAZN.

USA had won the team match and the first doubles as Shane van Boening and Tyler Styer beat Eklent Kaci and Niels Feijen. Joshua Filler fired back emphatically for Europe, beating Billy Thorpe 5-0 before Alex Kazakis and Jayson Shaw were 5-1 victors over Skyler Woodward and Justin Bergman. Shaw and Bergman remained at the table for a singles clash, in which the Scot ran out a 5-3 winner to give his side the lead.

Europe won the opening rack of the first match, but USA then took the next five for the point. Shaw, however, was unhappy in the fourth when he was convinced that Bergman had fouled the 9-ball when trying to escape a safety. The decision went to the video replay but no foul was called and 32-year-old Bergman, making his first partypoker Mosconi Cup appearance since 2016, took the rack for a 3-1 US lead. His Scottish opponent was left reeling at the call which meant he didn’t have the opportunity to level at 2-2.

The home lead was extended to 2-0 after Van Boening and Styer teamed up to defeated Feijen and Kaci 5-4. The first four racks went with the break until Styer missed a routine 4 in the fifth, allowing Europe to steal. Feijen, however, errored himself in the next and parity was restored when the US pair pounced after the Dutchman had hit the 1-ball thick, leaving it hanging over the pocket.

Both teams then took advantage of their next break for the first hill-hill match of the tournament. USA had won the lag but couldn’t make the 1. Feijen had a down table pot but missed, allowing Styer and Van Boening to clear and double USA’s advantage.

“I am happy to get the win there,” said Styer. “I missed a ball which isn’t acceptable at this level so they will be pretty hurt that we could still win a match like that. We want to win every match if possible. We have to make up for the years where we have lost.”

Europe may have been two down, but they had their trump card to play next. Since missing out on last year’s Mosconi Cup, 2017 MVP Joshua Filler has become World Champion, US Open Champion and the undisputed World No.1.

He was walking next, to face Thorpe, who won the lag but scratched on the break. That allowed the German to lead, an advantage which he doubled off his own break. Rack three saw Thorpe lose the cue ball on the break again and Filler wasted no time in making it 3-0.

It was soon 4-0 as Filler ran out his next rack. Breaking to stay in it, Thorpe avoided the scratch but his lack of table time was evident as he missed the 3. The European crowd finally found its voice, singing Filler’s name as he completed a 5-0 whitewash to get the visitors on the board.

The away side dominated the next match, too, as Shaw and Alexander Kazakis took a 5-1 win over Bergman and Woodward, setting it up for what was anticipated to be an epic closer between Bergman and Shaw.

The Scot took the lead after a Bergman scratch handed control to the European, and off his own break Shaw made it 2-0. The lead was extended further after a poorly executed jump by Bergman, and Shaw took advantage of his own break for a second time to make it 4-0.

Bergman was on the board when he broke and ran the fifth and he had the home support on their feat as he took the sixth to cut Shaw’s lead to 4-2. The Illinois man was breaking next and ran out to crank up the pressure on his opponent. But pressure wasn’t a factor for Shaw, who ran his rack to give Europe the overnight lead.

“I have felt good all day but the butterflies have been there so I had to try and keep myself calm and composed,” said Shaw. “We didn’t start off great and they played well in the first match and in the doubles.

“Going 2-0 down, Josh had to go out and perform and I knew I had to go out and perform in those last two matches. There was a lot of pressure there but we play all year for this. Even though we are nervous we still get down and knock the balls in. It is great in here. The fans are going crazy. It is good to have USA on one side and the European support on the other.”

Play continues at 11am PT on Tuesday with five more matches including the ‘Fans’ Choice’ match to open the day.