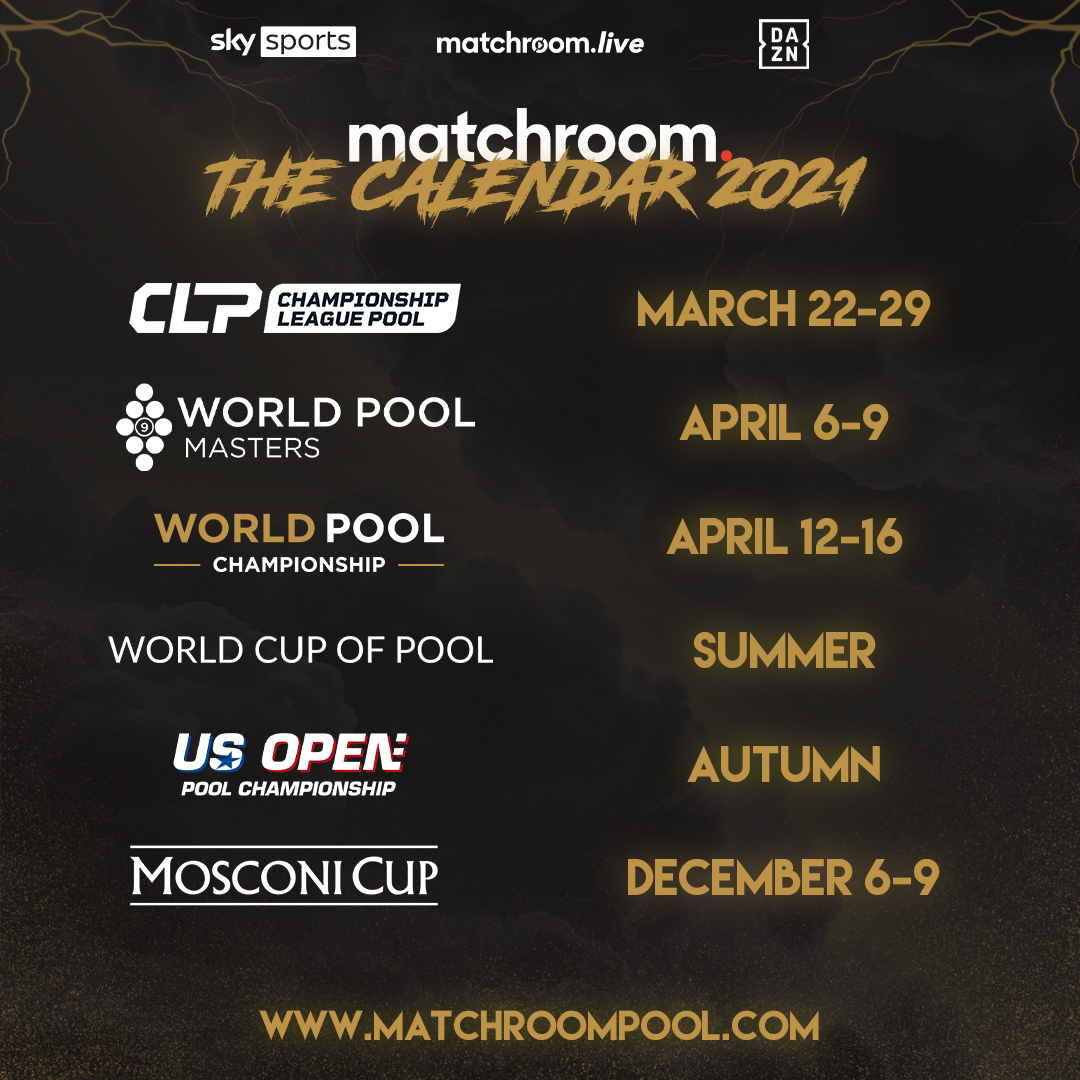 Matchroom Multi Sport is delighted to announce its biggest ever year of pool, with SIX events including the all-new Championship League Pool and the return of the World Pool Championship to the Matchroom stable.

After the global shutdown in 2020, Matchroom brought live pool back to the global TV stage with the Mosconi Cup in December and now launches a calendar of six major pool tournaments for 2021.

The 9-ball year will break off with the brand-new Championship League Pool, which will take place behind-closed-doors at Marshall Arena, Milton Keynes from March 22-29. Featuring 19 players and a prize fund of $85,950, Championship League Pool will be played across two tables with every match streamed live around the world. Full details of the new event will be announced later this week.

The World Cup of Pool will be the feature of the summer pool calendar, before the 44th US Open Pool Championship this autumn.

Then the year will close out with Europe as defending champions at the Mosconi Cup, set to take place from December 6-9.

Matchroom Pool’s World Rankings will resume with the World Pool Masters, while the US Open and World Championship will both be Tier 1 Ranking events. At the Mosconi Cup, Team USA and Team Europe will both feature the top players from the World Rankings, with entry to other events also awarded to the best players on the Rankings.

Emily Frazer, Managing Director of Matchroom Multi Sport, said: “Despite such challenging times faced for all over the past year and still experiencing now, we are more determined than ever to launch a calendar of events for pool, ensuring players have a schedule to follow, look forward to and practice for.

“With six events now in the Matchroom Pool stable and the launch of Championship League Pool we are poised to get the ball rolling come March 22nd.

“Ranking points are an integral part of our prestigious Mosconi Cup and we will be focusing on our Matchroom World Rankings, ensuring our six pool events unite and align, giving players the opportunity to be rewarded and earn their spots; an ongoing and work-in-progress.

“The climate is constantly changing but we are eager and passionate to deliver these events safely to players and hopefully spectators (when possible). With this proposed schedule of events we can reignite optimism and hope for all in the sport.”

To receive the latest news and ticket alerts for all Matchroom Pool events, sign up to the Matchroom Pool Club for free at https://matchroompool.com/pool-club/.