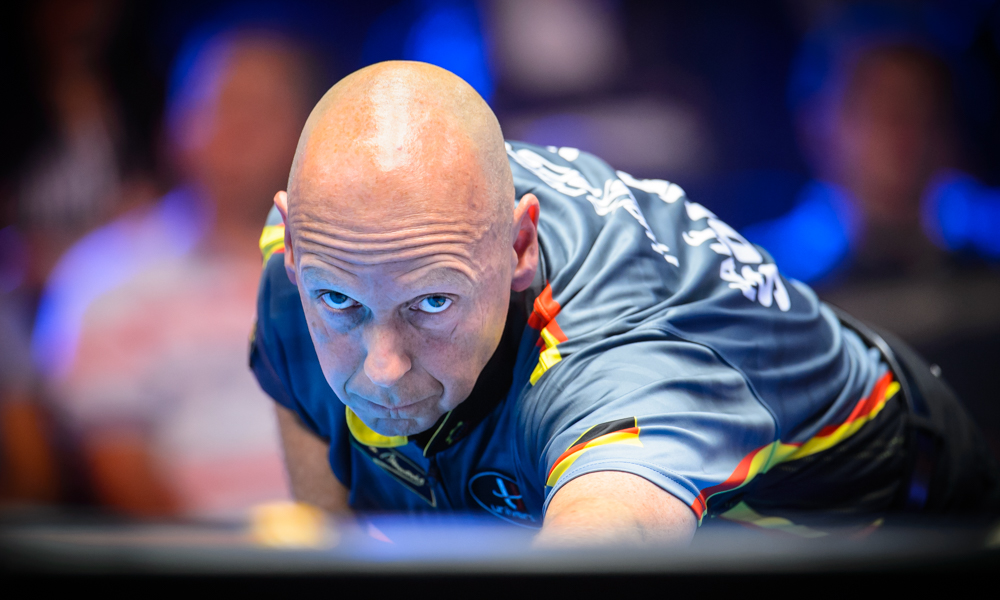 Liu through to semis as Souquet and Archer roll back years

Liu Haitao, the 33 year-old from Neimenggu, China became the first man through to the semi-finals of the PartyPoker World Pool Masters as he overcame Holland’s Niels Feijen in a hard fought match at the Victoria Warehouse.

Liu, the sharp-shooting World No.10, had a great start, aided by two misses by Feijen and it allowed him to take a 6-2 lead. Feijen though regrouped and won the next three to get within one rack of Liu.

Momentum was stalled though when he broke dry in rack 12 and Liu ran out to move to 7-5. Feijen won rack 13 to stay alive but a push out to a jump with no shot on the 1 ball let Liu regain momentum with a quality jump shot. From there he took the rack and the victory.

“I had the better luck in that match than Niels did,” said Liu.

“He made a simple mistake in the second rack and later in the eighth rack and they were key points. He made those mistakes and that put more pressure on him.

“I am very pleased with how I played tonight, and I had some good luck. I am excited to have made it to the semi-finals of the tournament. I have played two top-level players and I know tomorrow I will face another tough opponent whoever it will be as everybody in the tournament is a world-class player. I will have to keep my focus and play at my highest level if I am to win the World Pool Masters.”

For Feijen it was a disappointing evening; “I didn’t start so well. The crowd was completely different today, much quieter than last night. That had nothing to do with it but it made it a bit of a different setting.

“I missed an easy 7 in the second rack but I think the break was the major thing in the match. I was hitting it well but I got some bad runs. From 6-2 I clawed my way to 6-5, I had started to play pretty well but then on the next break everything landing in front of a hole but nothing went in.

“That made it an easy rack for him to get to 7-5. I got to 7-6, broke well again but was hooked on the 1. I couldn’t kick at it because there was a ball right there so it was too risky to go for it. I went for the push but he jumped a good karom on the 2. He missed the bank on the 1 but I was fully hooked again. I couldn’t do anything but kick and hope for luck. It didn’t happen and that was 8-6.

“Every time you go out it is disappointing but it is a bit more bitter because of the way it ended at 6-5. I was getting into it, breaking well, but it just wasn’t going for me tonight.”

There were two great wins for the two senior players in the tournament as Ralf Souquet and Johnny Archer rolled back the years to record dominating victories and make their respective ways into the last eight.

Souquet made light work of Nikos Ekonomopoulos to secure a quarter-final tie against Darren Appleton on Sunday afternoon. The 46 year-old modern legend was aiming to add to his record-breaking six Masters titles and looked his usual methodical self as he kept a tight control on the match throughout.

The Kaiser opened up a three rack lead at 4-1 and never looked back as he limited his opponent’s chances.

“The first match of a tournament is always tough, no matter who you play against,” said Souquet.

“I think I did quite well. I had a couple of mistakes off the break but I made some good kick shots, ran out when I had to and overall I am quite happy with my performance. I am playing well but there is always room for improvement. For a first round match that was pretty good, I am not too disappointed.

“I am playing a home country player next and that is never easy because the crowd is on his side. But on the other hand it might give me an extra kick, an extra percentage of concentration and focus, so I am looking forward to it but it isn’t going to be any easier than the first round match.”

Playing in the event after a late call up, Archer seized the opportunity against a man who had given Shane Van Boening plenty of trouble at last year’s event.

Like Appleton earlier today, Archer shot into a 4-0 lead and in the race-to-8, winner breaks format, it was a devastating start. The Scorpion looked very relaxed and was stroking freely as he ran through the racks.

There were a couple of blips – two missed 9 balls which would have given him an 8-0 victory – but overall it was an assured performance and Darren Appleton will have all he can handle in the quarter-finals.

Archer was expansive after the match; “Other than the two 9s that I missed I was pleased with how I played. The first was miss-able so that didn’t bother me too much but the second one I don’t know what happened.

“Other than that I played well, I made a lot of shots I haven’t been making lately so that was a nice confidence booster. The easy ones, I can live with those because I know I will make them next time. But the tough ones are the ones which if you are missing, your confidence goes because then you don’t want anything hard but I made some of those so my confidence is still good.

“A lot of people on Facebook have been sending me matches from the 90s when I won World titles, so I looked at myself and I am totally different now. Back then I was faster, the way I looked at the shots was different too. When I practice I have been looking at that and now the ball has started going in a lot cleaner. I realised my young self knew what he was doing.

“I have to work on my break a little bit so I will speak to Shane van Boening, who I have been listening to at the practice table, because he has it mastered. I know if I hit them a little bit better I can get a shot, so I need to tighten that up a little bit.

“I know playing Darren will be very hard, I know he will have a crowd behind him and that always brings good energy. I have to take care of what I do at the table and if I can get into some safety battles with him that will give me some confidence because I know I can win them. It will be very hard and he will be the favourite.

“It is important for me to play in the Mosconi Cup but my game had to get better from the last time I played. I didn’t deserve to play last year and I hadn’t played well the year before and I didn’t have a good year in 2014. I have spoken to Mark Wilson a lot this year and he has asked me if I will be practicing hard. I told him I will play more events and practice much harder. If I am a thought for a choice, I will let him know if I feel I can help the team. We will have to see because there are many other players out there playing well. If I am playing well I think I can help the team with my experience but if I am not on the team I will still be sitting there rooting for America.”

Pool’s biggest invitational event, the PartyPoker World Pool Masters features 16 top players from around the world competing for a $70,000 prize fund and the prestigious title. There is a high-quality stream available for $19.99 through www.matchroompool.com, reduced to $10.99 for the final day’s action.

Tickets are priced at £5 for Sunday afternoon, and £10 for Sunday evening sessions. To catch all the 9 ball action there is a great value season ticket taking in all sessions for just £30 available from the venue Box Office.

Down to the last four in Manchester