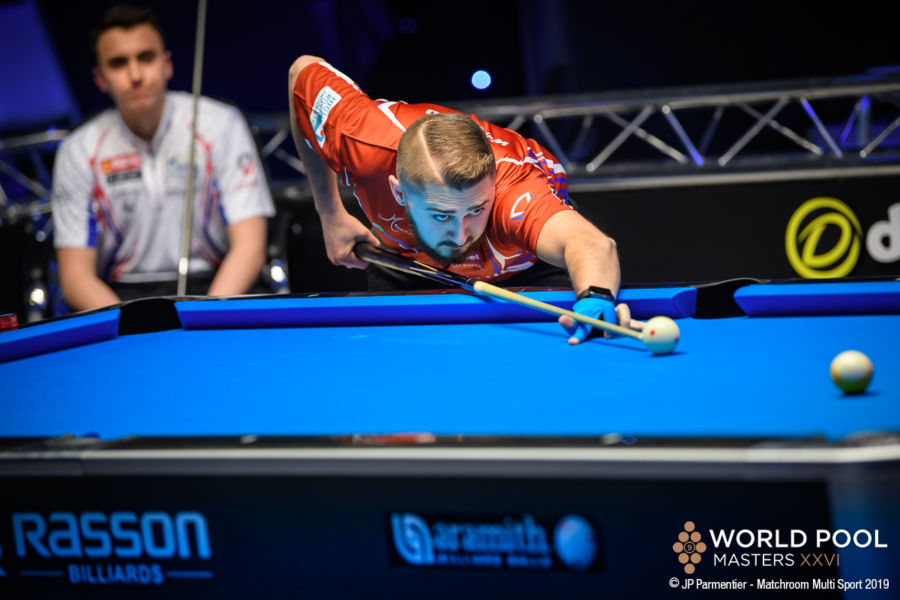 WE’RE DOWN TO the last eight of the 2019 Dafabet World Pool Masters as the final four first round matches played out at the Victoria Stadium in Gibraltar. The results seemed to favour the players who had won their prelim matches as only two of the eight seeded players won through.

In the first match, former World No.1 Eklent Kaci enjoyed an excellent 7-2 win over Jayson Shaw, aided by two outrageous flukes that won crucial racks. Both were almost identical as the Albanian had speculative attempts on a 2/9 combo and both saw the 9 miss at speed and move all the way up the table and drop into the opposite corner.

The first was in the opener and the second in the sixth rack and both proved big blows to Shaw whose table time throughout the match was limited.

The second match of the session was another that went all the way to a decider as New Zealander Matt Edwards overcame Poland’s European Champion Konrad Juszczyszyn.

The match was riddled with errors as both players missed countless pots but that only seemed to add to the entertainment. Juszczyszyn lead 6-3 and with the break seemed to have it in the bag.

With both players under par, Edwards got back to the table and clawed back two racks. At 6-6, he found himself breaking for the match but failed to down a ball.

The Pole scratched playing a safe on the one-ball to give Edwards ball in hand.
Under immense pressure, the New Zealander held his nerve to run the table and keep his Masters dream alive.

Edwards said; “A bit of luck went my way. It is a long way to come from New Zealand so I was due a bit of luck. Everyone here is a good player so I have to come out and try and play my game and see what happens.”
The penultimate match of the session saw two World 9 Ball Champions collide as reigning champion Joshua Filler squared off against Albin Ouschan, the 2016 winner.

It was nip and tuck all the way as both players performed well and it was a glaring error from Filler that decided the match. He lost his concentration momentarily trying to complete an elementary pot on the six-ball and it went awry, leaving it on for Ouschan.

The cool Austrian completed the run out to reach Sunday afternoon’s quarter-finals where he will face Skyler Woodward who defeated Fedor Gorst in the final match of the evening.

Woodward said, “We are good friends, when he comes to America we see each other quite a bit and he stays close to my hometown. I rested a lot and sat around, I didn’t practice a lot – I felt like I was never going to get to play but I finally got to play and I am happy to get through.”