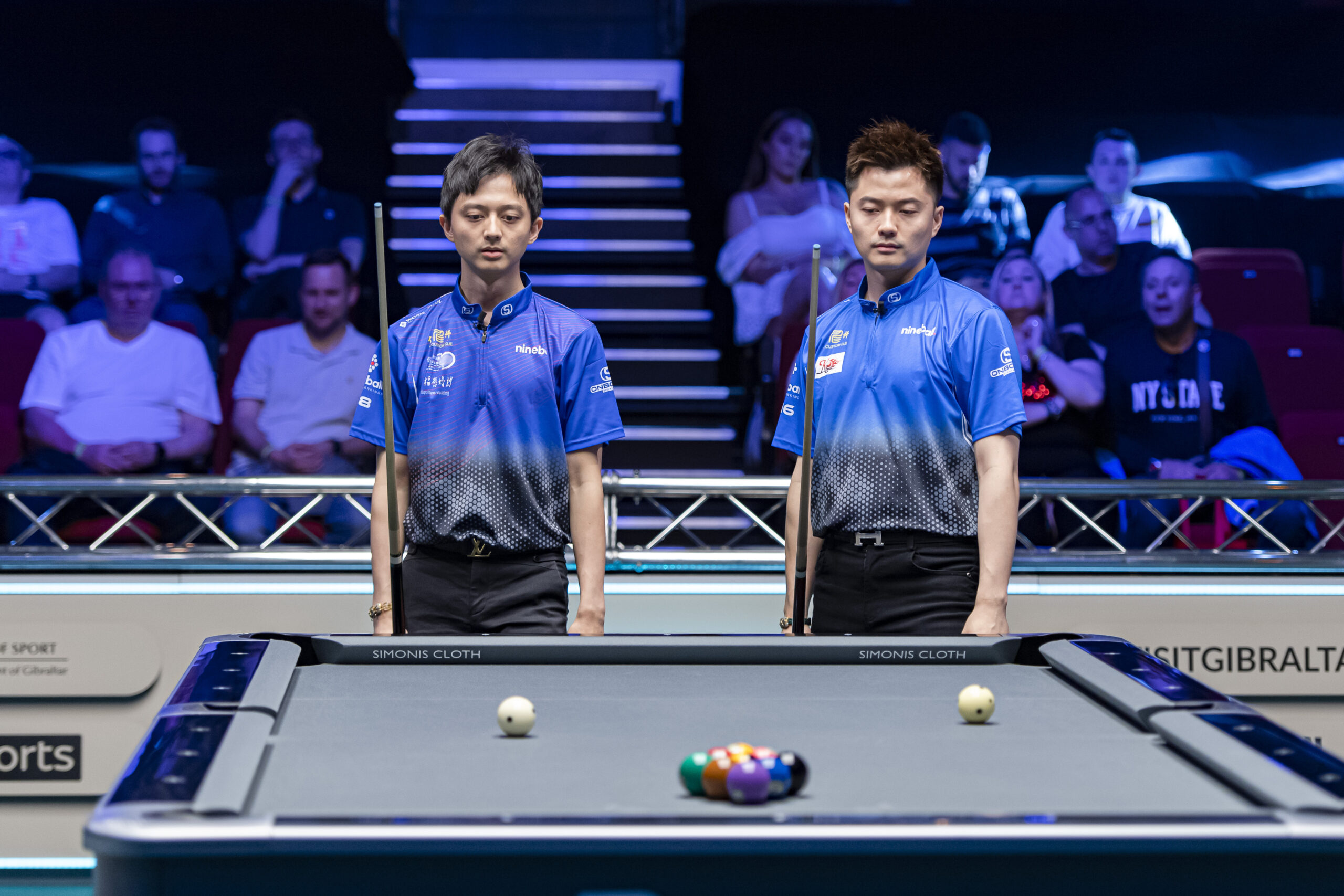 Ko Pin Yi knocked younger brother Ko Ping Chung out of the 2022 World Pool Masters at the Europa Point Sports Complex, Gibraltar live on Sky Sports, DAZN, Viaplay, and Matchroom.Live in selected countries as the Preliminary Stage was wrapped up.

Pin Yi and Ping Chung were obviously well-matched heading into their first competitive match against each other in a Matchroom event and fans were not disappointed as both oozed class on the table despite early tensions which saw both brothers make mistakes in the opening two racks to let the other in or one all. There is a six-year age gap between the two and it was Ping Chung who started to find a rhythm at 3-2 before an impressive jump shot on the one ball on the way to leading 4-2.

A costly mistake on the four by Ping Chung in the seventh rack did prove to be the turning point as Pin Yi soon pulled it to 4-4 with a break and run. Pin Yi, a previous World Champion is looking to add his first piece of Matchroom silverware to his extensive CV and he did his chances no harm as he set up a Last 16 tie with two-time winner David Alcaide in the Last 16.

Eklent Kaçi headed to Gibraltar on the back of reaching the semi-finals last year before a hill-hill defeat to eventual winner Alexander Kazakis but he knew he would need to beat previous winner Dennis Orcollo to stand any chance of getting near the semis this year. Kaçi got off to the best of starts taking the opening four racks with very little sweat but Orcollo was back in the Nineball arena for the first time since the 2021 US Open Pool Championship and he could’ve been forgiven for being caught cold at 4-0 down.

At this point though, Kaçi missed what seemed to be a simple cut on the one in the fifth rack but Ocollo then bounced back to win seven on the spin. Robocop lured Kaçi in and despite a few lapses of concentration it was as efficient as ever from Orcollo who sealed seven racks to seal a 7-4 win.

Abdullah Alyousef was making his World Pool Masters debut against Niels Feijen, a two-time winner in the penultimate match of the afternoon session and he produced one of the performances of his career to win 7-2. Feijen rattled the middle pocket on the five at 2-1 down to Alyousef and it set the tone for the remainder of the contest. At 4-1, Feijen made another costly error on the six ball as Alyousef went into dreamland at 5-1.

Feijen would’ve been hoping for more after his wild card invite but Alyousef proved his run to the World Pool Championship semi-finals was no fluke wrapping up a big win for the Kuwaiti cueist.

Francisco Sanchez Ruiz brought a crowd with him for his match-up with former World Champion Mika Immonen who had received a late call-up to the tournament. Immonen had the better of the opening exchanges to lead 4-2 but it was soon level at 4-4.

The downfall in that position came in the seventh rack when Immonen missed what seemed to be a simple cut on the eight ball. The pair were inseparable as it went 5-5 but that’s when the recent Derby City Classic 9-ball divison winner Sanchez Ruiz pulled through for a big win. The final dagger for Immonen coming in the winning rack for Sanchez Ruiz as he failed to make the two ball safe.

The Last 16 begins from 7 pm Central European Time with defending champion Kazakis set to meet Ocrollo in the opener before Max Lechner gets his campaign underway against Dimitri Jungo who overcome Mario He last night. The evening will be wrapped up by newly crowned World Champion Shane Van Boening vs Lo Ho Sum of Hong Kong, China.

VAN BOENING AND KAZAKIS OUT OF 2022 WORLD POOL MASTERS