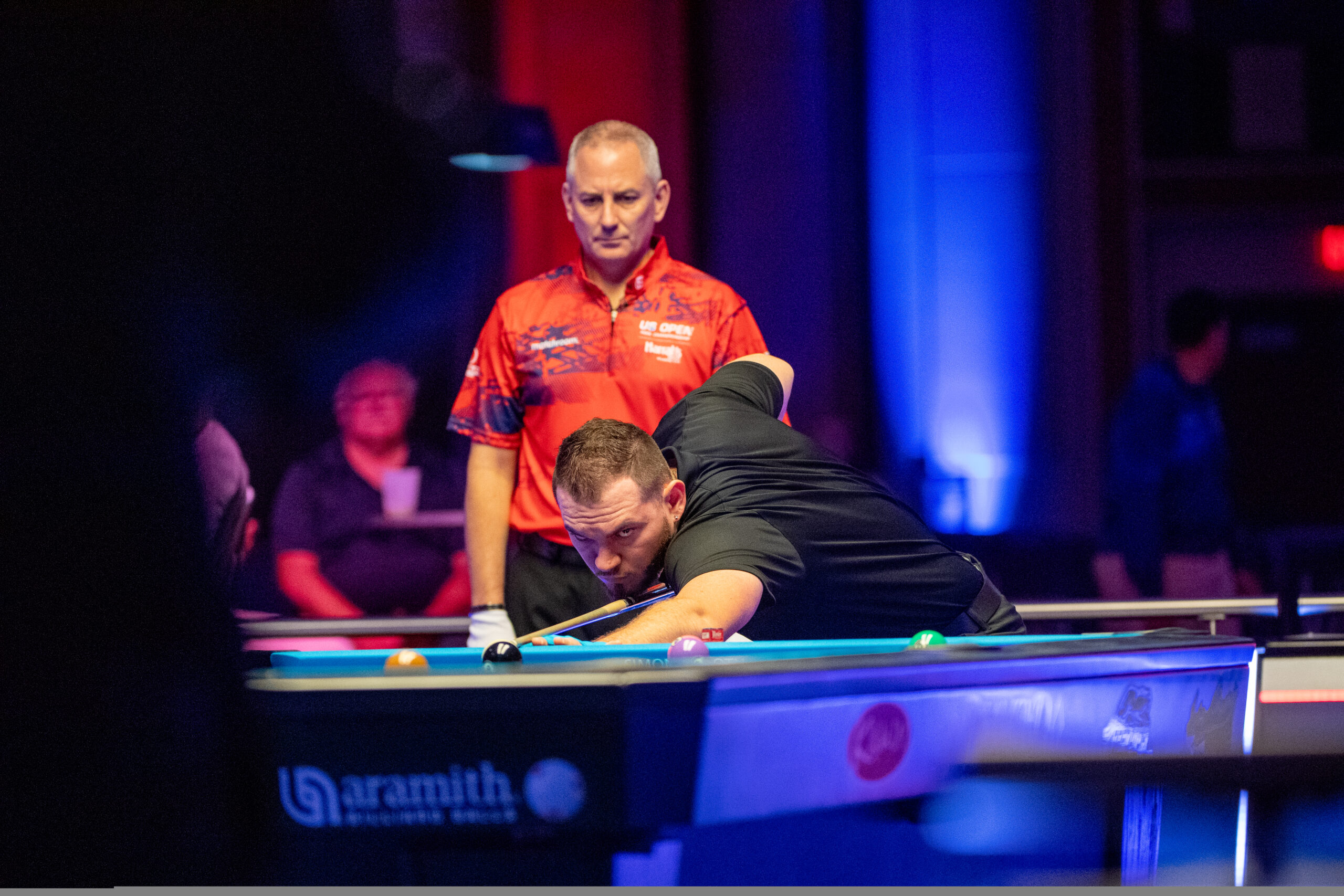 World Pool Masters champion Alex Kazakis, America’s Billy Thorpe, and Judd Trump were amongst the names to crash out on the US Open Pool Championship whilst Dennis Orcollo became one of the first names into the last 16 in the afternoon session on day four of action from Harrah’s Resort, Atlantic City.

Scores as it stands

Kazakis faced a gruelling battle in the losers section against Albin Ouschan to keep hopes of a second Matchroom Pool Series title alive but the Austrian proved too much as he went down 11-8 in a contest that showed the very best of 9-ball pool on the main TV table.

Ouschan will start the evening session against Chang Jung-Lin knowing he needs to win to keep up any chance of making the last 16 with the losers qualification round also looking over players tonight.

Aloysius Yapp became the first name into the last 16 in impressive fashion after a comprehensive over Dane hotshot Mickey Krause 11-3. Krause knows he will have to beat either Tomasz Kaplan or John Morra to make the last 16 later tonight whilst Yapp. Thorpe’s fate was decided by the same scoreline as 2019 World Cup of Pool winner Mario He dispatched him.

Jayson Shaw’s run on the winners’ side came to an end at the hands of Estonia’s Denis Grabe who put on a strong showing to clinch an 11-3 win meaning Shaw must go through losers qualification against the winner of Jeffrey De Luna and Carlo Biado later tonight. Shaw had set up his clash with Grabe after beating Trump last night. Trump’s first foray into 9-ball ended in dramatic fashion as South African Jason Theron beat him in a hill-hill finish.

This evening’s TV action sees Shane Van Boening against Francesco Sanchez Ruiz for a Last 16 spot whilst Joshua Filler and Skyler Woodward will do battle to avoid going home and a spot in losers qualification later on tonight. Table 2 is live on the Matchroom Pool YouTube with Jeffrey De Luna vs. Carlo Biado and Chang Jung-Lin vs Albin Ouschan. Filler beat Alan Rolon Rosado whilst Woodward came through eventually against Denmark’s Bahram Lotfy to the pair to meet later tonight.

The last 16 draw will be made at the conclusion of play today.

By the end of the day, only 16 players will remain. Fans can take in Table 1 live on the TV broadcast wherever you are in the world on DAZN in the USA, Canada, Brazil, Germany, Austria, Switzerland, Italy, Spain, and Sky Sports in the UK. Find out where you can watch the US Open Pool Championship in your country right here.