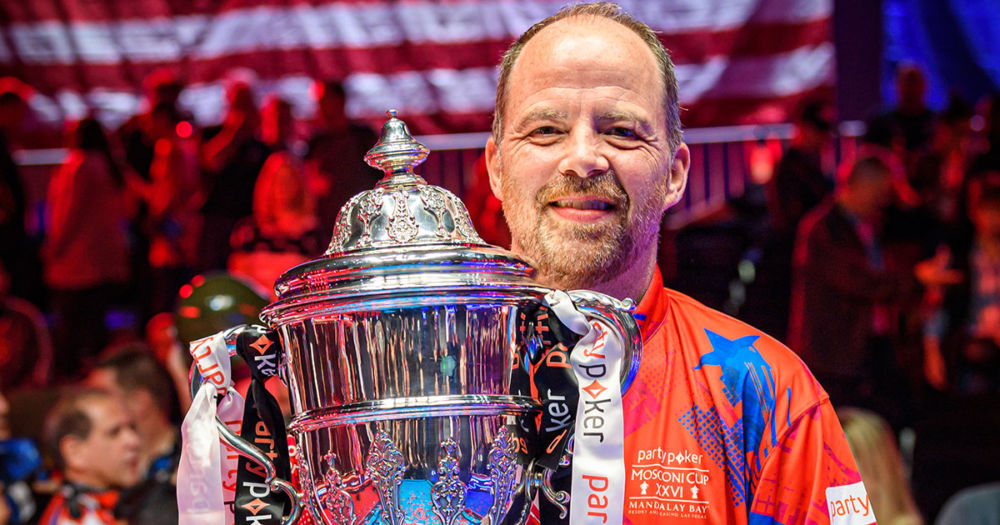 JONES: IT'S A PRIVILEGE TO REPRESENT THE USA

USA captain Jeremy Jones says it is a privilege to represent his country at the Mosconi Cup and has called on his team to be prepared for battle as they look to take the cup out of Europe’s hands at Alexandra Palace, December 7-10.

Jones will lead his side for a second time with the addition of Shane Van Boening as playing-Vice Captain as they look to replicate their last visit to Alexandra Palace in 2018 where they ran out 11-9 winners: “I always said from day one from being vice. I like going to London to try and get the cup. I like having as many fans as possible. That energy bodes well for us. On paper, we’re underdogs, right? You can set aside being a captain. But you must look at ways that are a little bit of an underdog win and variables are one of them. And anytime you throw those variables, especially the variables that I think our team thrives on. I will be honest; those London fans can be like Yankee fans. If you start to make an error here or there, they can turn on you quickly. I am not really relying on that but it’s a part of it.”

“It’s special, it’s almost so special in the moment you do not get to feel it. You do get to feel it though, there are let downs good and bad. It’s weird being a knowledgeable pool player and not being in the arena, you kind of notice everything going on. The awareness is amazing, maybe because you’re wanting to win so bad or you’re paying attention wanting to fight for your guys out there in the arena.”

Despite success in 2018 and 2019, last year proved to be a tough task for the USA as they lost out to Alex Lely’s European side 11-3 but Jones feels his side are in a much better place than where they were in 2020: “There’s a little more protocol with everything going on but the guys are in a good place. Last year we didn’t have any tournaments but this year we had two and a half months of maybe the best string of tournaments we’ve ever had in the USA as far as big events and great competition goes. That puts us in a good place. The one difference this year or maybe more of a focal point is being prepared as possible. That’s the main thing.”

“It’s a great mix. You have a couple of young guys like Tyler Styer who has experienced some great things in the Mosconi. I am glad he’s experienced some rough things as well I think that’s the way you get better. So, you don’t just look at those wins and think I have done it. I am not worried about Tyler, in that regard, he prepares a lot,” added Jones.

There have been several changes to Jones’ selection with a legend of the game Earl Strickland being handed a wild card pick along with the return of two-time winner Styer who last appeared in 2019: “We all know Shane and that Earl is his hero. All the other guys are so excited to play in a Mosconi Cup with Earl. I think it was a little bit of a shock to them and it as a lot of people, but they realise it’s about winning points. Shane and I are trying to do a lot of things for pool and we’re always here for the guys but when it comes down to our job description it’s about winning the cup and we feel Earl will earn us some points.”

The mood in the USA’s camp is buoyant with Jones managing more face to face contact with his players that is aiding his work to get his side in tune with the likes of Chris Reinhold and Skyler Woodward not too far away: “I will be able to get in front of Chris a lot. We’ve spent a couple of days already and Skyler isn’t too far. Shane and Earl have been in communication. Earl is practicing five or six hours a day. He won’t be lacking in endurance and being prepared. Tyler will be good. I messaged the guys this morning saying, ‘if you knew you were going to be in the finals of the biggest pool tournament in the world, how would you prepare?’ – and that’s basically where we are at. That’s a sweet privilege. I think if the guys get back to where we were back in the day where there were many guys fighting for those five spots, you release how much of a privilege it is to play in this. It’s not a right, you must earn it. You have to give it your all.”

Fans can buy their tickets now to see all four days of the action from only £30 per session.

“We all say that nobody wanted to win more than I did when I played…now as leader of this team, I want to be in that position to win as well.” – Jeremy Jones

JJ won the Mosconi Cup five times as a player and is aware of how much of a difference the format can make in a good or bad session and isn’t resting on his laurels when it comes to predicting how counterparts Lely and Karl Boyes will approach the week:  “We’re going to toy around with some combinations on stuff. I think Alex is very aware of what’s going on. He takes nothing for granted. Also, I think he will mix it up a little bit even though they won last year, and they won in a convenient manner you could say.”

“I think there were some close matches. I think he mixes up some of his doubles from last year I don’t think he relies on something that happened last year. I don’t think he’s one to give us on edge that something may happen. I can’t concern myself too much on their doubles going into day one. After we see day one, we get a little bit more information. After we see day two, we get a lot more information. You get a lot more of that about your opponent as you go on.”

“I have spoken to Alex several times over the last few months. I wish we were both playing. I love to feel that heat. It is much easier. I couldn’t pick a better five to sweat it, mind.”

Ticket prices start from £30.00 per session with a whole host of ticket options available including VIP and new for 2021, Platinum VIP+ where fans can get up close table side at Alexandra Palace and experience a backstage tour hosted by a Mosconi Cup legend.

Strickland: It should scare them. I don’t care what they think