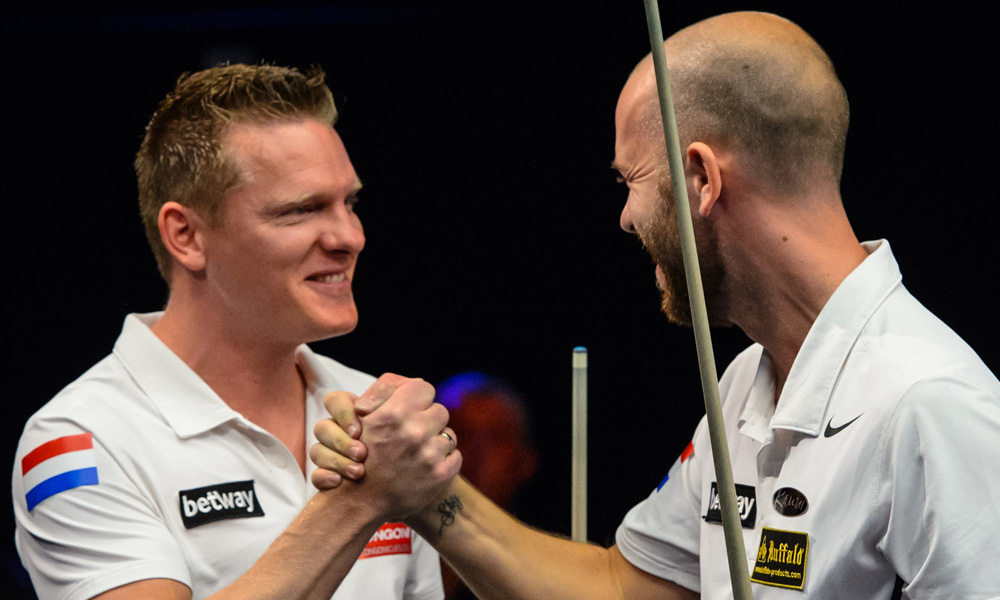 LAST YEAR’S runners-up Holland will get a shot at redemption on Sunday evening when they face England A in the final of the 2014 Betway World Cup of Pool at the Mountbatten Centre, Portsmouth after both teams came through their semi-final matches against European opposition.

Darren Appleton and Karl Boyes got the better of 2012 champions Finland – Mika Immonen and Petri Makkonen – who faltered after a good start. They lead 3-1 and 4-3 before England took the next three to lead 6-4.

Despite the Finns coming back at them, they never lost that lead and ran out comfortable 9-6 winners.

Commented Appleton, “It is a little bit of an advantage to be the home nation; a lot of guys have travelled from around the world but we just had to drive down the road. We feel comfortable here which helps and the crowd is on our side.

“That was our best match so far, we played pretty solid and we are really happy to get to the final. The levels here are high and Finland break so well; I have never seen anybody break so well as Petri Makkonen. You think they are capable of running the match out and it puts pressure on your break. “

Boyes added, “Our last match against USA helped because we were 7-2 up, had the lead, and they came back to 7-7 and we knocked two finishes in.

“We lost the lag today and could have been 3-0 down but Mika missed a shot and we hung in there, and then played really well.”

Holland, who came so close last year, get a golden chance to make amends after they trounced Austria who were the highest seeded team left in the tournament. Perennial duo Nick Van Den Berg and Niels Feijen were all business as they reeled off nine straight racks after losing the first.

“We are playing England in the final this year and that will be tougher [than Philippines last year] because they are at home,” said Van den Berg.

“Last year was our first final and for us it was a bit of a surprise to reach the final. This year we came as finalists, so it has been different for us.

“We ran four racks from 4-1 to 8-1, we didn’t run the last one because we had to play a safety but if you keep making balls on the break you have a really good chance.

“You always want to win the tournament but it is tough, there are so many great teams but it is so nice to be in the final again.”

Feijen said, “We have been there before so we know what to expect now. We will do what we have been doing, stay composed, we played a solid match in the semi-final so we will try to take that to the final and take off where we left.

“We broke well and got some open chances and we built momentum. The train started rolling and we were able to show our speed.”

Now in its ninth year, the Betway World Cup of Pool features 32 two-player teams from around the world battling it out for a $250,000 prize fund. The defending champions are the Philippines who will be among the favourites to claim a record-breaking fourth World Cup.

England steal it in final rack!