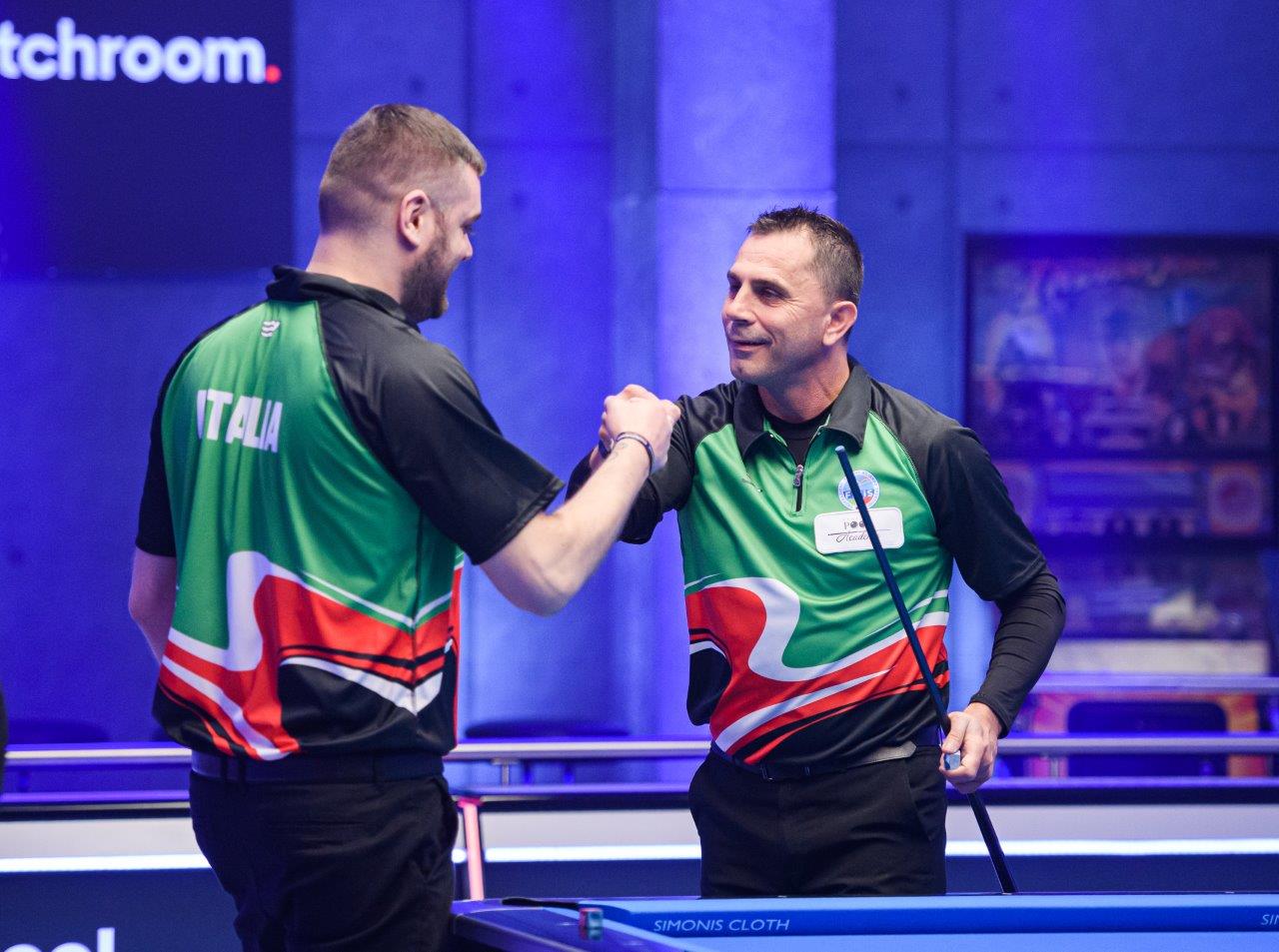 ITALY AND KUWAIT PROVIDE SHOCKS AT WORLD CUP OF POOL

Italy dumped World Cup of Pool third seeds Spain out in the first round of the event at Stadium MK, Milton Keynes, while there were wins on Monday evening for Germany, who survived a Lithuanian fightback, and Kuwait, who shocked Poland with a 7-3 victory.

Italy (Fabio Petroni and Daniele Corrieri) led for much of the evening’s first match against Francisco Sanchez-Ruiz and World Pool Masters champion David Alcaide and it was a Corrieri golden break that got them to 4-1. They moved to the hill with a healthy 6-2 lead, and it turned out that they would need it.

A mini fightback got Spain to 6-4, but Sanchez-Ruiz then missed a long 2 to the top pocket. Corrieri made the jump to remove the 2 but hooked himself on the 7. However, former Mosconi Cup player ‘Fabulous’ Fabio Petroni fluked the 3 and that opened the table for the underdogs, who cleared for the match to set up a second-round clash with Denmark on Wednesday.

The second match of the evening featured Germany’s US Open Champion Joshua Filler alongside new partner Christoph Reintjes. They were taking on World Cup rookies Lithuania, who were represented by two-time European under-23 champion Pijus Labutis and Kestutis Zadeikis.

After opening up a 5-1 lead, Germany were hit by a Lithuanian comeback, but the debutants stalled at 5-4 and from there the favourites were able to take advantage of a third dry break to close out the match 7-4.

“To play in the arena is always edgy in the first match but I really enjoyed it,” said Filler. “I missed a couple of shots but it happens but the main thing is to keep positive, and my partner played really well so I am delighted that we won.

“You should practice as a team to find your chemistry and rhythm and I think that is the key for every team. I was impressed with Lithuania. I saw them in the practice room and they played good and after 5-1 down they kept fighting.”

The evening concluded with another seeded team being eliminated. This time it was Poland who were on the wrong end of the result, with Kuwait’s Omar Al-Shaheen and Badar Abdullah Alawadhi impressing in a 7-3 victory.

The first round concludes on Tuesday with matches including appearances for all three Great Britain Teams. Kelly and Allison Fisher take on Philippines pairing Jeff De Luna and Roberto Gomez in the opening match at 12 noon (UK time). The evening session sees Jayson Shaw and Chris Melling against Belarus’ Margarita Fefilova and Yana Halliday after the return of 2014 winners Karl Boyes and Darren Appleton, they take on South Africa as late replacements for Canada. The evening session will begin at 5:30pm with USA against Australia.

Be on the screens at the World Cup of Pool!