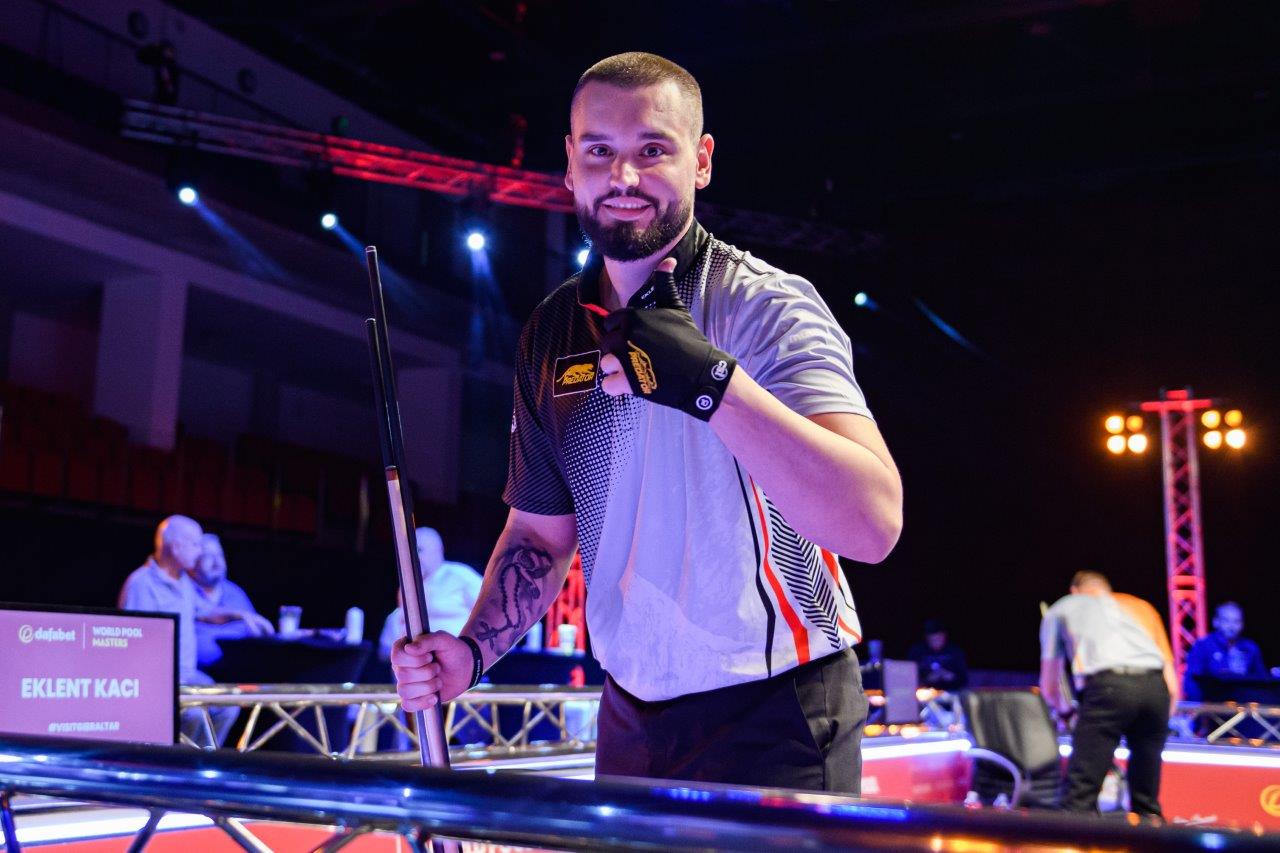 Niels Feijen was almost completely shut out as Eklent Kaci put in a commanding, confident performance to blast into the Dafabet World Pool Masters semi-finals with a 7-0 win over the Dutchman at Europa Sports Complex in Gibraltar.

Earlier in the evening Alexander Kazakis had beaten Australia’s Justin Sajich 7-3 and Shane van Boening had booked his place in the quarter-finals with a 7-1 win over Fedor Gorst. That had looked to be the performance of the night until the quarter-finals began with Kaci storming past Feijen, the man whom he pipped to Mosconi Cup selection last December.

The evening opened with the final two last 16 matches. Sajich was 3-1 ahead against Kazakis but he missed the 9 to go 4-1 up, and Kazakis stole the rack. From there, the Greek didn’t look back. Sajich was all-but locked out as the 2019 runner-up up booked his place in the quarter-finals with a 7-3 victory.

Kazakis will face Skyler Woodward in tomorrow afternoon’s quarter-finals in what will be a repeat of the 2019 semi-final which was won 8-1 by the Greek.

Woodward will be joined in the last-eight by Mosconi Cup team-mate Shane van Boening after the five-time US Open champion inflicting a 7-1 defeat on World Champion Fedor Gorst.

Van Boening played a brilliant match, denying his opponent too many opportunities, and will now face Masters debutant Max Lechner in the quarter-finals.

“I know how to win this tournament. I have to string three or four racks together and maybe I can win the tournament. Anything can happen in a short race.”

After Van Boening and Kazakis had impressed, Eklent Kaci didn’t want to be left out. Ina rguably the performance of the tournament so far, he broke and ran four of his seven racks, and missed just one ball during the match.

Feijen also missed one ball, but he wasn’t given the chance to miss any more as Kaci powered his way to the semi-finals with a performance that was near to perfection.

“I feel great,” said Kaci. “I played a nearly perfect set; he missed a ball in the first rack and that was it. Even as players, we enjoy when we play perfect sets, it is why we practice so hard.

“If I don’t think I can go all the way, I wouldn’t even come here. I am looking good, feeling good, playing good. If I can break them good and get some rolls, we will see tomorrow.”

Kaci will face the winner of the Woodward vs. Kazakis semi-final, which is the third of Tuesday afternoon’s session. Play begins with Joshua Filler vs. Denis Grabe and that is followed by Max Lechner vs. Shane van Boening.

Both semi-finals and the race-to-9 final will take place in the evening session from 6:30pm Gibraltarian time.

The Dafabet World Pool Masters is broadcast globally including on Sky Sports, DAZN and Zhibo.tv. Coverage is available on Matchroom.Live in nations without a TV broadcaster. Full details can be found at www.matchroompool.com.