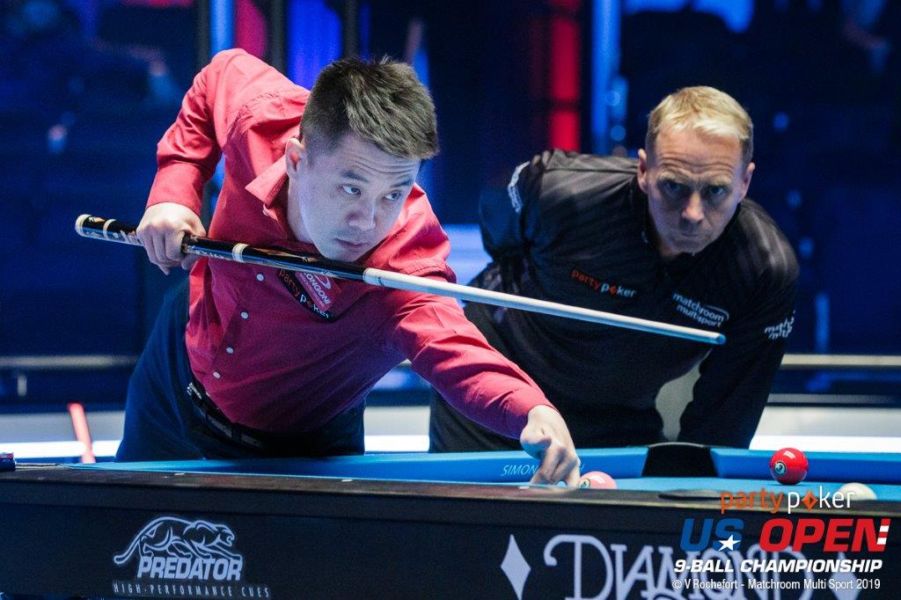 Liu Haitao battled from 6-1 and 9-6 down to beat Hsu Kai-Lun in the last-16 of the partypoker US Open 9-Ball Championship, while Chang Yu-Lung gave Jeffrey Ignacio little opportunity as he won 11-3 at the Mandalay Bay Resort and Casino Convention Center, Las Vegas, live on Sky Sports and DAZN.

Hsu Kai-Lu took a speedy 3-0 lead before Liu got on the board. Hsu extended his advantage to 6-1 before the first of his Chinese opponent’s fightbacks and then put together a second three-pack to take a commanding position at 9-6 up. However, Liu, a World Cup of Pool winner last summer took the next five racks to win the match and move into the quarter-finals.

Liu will meet Chang in the last eight after the Taiwanese player put in a performance of complete dominance – and a little luck – against Ignacio. The Filipino had barely had a shot at the table when he got a chance at 8-1 but soon after getting his second rack on the board control returned to Chang. In missing the 6, Chang fluked a carom on the 9 and had another slice of luck in the next rack as the cue somehow stayed in the jaw of the middle pocket when a scratch looked certain.

Ignacio returned to the table in game 13 and freewheeled his way to a third rack but the match was over minutes later as Chang completed an 11-3 win.

Earlier in the day Joshua Filler defeated defending champion Jayson Shaw with a breath-taking performance to set up a quarter-final tie with Francisco Sanchez Ruiz, who defeated Ko Ping-Chung. There were wins too for Jeffrey De Luna over Imran Majid and Alex Pagulayan in a true hill-hill thriller with Aloysuis Yapp.

The last 16 concludes on Thursday morning with Hsu Jui-An against Wang Can and Shane van Boening versus Wu Jiawing before the four quarter-finals take place in the Diamond Arena at Mandalay Bay. Live scores are available now at www.matchroompool.com.