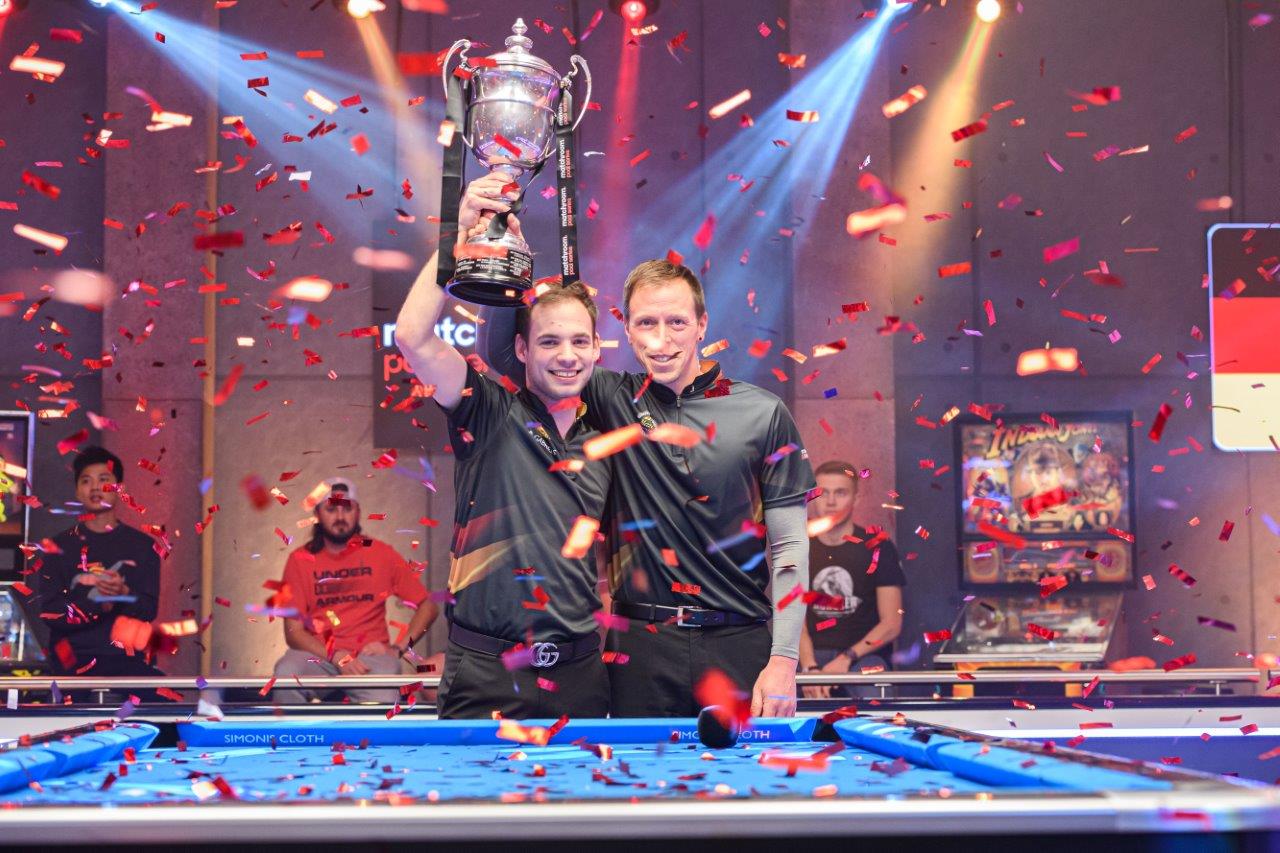 The pair rode their luck at times in the final and also took advantage of some missed opportunities by the Great Britain pair of Darren Appleton and Karl Boyes, who were looking to complete a fairytale comeback. The duo won the World Cup in 2014 and returned at the last minute as late substitutes to this year’s event.

Having crushed Netherlands in the quarter-finals and Slovakia in the semis, the British momentum came to and end at the hands of Germany, who last won the World Cup in 2011 when Ralf Souquet and Thorsten Hohmann took the trophy in Manilla.

“This final had so many ups and downs,” said Filler, who shares the $60,000 winner’s prize with Reintjes. “We both missed a 9-ball and made it and without these two 9-balls I don’t think we would have done the tournament because these two gentleman played so unbelievable throughout the tournament. They put it a great final and in the end we were the lucky guys.

“We fought every rack against Estonia and in the final; the break wasn’t really working but we fought to the end and we got the trophy, luckily. Without [my wife] Pia I wouldn’t win any tournament.”

Reintjes added: “I am over the moon. Today was our day; we can miss every ball and they go into the pocket.”

Germany drew first blood at the end of a nervy first rack which saw Reintjes miss the 3 before Appleton failed on the 4. The Yorkshireman showed his nerves early in the match; a missed 5 in the sixth rack was his third crucial mistake and it denied Great Britain the chance to level at 3-3, and gifted Germany a 4-2 advantage.

It was Boyes who missed the 4 in the next rack; leaving it in the jaws after Great Britain had taken advantage of a German pushout. Boyes’ 1 and Appleton’s 3 down the rail were good shots, but the missed 4 showed their fallibility. Germany came from their chairs to make it 5-2.

The hosts settled after that and took the next three racks to level. Germany regained the lead at 6-5 after Reintjes fluked the 2 to open the table. A Boyes 6/9 brought the 2014 champions level again but the Blackpool man missed the 7 and Germany led again at 7-6. They then benefit from two huge flukes; first Reintjes missed the 9 only to see it fly up table to the opposite corner pocket. He then made a 6/9 for his side to lead 9-6 before it was Filler who fluked a 9; he missed the bank to the middle but it found the opposite pocket to take Germany to the hill.

Great Britain took the next but Boyes had a tough shot on the 2 after their subsequent break. Boyes left it in the jaws and Filler kicked it in, opening the rack for Germany to clinch victory.

“I definitely feel like I am back to somewhere competing at the top level, so there are a lot of positives. Karl played amazing all week, probably the player of the tournament. I am so happy that I feel like I am back and compete again and I am looking forward to the future.”

Appleton will next be in action at the World Pool Championship from June 6-10, an event he won in 2012, and which Filler snapped off in 2018.

The next Matchroom Pool Series event is the World Pool Masters in Gibraltar from May 22-25, live on Sky Sports, DAZN and Matchroom.live. Full broadcast details can be found at matchroompool.com.

PREDATOR TO PROVIDE OFFICIAL TABLE OF THE WORLD POOL CHAMPIONSHIP