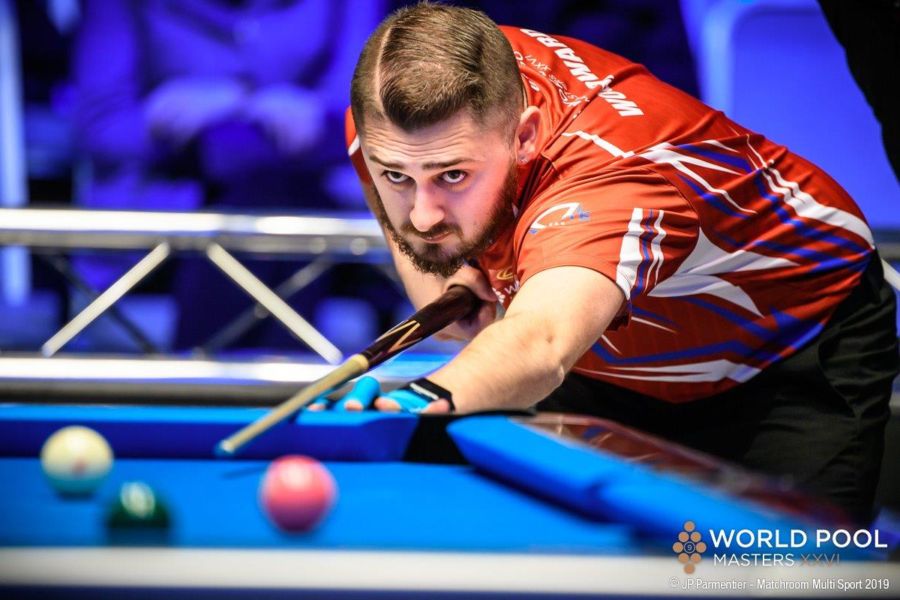 AFTER 20 MATCHES the 2019 Dafabet World Pool Masters is left with just four players and what an exciting semi-final line-up it promises to be three European stars and one American go for the most prestigious invitational title in world pool.

The Victoria Stadium in Gibraltar is the venue where David Alcaide, Klenti Kaci, Alexander Kazakis and Skyler Woodward will do battle for the $25,000 first prize.

David Alcaide kept on track for his second Masters title as he came from behind to take down David Alcaide with some outstanding play. The Spaniard trailed 3-0 as Van Boening’s break opened up the table each time.

A missed carom by the American allowed Alcaide back to the table and he took full advantage with some outstanding shot-making. Van Boening got to the table in what was the last rack but it was only to extricate himself from a safety.

With plenty of support in the arena Alcaide was delighted with the win; “When I play here and I have my fans, it is totally different. They give me a lot of power. I was three down but I never thought I would lose the match.”

The second match saw Klenti Kaci (Albania) take out an early 6-1 lead to make his semi-final appearance seem a formality before Alex Pagulayan mounted a stirring comeback to reduce the deficit to 6-5.

The comeback, however, was halted when an attempted bank on the 2-ball missed and allowed Kaci to the table to complete the run out for victory and a semi-final match-up against David Alcaide.

Alexander Kazakis made light work of New Zealand’s Matt Edwards to book his spot in the last four this evening. Edwards had worked wonders to get past Chris Melling and then European Champion Konrad Juszczyszyn but he came up short against current World No.2 Kazakis.

The Greek shooter looked comfortable throughout as his opponent struggled and, in the end, the score line of 7-1 told the story of the match.

The final quarter-final featured Albin Ouschan and Skyler Woodward in a clash of the Mosconi Cup MVPs. It was certainly a 50/50 match in advance but it was the American who took the plaudits with a confident performance to set up a clash with Kazakis.

Play continues on Sunday evening with the two semi-final matches followed by the final: