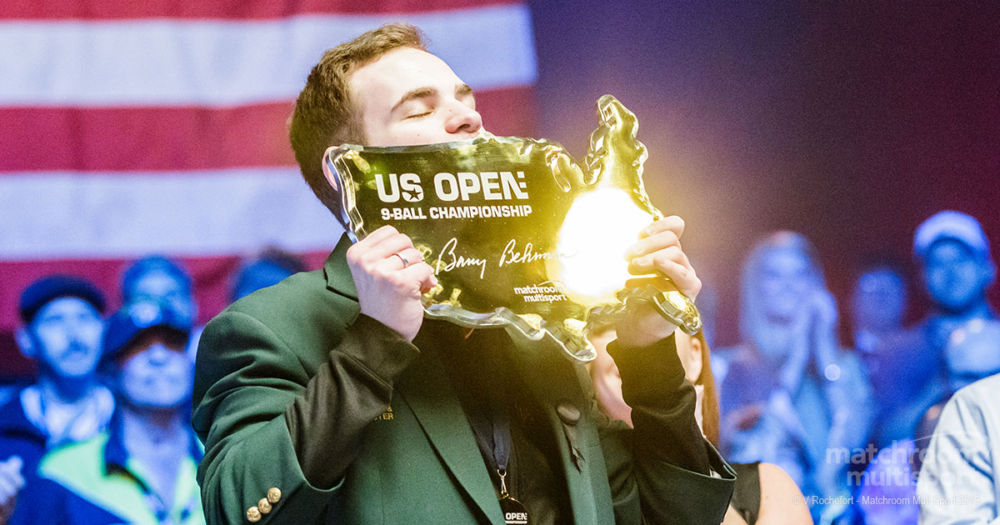 A host of former US Open 9-Ball Champions are among the first players to have entered the 2020 event, which will take place at Mandalay Bay Resort and Casino Convention Center from April 13-18.

Germany’s Joshua Filler will bid to become only the fifth player to successfully defend the prestigious title. The World No.1 was imperious as he won the Barry Behrman Trophy for the first time in Vegas in April and if he takes his 2019 form into 2020 will undoubtedly be one of the favourites again.

The $375,000 event offers free entry to all previous champions and American greats like Earl Strickland and Shane van Boening have already signed up. The pair share the record for having won five US Open 9-Ball titles and will be joined in Vegas by fellow American former champions Jeremy Jones, Corey Deuel, Gabe Owen and John Schmidt, who recently ran 626 balls to break Willie Mosconi’s 526 record.

Jayson Shaw lifted the trophy in 2017 and will look to win it back next year, while his fellow Brit Darren Appleton will be on the hunt for his third US Open 9-Ball success. Finland’s Mika Immonen completes the list of European former champions who will compete at Mandalay Bay Resort and Casino next April.

Alex Pagulayan reached the quarter-finals of this year’s US Open 9-Ball and will have his eyes set on another deep run in 2020, while Kevin Cheng has also confirmed his place as he hunts for a second title.

Player entries for the 2020 Open 9-Ball Championship are open now at www.matchroompool.com.

Player entry fees remain at $1,000 and former champions receive free entry to the event. After sold-out crowds, record TV ratings and a full field of 256 players for the 2019 US Open 9-Ball Championship, players are encouraged to enter the 2020 Championship early to avoid disappointment.

Prize money payouts will start from 97th place, with players reaching this stage receiving $1,000. Those who successfully progress from the double elimination stage will earn at least $5,000 with quarter-finalists taking home $7,750, semi-finalists earning $15,000 and the runner-up to be paid $30,000.
Spectator tickets for the 2020 US Open 9-Ball Championship will go on sale on Friday, September 13th with full details including pricing to be announced shortly.