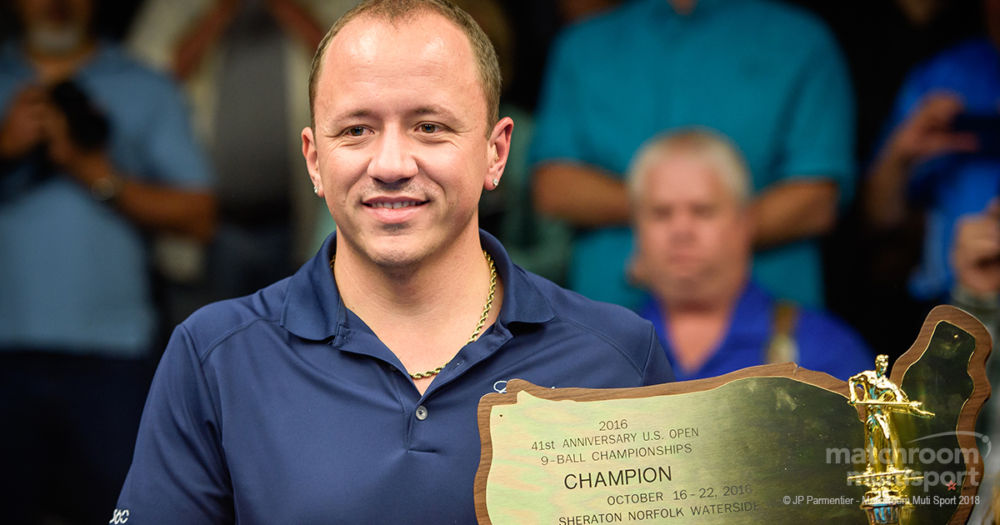 Five-time Champ Van Boening Chasing US Open No.6 In Vegas

Van Boening first won the US Open 9-Ball Championship in 2007 and had a run of three straight wins from 2012 t 2014 before equaling Earl Strickland’s record five US Open triumphs in 2016.

The ‘South Dakota Kid’ has confirmed his participation in next spring’s 43rd Open and is excited to see how the tournament develops under stewardship of Mosconi Cup promoters Matchroom Multi Sport.

“I think Matchroom taking over the US Open is the best thing that has happened in pool since the IPT,” said Van Boening. “I’m looking forward to it, to see what they are capable of doing. I’m excited about it, it’s going to be a great event.

“When I won the US Open [for the first time] in 2007 that was probably my biggest accomplishment I’ve ever had, and one of the toughest tournaments I’ve ever played in, especially playing Ronnie Alcano in the final – he was the number one guy and I was just a rookie coming up. Now after winning five, I still can’t believe it, it’s always going to be the toughest tournament in the world for me.

Players can register their entry from 1pm Eastern/10am PT on Monday 4th June at www.matchroompool.com/usopen9ball/. Players can pay the $1,000 entry fee in full or opt to pay a $250 deposit to secure their spot with the remaining $750 to be paid prior to February 1st 2019.

The tournament will be split into two stages with the full field playing double elimination down to the final 16 from Sunday April 21st until Tuesday April 23rd across multiple tables. From Wednesday April 24th until Friday April 26th the final 16 players will play straight knockout in the TV Arena in front of a global television audience.
The prize fund for the 43rd US Open 9-Ball Championship is set at a minimum $300,000.