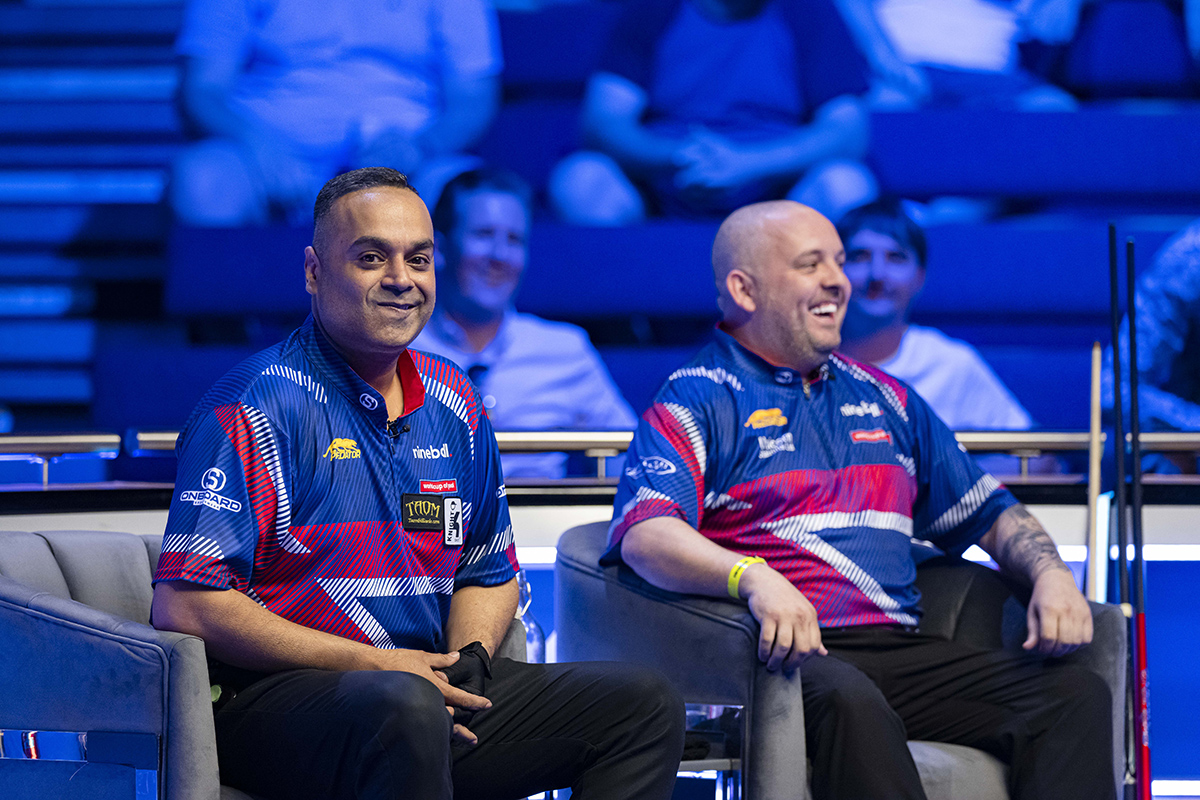 Finland, Switzerland, and Great Britain have completed the quarterfinal line-up at the 2022 World Cup of Pool at the Brentwood Centre, Essex live on Sky Sports Arena in the UK, DAZN in the USA, Canada, Spain, Italy, Germany, Switzerland, Austria, and Viaplay in Scandinavia, the Baltics, Netherlands, and Poland. Matchroom.Live in territories without a broadcaster.

Seeded Estonia came up against Finland with the winner set to face Singapore in the quarterfinals tomorrow morning. Estonia’s Denis Grabe and Rainer Laar struggled early on as Finland’s duo of Mika Immonen assembled a 2-0 lead that could’ve been three if it wasn’t for a poor safety from Immonen that allowed their opposition in to make it 2-1.

Estonia continued to struggle as Immonen and Uski gathered momentum to take the first rack after the break to lead 3-1 and soon 4-1. Grabe and Laar had their work cut out but came back in it sharpish no part down to an error on positioning on the nine in the sixth rack from Immonen to allow the Estonians to steal the rack and get the break in their hand.

At 4-2, Finland had their opportunity to move two away when back at the table only for Uski to miss the eight ball and leave Estonia again with a simple out to only trail by one. The key phrase of cue ball control was key in this contest, and it lacked at times from both sides. A routine break and run from Grabe and Laar levelled matters at 4-4.

Laar broke in the ninth, but he was warned for a soft break in the process, with the two hooked, Grabe called the push out and Immonen played a quality kick to leave Estonia punished for their push out call. It was Laar who was then up and he fouled to give Finland ball in hand and they made them pay to lead again at 5-4. Neither Grabe or Laar covered themselves in too much glory but the latter missed what proved to be a pivotal four in the 10th rack to allow Finland their moment to get on the hill. Uski cueing with the confidence of someone who was enjoying every moment on the big stage.

It looked like Finland would close things out in the following rack, but Immonen missed the six to give Estonia a glimmer of hope, and all be it a glimmer with the six now at the opposite end of the table and cue ball in front of the seven at the opposite end. Grabe pulled off the pressure pot but left Laar with a tester on the seven which he couldn’t make only for Uski to scratch when trying to bank the seven the full length of the table. Estonia was still alive.

The last rack wasn’t without drama, a costly miss from Laar handed Finland the opportunity to complete their win and face Singapore in the quarterfinals.

Hungary were next up taking on a Switzerland side who had barely missed a ball in their win over Japan yesterday evening. Oliver Szolnoki and Vilmos Foldes were keen to reach the quarter finals for only a second time in their nation’s World Cup history whilst Switzerland could be counted of something of a dark horse.

It was the case of two missed pots for Switzerland in the opening rack though as the costly one on the nine from Ronald Regli handed Hungary the opening advantage. A break and run completed by Foldes gave the seeded side the upper hand put them 2-0 up. Rack three was more of the same as Hungary put their stamp on proceedings.

Switzerland got their chance after the commercials after Hungary scratched on the break. From there, Dimitri Jungo went in off the nine when playing the six and it was 4-0 Hungary. Another break and run left Switzerland reeling and Hungary two away from victory and one eye on the quarterfinals.

Szolnoki broke dry in the sixth rack and it gave Jungo and Regli their moment to reduce the scoreline to 5-1, there was still plenty of work to be done if they were to have any slight chance of progressing.

The seventh rack was scrappy as the Swiss looked to build a pack, but it wasn’t going to be easy. Hungary got back to the table and Szolnoki put the eight away but left Foldes with a tricky attempt on the nine. One miss on the nine later and Jungo made it to cut their opponent’s advantage to three. Jungo and Regli pieced together a break and run in the next rack to do the damage with Regli making five balls on the break to help them along their way.

Switzerland’s idea of running a few packs came true with another break and run to make it 5-4 in the ninth. The almighty comeback gathered ahead of steam with a golden break from Regli to go level. Szolnoki had a chance to stop the drought, but he missed the three when cueing over the seven. Jungo and Regli did the rest to lead for the first time and be on the hill.

Hungary was presented a golden chance early on in what was ultimately the last rack after Jungo miscued when playing the one. Szolnonki potted the one but left Foldes short of a clear pot for the two. Foldes got fortunate and left Switzerland hooked but Regli did the exact same back to leave Szolnoki in a difficult position. One foul later and Switzerland completed a huge comeback to reach the quarterfinals.

Great Britain was imperious in knocking out their fellow countrymen in the opening round and Chris Melling with Imran Majid were looking for more of the same as they come against South Africa’s Jason Theron and Kyle Akaloo. Theron won the lag, but it was GB who took the opening two racks, a golden break from Melling in the second to take the early initiative. Theron and Akaloo stole the third rack to be trailing by one at the break and stop Great Britain winning ten racks in a row overall in the tournament.

With Great Britain leading 4-1, South Africa needed something, they were chasing the nine combo early on but left the same chance for their opponents. Melling missed the 5-9 combo but hooked Akaloo in the process. Akaloo fouled but then Majid scratched with the ball in hand. South Africa did the rest, and it was 4-2.

At 4-2, Melling missed the bank on the six ball and South Africa were able to close GB’s lead to just one in a tricky rack for both sides.

Great Britain didn’t hang around much after South Africa’s third rack with a quick run out in the eighth before making the most of an error-prone ninth rack from their opposition. Melling missed the two and left it over the pocket for Akaloo to make it only for the debutant to leave the cue ball slap bang behind the three. Theron’s effort saw the three-land plumb over the pocket at the opposite end to Great Britain’s rejoice who profiteered to be one away.

Theron has South Africa’s last say on the match. Majid broke dry in the final rack but Theron had no shot on the one. He fouled when trying to jump and from then on, Melling and Majid did the rest to meet Spain in the quarterfinals tomorrow evening.