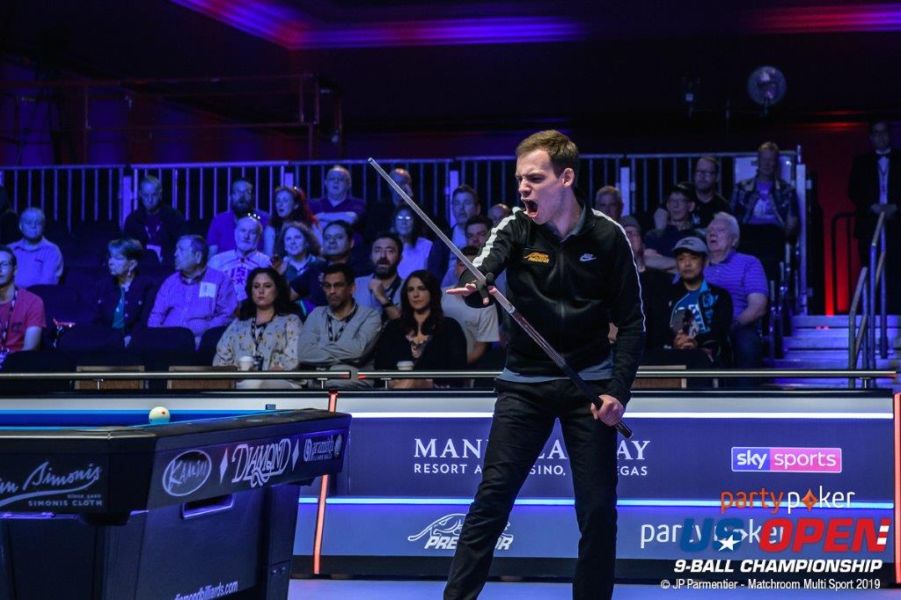 Jayson Shaw’s partypoker US Open 9-Ball Championship defence is over after he was defeated 11-4 by World Champion Joshua Filler at the Mandalay Bay Resort and Casino Convention Center, Las Vegas on Wednesday, live on Sky Sports and DAZN.

Filler will now play Francisco Sanchez-Ruiz in the quarter-finals after the Spaniard beat Ko Ping-Chung 11-4 in the morning session’s second last-16 fixture.

Having lost to Hsu Kai-Lun on Monday evening ‘Killer’ Filler had to battle through four losers’-round matches on Tuesday to reach the single elimination stage but showed no signs of fatigue as he won ten consecutive racks to overturn an early 3-0 deficit against Shaw.

The Scot gave himself a glimmer of hope by taking the 14th game but Filler was soon back at the table and his outstanding form was evident again as he made the final 9 in style to move into the quarter-finals.

“To play the defending champion, I was quite nervous,” said Filler. “I got a good break and that gave me a lot of confidence. It was a 50/50 match; we have both been champions of big events so it could have gone either way.

“I have had some tough matches already; I had to beat Alex Kazakis, Albin Ouschan who are two of the hottest players in the world. I won the World Championships in December but this is the toughest tournament I have ever played, it is unbelievable.”

Filler will now play Sanchez-Ruiz on Thursday after the Spaniard put in a confident performance against Ko Ping-Chung. Having already knocked out Ping-Chung’s brother Ko Pin-Yi in the winners’ qualification match yesterday, Sanchez-Ruiz built an early 6-1 lead. Ko fought back to within two but struggled to find his rhythm and his opponent was soon back at the table and raced to a comfortable 11-4 victory.

“I played so well in the match and was really happy with my play,” said Sanchez-Ruiz. “I played against both players and played well so I am really happy. They are both top players in the world so they were difficult matches. The quarter-final will be a tough match. Filler is World Champion but I am focussed on my game and I believe in my game, so we will see what happens.”

Play continues with four more last-16 matches schedule for Wednesday. All matches at the partypoker US Open 9-Ball Championship are race to 11, winner breaks, except the final which is race to 13. Live scores are available now at www.matchroompool.com.