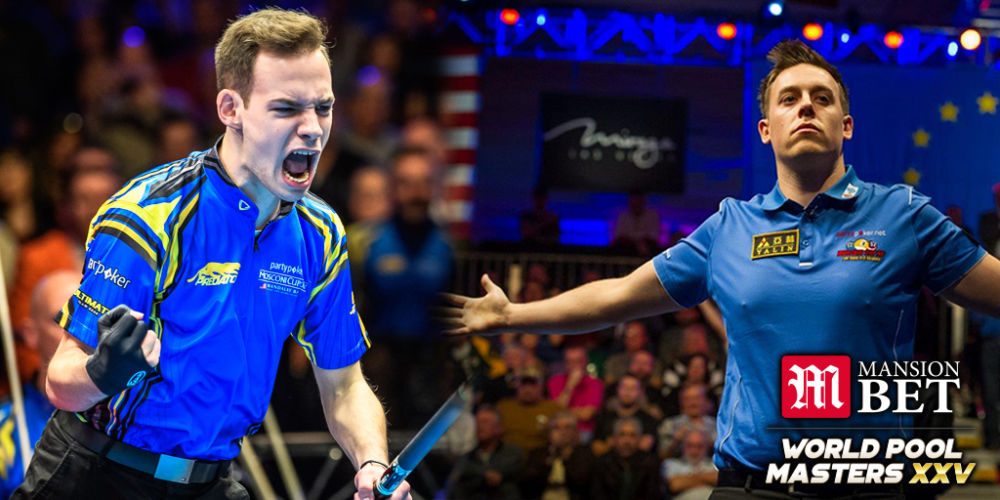 Joshua Filler and Karl Boyes have joined the line-up for this weekend’s MansionBet World Pool Masters in Gibraltar after Francisco Bustamante and Tony Drago were forced to withdraw.

Filler propelled himself onto the global scene last summer when he won the WPA China Open, which helped him qualify for December’s Mosconi Cup. He then thrived on pool’s biggest stage in Las Vegas, claiming the MVP award while European fans found a new fan favourite as their side defeated USA 11-4.

One of England’s most successful players, Boyes has always excelled at the top level. WPA World 8-Ball champion in 2010, he lifted the World Cup of Pool alongside Darren Appleton in 2014, was runner-up at the US Open in 2015 and has won the Mosconi Cup four times.

Boyes will face defending Masters champion David Alcaide in the first round on Friday evening after Drago was forced to pull out through illness. Filler will come up against Jayson Shaw on Saturday evening with visa issues denying Bustamante the chance to participate.

“It’s great to be back at the World Pool Masters,” said ‘Box Office’ Boyes. “I didn’t play a lot last year but I’m back now and feeling good after winning on the GB 9-Ball Tour last week.

“The Masters is a great event with only the best players in the world. The Matchroom tournaments are always the ones you want to play in so I’m pleased to get the invite and can’t wait to get into that arena on Friday night. There are some great players in the field but I’d love to come up against Earl Strickland again – we always have great battles and I’ve got a good record against him.

“I’ve won the Mosconi Cup, and I’ve won the World Cup. Not many players achieve the Matchroom Triple Crown and I’d love to complete that set by lifting the Masters trophy in Gibraltar.”

Filler added: “I‘m so excited to play my very first World Pool Masters. I‘m honoured to be one of 16 players and all legends. I had a lot of practice the last weeks and I just feel great and confident. I am really looking forward to this great event.

“The Mosconi Cup last December gave me some good experience in tournaments like this and I will try to play my best. It’s an unbelievable feeling to play at the Mosconi Cup and I‘m looking forward to playing the MansionBet World Pool Masters.”

The tournament will be broadcast live throughout on Sky Sports in the UK and on networks worldwide, with a Facebook Live stream available in countries where there is no TV broadcaster showing the event. For more details please see here:   https://matchroompool.com/world-pool-masters/#watchlive

The World Pool Masters will be broadcast live for 20 hours in total on Sky Sports in the UK and on networks around the world. The MansionBet World Pool Masters is also sponsored by the following suppliers: RASSON (tables), IWAN SIMONIS (Simonis cloth), SALUC (Aramith balls), PREDATOR (cues) and ULTIMATE TEAM GEAR (clothing).