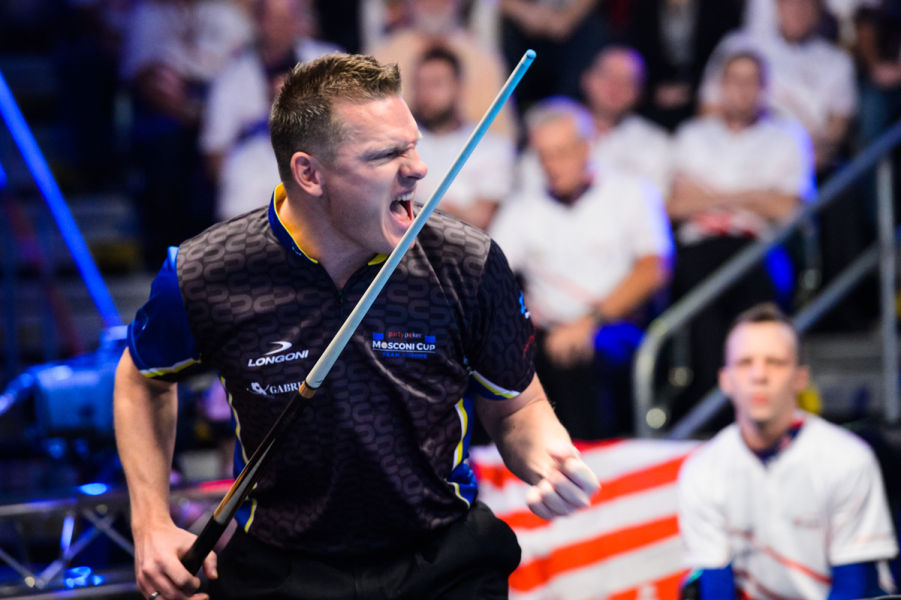 HOLLAND’S NIELS FEIJEN is the first man to gain a spot on Team Europe as they look ahead to defending the Mosconi Cup at London’s Alexandra Palace from Tuesday to Friday 6th- 9th December. Feijen, 39, will be making his 12th appearance in the storied event which will put him third on the European all-time list and move him to fifth on the overall roster of total appearances.

The Dutchman sealed the deal on home territory as he won the EuroTour Dutch Open at Leende at the weekend. He held off Mark Gray and Jayson Shaw to finish on top of the Euro Event ranking after the nine-event series.

“I’m over the moon! I didn’t realize it was already my 12th appearance!” said a delighted Feijen.

“In Leende I didn’t want to focus on the points, but try to win the event instead. Otherwise it works negative for me. But in the quarters against Roman Hybler a big crowd gathered around the arena table so I figured Mark Gray must have lost so this was the match to win, no way around it.

“But I still wasn’t sure about the points. I never really calculated all that stuff, too negative. After that win, the pressure was off and I managed to win the EuroTour, which was a great bonus cause it’s my tenth win.

“It’s nice to get the qualifying thing out of the way and focus solely on the majors to come. I’m very excited to see the arena at the Alexandra Palace, and of course the atmosphere with the hardcore fans! We will have a great team for sure; all the guys that are in the running are champions!”

There are two more tournaments to go – the US Open and the Kuwait Open – and two automatic spots to play for. Albin Ouschan leads the ‘World’ list while Feijen is in front on the ‘Combined’ list. In the eventuality that a single player finishes ahead on two or more of the lists, then the spots will go to the next highest placed player(s) on the Combined list.

Albin back in the reckoning