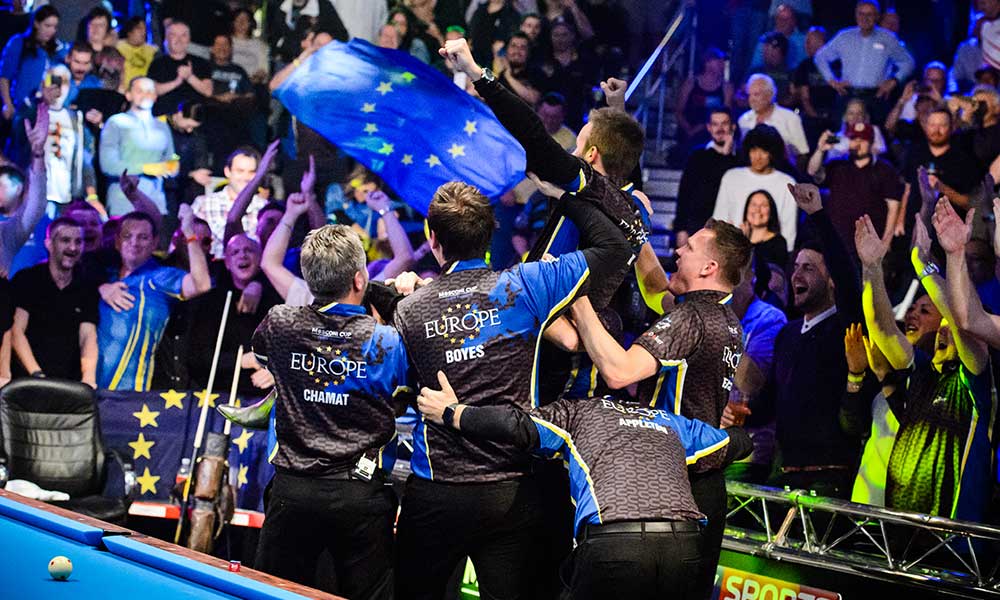 JAYSON SHAW closed out a memorable qualifying campaign for this year’s Mosconi Cup as he won the final event – the Kuwait Open 9 Ball – to win both the Combined and World ranking lists. That gave the US-based Scot his first ever Mosconi Cup start and he will enter the fray on a wave of confidence.

With Niels Feijen having taken the Euro ranking list spot, it meant that the final automatic berth on Team Europe reverted to the Combined list, and it was England’s Mark Gray who took it to make his third Mosconi Cup appearance, eight years after his debut in Malta.

For his wildcard picks, captain Marcus Chamat went firstly for Austria’s Albin Ouschan who had another stand-out year, winning the World 9 Ball Championship in Qatar. For his final pick, he went for experience, grit and determination with England’s Darren Appleton.

Marcus Chamat was delighted with his final line up; “Niels is a World Champion and four-time MVP and that speaks for itself. He’s in the history books and I really don’t think anyone will beat that, and he’s had another great year behind him. Niels always comes to Mosconi Cup to go to work; it’s all about professionalism.

“I expect Mark Gray to come big in London as he makes his third appearance. I’ve watched Mark play a lot in Europe this year and he’s playing really smooth with great cue ball control – they won’t know what’s hit them!
“Although Jayson Shaw is a rookie, if anybody doesn’t know who this guy is now, I can guarantee they will in December. He’s the man of the moment in world pool and he wants this so badly. He’s a perfect mix for the team and he’s improved so much as player and stands with his feet on the ground.

“If anyone thought Albin was a one year hit and run kid, then forget it! He is the real deal, winning the World 9 Ball Championship to cement his place at the top. He’s an awesome match player and tailor-made for the Mosconi Cup!

“Finally, I went with Darren Appleton, who has really come into his own at the Mosconi Cup and even reminds me of me! For the week of the Cup, we really don’t care about anything other than the team, winning and the next match; anything else doesn’t really exist for that week. Darren’s passion and heart for our team is second to none. That coupled with his matchplay and ability to handle the pressure make him a great choice!”