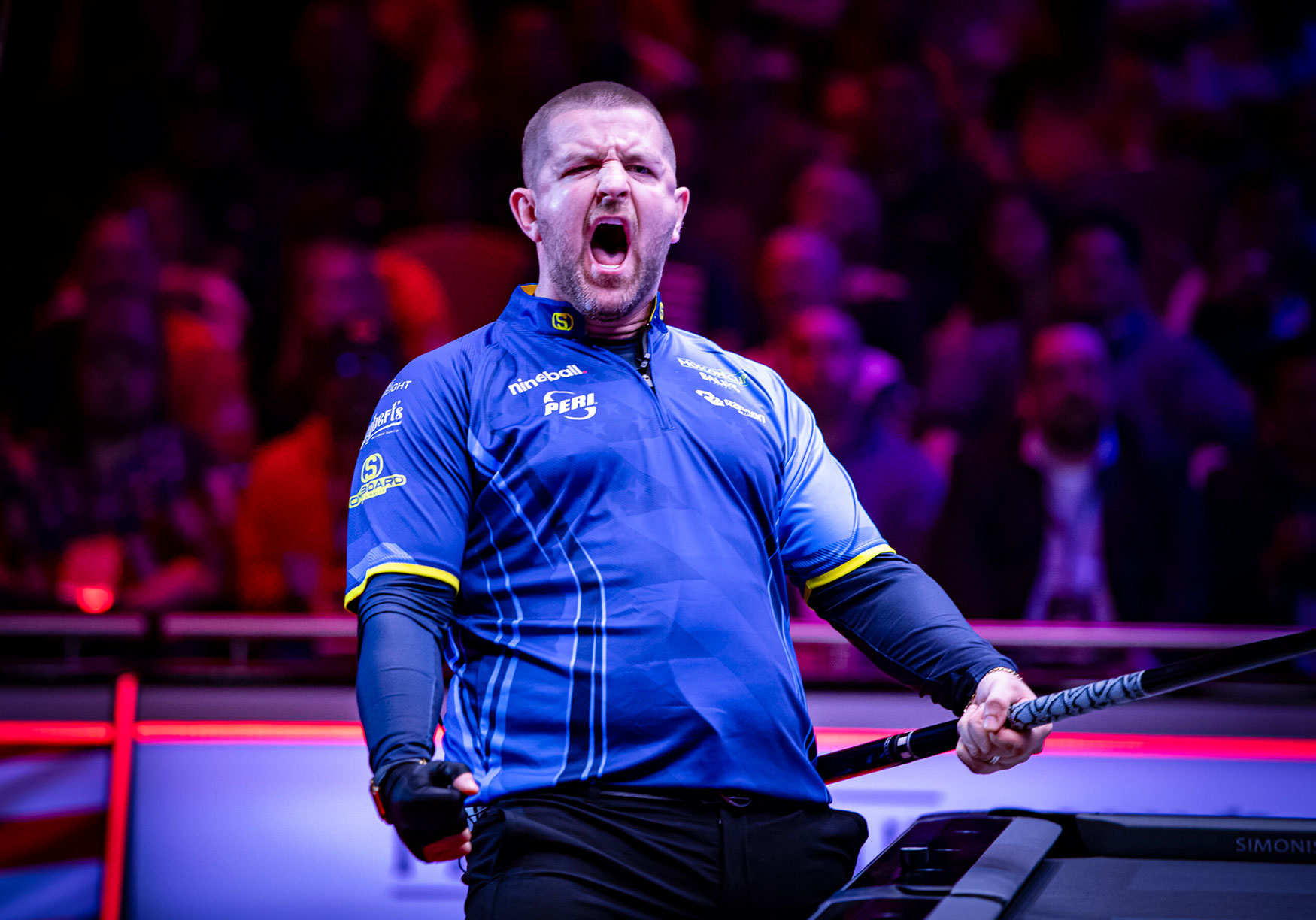 Team Europe took day two of the 2022 Mosconi Cup against the USA to level up at 4-4 at Bally’s Las Vegas live Sky Sports in the UK, DAZN in the USA, Canada, Italy, and Spain, Viaplay in the Baltics, Scandinavia and Poland and networks worldwide.

Day two began with the Fans’ Choice Singles Match with Earl Strickland and Jayson Shaw, respectively picked. Strickland was looking to roll back the years and he was doing more than that as he rallied into an initial 3-0 lead to leave Shaw quiet in his chair. Shaw found his rhythm again in the fourth and a costly scratch from Strickland in rack five put him within one. Another scratch from Strickland in the sixth when trying to cut the eight in gave Shaw the most accessible opportunity to level things back. The comeback was soon complete for two-time MVP Shaw who riled the crowd up to pull Team Europe within one overall at 3-2.

An all-star match-up for the first singles contest between Shane Van Boening and Joshua Filler was never going to disappoint and it didn’t. Van Boening broke dry in the third rack and left an easy 1-9 combo on for Filler to lead 2-1. There was plenty of life in the contest and it was soon 3-3 after an untimely scratch from Filler much to the USA fan’s delight. Filler lost position in the seventh but went airborne in an incredible runout to reach the hill first. A brilliant break and run later and Europe was level overall at 3-3.

The USA needed to stem the European tide from somewhere and it was left up to Tyler Styer and Oscar Dominguez to do that against Filler and Albin Ouschan in match seven of the cup. Nothing could separate them up until 3-3 when an uncharacteristic miss from Styer on the six into the middle pocket brought Filler and Ouschan back to the fold to reach the hill first when it did look like an easy USA runout. Dominguez went airborne on the five in the following rack and it proved to be costly as the Europeans did the rest to get their third point of the day.

In what proved to be the final action of the day, Francisco Sanchez Ruiz got his first taste of singles action against USA vice-captain Skyler Woodward. The crowd was rocking but soon silenced as Sanchez Ruiz moved into a 2-0 lead to put the cat amongst the pigeons. Woodward found a moment of fortune when banking the six ball the full length of the table before finding a plum position on the seven to cut the deficit. Expectations were high from the home faithful as Woodward soon turned it around to a 3-2 and 4-2 advantage.

Play was halted as Woodward reached the hill due to a global broadcast outage meaning players were taken off whilst a fix was actioned to continue live coverage for those at home. Upon return, Sanchez Ruiz broke dry and Woodward ensured the USA would head into day three level overall at 4-4 sealing a vital point with an expert runout that included an exquisite jump on the one as Europe took day two 3-1.