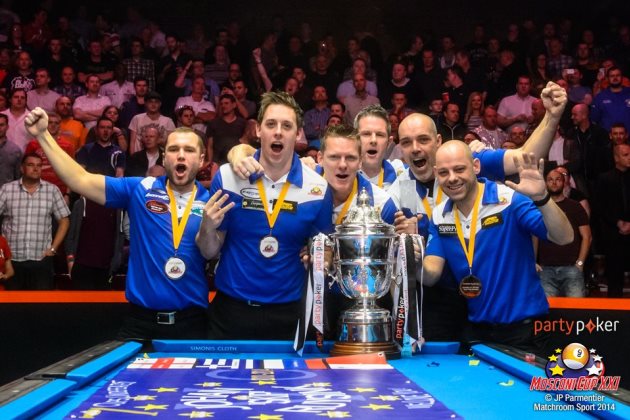 TEAM EUROPE won the 2014 PartyPoker Mosconi Cup, beating the USA 11-5 in front of a boisterous crowd at the Tower Circus, Blackpool. The score line was their joint second best winning margin and leaves the Americans with some soul-searching to do as they attempt to get back into competitive shape for the annual transatlantic 9 ball showdown.

Leading 9-5 going into the final session, the Europeans wanted just two points for the glory and two matches were all that were needed as first Darren Appleton beat Shane Van Boening 5-2 and then Nikos Ekonomopoulos did the same by a similar score to seal a one-sided victory for Europe.

For the winning captain, Johan Ruijsink, it was his seventh and last Mosconi Cup in charge and remains undefeated, an astounding record in any sport.

He said, “It is humbling to win again. The players played great and kept their chin up when they had to take something on the chin. In the last couple of matches we played our best pool.

“We knew America would come out with Shane twice and we weren’t afraid but we were aware that if he got going and they had Justin Hall third who has played well this week, they might get some momentum and it is 9-8 and you might be in a bit of trouble.

“We wanted to focus and Spartacus had two bad results with Shane this year and didn’t feel good about it. I gave him a chance to get revenge and bring the Cup home, and it was perfect that he did it. He had a chance to win it and he nailed it, he is a strong guy and he showed it.

“My highlight of all my Mosconi Cups, well it is one big highlight. In Holland we had this great big sea of orange in the audience and now this is the biggest one in terms of audience. There have been some players like Darren and Niels who have been there in most of my Mosconi Cups, and Ralf Souquet, and I thank them a lot.”

For Mark Wilson it was a sharp learning curve in his first run out as Team USA captain; “We have definitely improved. We didn’t come for a learning experience but we can take a lot away from this week.

“The Europeans had a great plan and great players and they executed it well when they needed to. There were some chances we had which we didn’t capitalise on fully, so we were outplayed and we have no hard feelings about that.

“My team showed up as professionals and it was really pleasing to hear the crowd chanting ‘USA’ because they seemed impressed by what we had done too.

“We want to do something for the sport and we already have plans in place for what we want to move forward with. We have a great young nucleus of players who have set an example which raises the bar for everybody else. We are going forward and the bottom line is we have to work forward.

“I had a suspicion that the two rookies (Bergman & Hall) would be able to handle this. I couldn’t be prouder of them. I see a great future with those two and I think we could build off of those two.”

But the evening belonged to Europe and there was none prouder than home town hero Karl Boyes who made it three Mosconi Cup wins from three.

“It’s amazing. It’s my third Mosconi Cup which is a brilliant achievement and obviously in my home town it’s very special.

“The first win (in 2010) was my favourite in terms of drama with the scoreline. Last year in Vegas was very much a one-sided tournament.

“The last two days were a bit like Vegas last year because we broke away and got the win. When I saw the team sheet, I was a little disappointed because obviously I want to play and win the Mosconi Cup.

“I’ve played three doubles, one singles and feel like I’ve played well and not really got the recognition – I’ve played in three Mosconi Cups and only lost three matches.”

“Me and Darren won the World Cup of Pool and I’ve topped the end of the year off with this. I’ve just got to try and win the World Masters now!”

The Most Valuable Player Award went to Niels Feijen for having the best win percentage. It was the Dutchman’s third MVP trophy in four years which is a feat that may take some time to better.

“I was warming up in the players’ room and it is hard not to look at the TV and just focus on the match you have to play. Darren was unbelievable, he took Shane out of the game and Nikos in sporting terms just stepped on him when he was down. Those guys were great.

“Any player on any team, before you come in your worst nightmare is not to score points so to win points is great. It is never a goal to be MVP but i will take it.”

Nikos Ekonomopoulos made it two wins from two Cups and it was the understated Greek who had the honour of sinking the final ball; “I feel very happy and very excited to get the winning 9 ball, but we worked as a team to win this trophy. We played really well, we were solid, and everybody supported each other.

“I tried to concentrate and play my best. I wanted to fight every second for my team, I did that, and I won.”