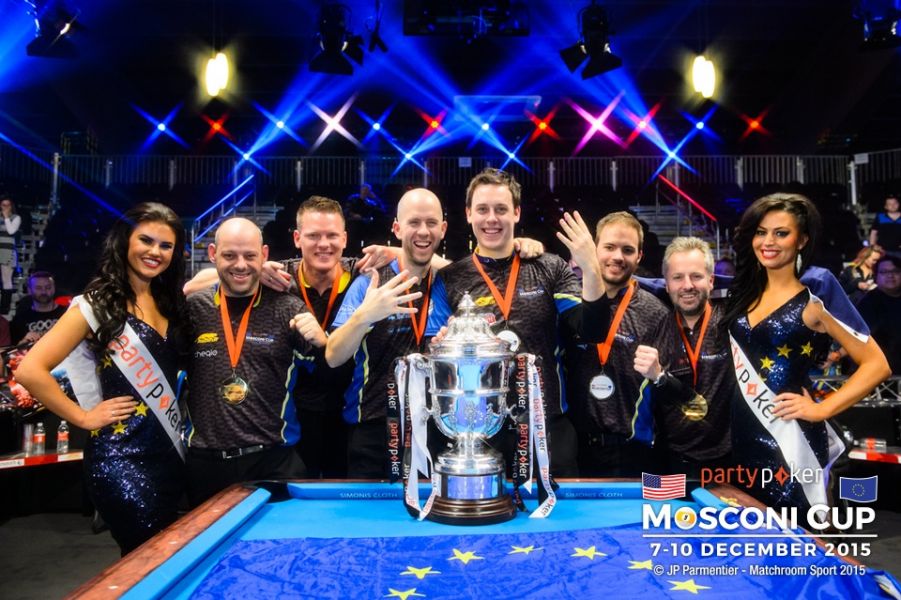 EUROPE HAS retained the PartyPoker Mosconi Cup as they won the required two points to record their sixth consecutive victory and leave a disappointed American team once again on the receiving end. It was Austrian rookie Albin Ouschan who had the honour of downing the winning 9 ball as he clinched a hill hill battle of the rookies against Skyler Woodward.

That sparked jubilant scenes in arena as his joyous team-mates piled on top of the young Austrian and the banks of European fans went wild.

“I won the China Open this year but that was like kindergarten compared to this. On the winning 9 ball I was thinking, just make this,” said Ouschan.

For European captain Chamat, who was a Mosconi Cup winner as a player in 2002, it was a sweet moment as he struggled to control his emotions in victory.

“It is an amazing feeling to be holding the trophy again, it has been a few years for me. I am so happy personally and for the guys, it means so much. When it comes to pool the Mosconi Cup is something I have had so much passion for through the years. I bet Albin and Skyler, for the rest of their lives they will have a passion to want to play in the Mosconi Cup again. That was the same that happened to me when I first played in 2000.

“It has been like watching a movie with a happy ending. Albin, the rookie, has played well all week and he got to finish the match. Everybody pulled their weight and did something for the team. I wouldn’t trade any player this week. Nick didn’t have his best week, he lost some close games, but the spirit he brought was great and that is what makes a team. I am so happy that the team were together and stood behind me. If you have the team spirit you can come with the shots that they did; they battled out there.

“I didn’t want to say anything before because I knew they had a really great team but of course I felt a lot of pressure because Johan Ruijsink had won the trophy six times in a row and I came as the rookie captain, so there was a lot of pressure. I knew they had a great team and they showed it, especially today, but the European team this year was really hard to beat.”

It could have been so different in the opening match of the session. With the USA trailing 6-9, the first game went to 4-4 as Niels Feijen and Justin Bergman matched each other in a high quality match. Bergman was running out a tough final layout when he just came up short going from 7 to 8 and left himself blocked behind the 9 ball.

He tried the bank shot but missed it and Feijen dished up to take the point. Instead of 9-7 it went to 10-6 and all seemed lost for Team USA. Shane Van Boening though wasn’t quite finished as he came back against Karl Boyes to steal the point in a decider. That made it 10-7 but it was to be the American’s last contribution to the score board.

The presentation saw the losing side receive silver medals and the champions their gold medals and it was Holland’s Niels Feijen who won the Most Valuable Player Award, his fourth in five years.

Darren Appleton, who has been on the winning side for the past six years, said, “There is more and more pressure every year. I started in 2009 in Vegas with 350 people and now it is over 1,000. It is getting tougher and tougher but the good thing is that the Americans have really come to play. They are on the right road so it is going to get tougher and tougher for the future.

“We couldn’t have got a better replacement than Marcus. He has done a fantastic job and is really passionate, even more passionate than the players. He did an amazing job and we are very proud of him.

“Niels is Mr Reliable. He is rock solid, his cue action is amazing, he has an amazing break and he is so consistent. He is the guy I want on my side when you go to war. Karl’s record in the Mosconi Cup is amazing and Albin, for a rookie, wow – what a future star.

“The big thing USA showed was a lot of heart but the young players really impressed me. Bergman played awesome, Skyler for a rookie was amazing and Shane played pretty strong. Mark is doing a really good job as the captain. Their fans have been amazing getting behind the team and this is definitely the best Mosconi Cup we have had in America.”

For Mark Wilson, despite the defeat, it was a step in the right direction for a team that was on its knees two years ago.

“The guys showed the spirit that we needed to win but we didn’t have enough opportunities. We played much better and today was by far our best day; it started last night with Bergman’s match. Justin played his heart out in the first match but didn’t get the break, and Skyler too – hats off to them both because they came through big time for us. They displayed leadership and an example of how a warrior loses.

“We are getting some momentum and we certainly got greater fan support. It motivates me and inspires me to see the fans get behind it like this. Europe kept the pressure on us and made it difficult for us to really assert ourselves. Europe had a super strong line-up from top to bottom, their worst player is fantastic, but we stood toe-to-toe with them for four days. We made a few too many unforced errors, we just can’t do that.

“We showed relentless positivity throughout, not just my players but the spirit of the American pool public, who have really shown a lot of support. All the work my players did behind the scenes, not just practicing but doing things which help to grow the sport, I commend them for that.”

The 2016 Mosconi Cup will take place from Tuesday to Friday 6th to 9th December at the Alexandra Palace, London with tickets available in January 2016.

Europe two away from another victory