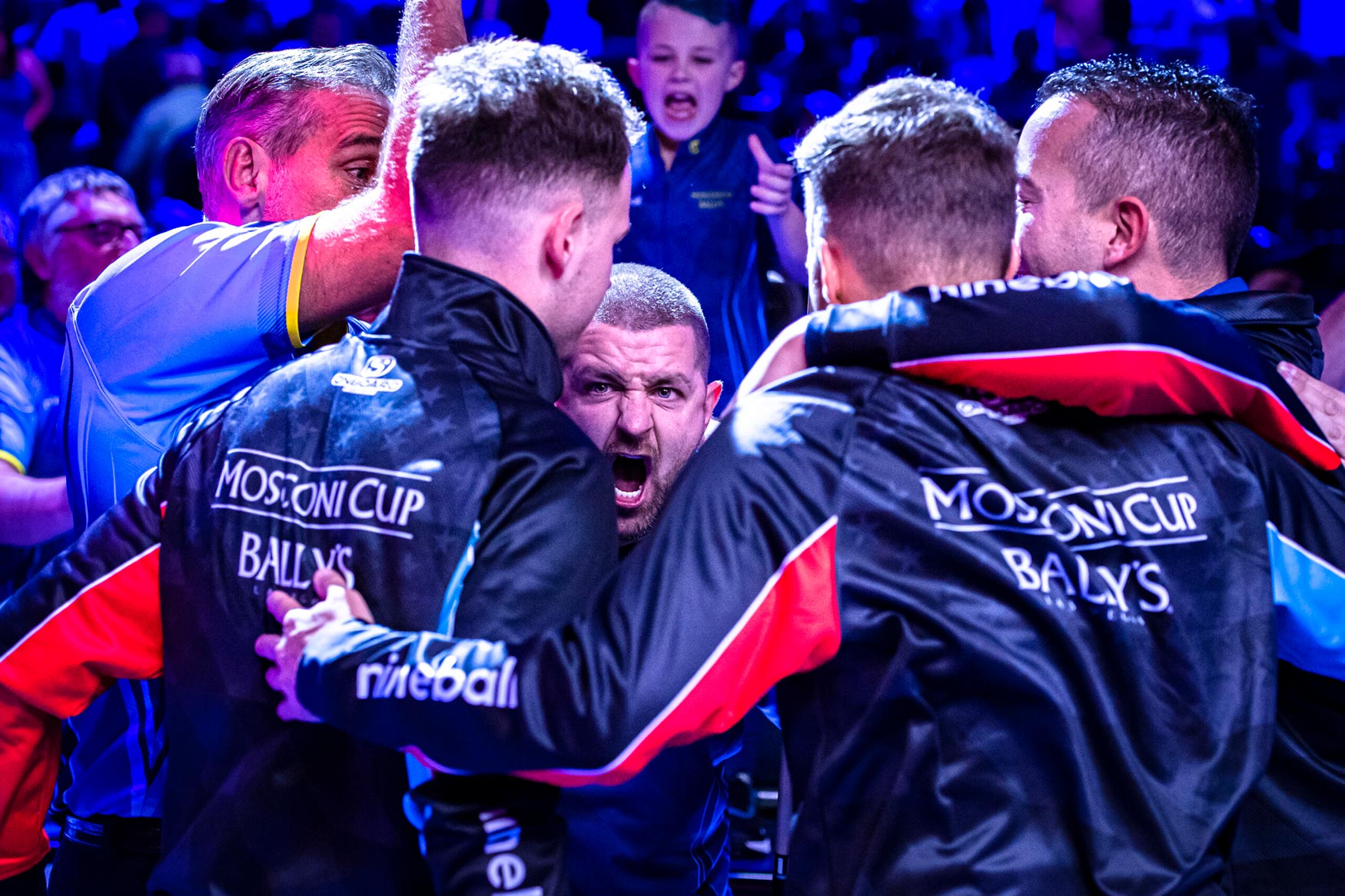 A grandstand final day of the 2022 Mosconi Cup has been set up with the score 8-6 to Europe after three days of action at Bally’s Las Vegas live Sky Sports in the UK, DAZN in the USA, Canada, Italy, and Spain, Viaplay in the Baltics, Scandinavia and Poland and networks worldwide.

The action began in a frantic manner as Shane Van Boening ticked over for a historic match 100 in the Mosconi Cup alongside veteran and hero Earl Strickland. It was a tight battle against Europe’s duo of Jayson Shaw and David Alcaide at 3-2 to the USA. A scratch from Alcaide on the break in rack six brought Strickland and Van Boening to the hill. The pair wouldn’t have liked how tight it got through as Shaw fluked the nine in rack seven before levelling up for a hill-hill finish. Strickland and Van Boening inspired each other to put the USA ahead overall 5-4.

Alcaide was straight back out into singles action against Tyler Styer with the crowd hoping for the momentum to stay in the USA’s favour. Alcaide was cueing purely with very little room for error up until 4-0 up. Styer was sat frozen for large parts and struggled to make balls off the break for the first time this week. The Wisconsin man pulled the jump cue out as he ran out the fifth to make it a contest, one further rack followed before Alcaide put his stamp on the match to level again at 5-5 overall.

Strickland was in the heat of the action and back out with Skyler Woodward in the 11th match of the cup against World Pool Masters winner Joshua Filler and US Open winner Francisco Sanchez Ruiz.  The early exchanges were close until Sanchez Ruiz showed his prowess that sees him as the current Nineball World No.1 with an epic bank shot to go 3-1 up. Strickland was digging in to save Woodward’s blushes at times but it proved to be too little as Sanchez Ruiz made a winning golden break 5-2 to establish a European lead overall.

There was no time for Strickland to mull over the last match as he would be up against European Open champion Albin Ouschan in what proved to be a hellish time for the veteran. After establishing a quick two rack lead, Strickland barely saw the table thereafter with a few moments costing him dearly as Ouschan came out strong to seal a 5-2 win with five on the spin.

A huge match-up between America’s Van Boening and vice-captain Woodward and Europe’s Shaw and Filler always promised fireworks and it delivered in a way not many would have predicted before a ball was potted. Van Boening and Woodward delivered a quite spectacular whitewash, the first one of the week to keep USA well in the tie going into the final action of the day. It was scintillating stuff.

Shaw has been a thorn in the USA side for many years but has struggled for a rhythm at times this week. The tables turned though as he seized on Oscar Dominguez to put Europe two up ahead of the final day. Shaw had raced into a two-rack buffer but Dominguez levelled up at two apiece. From there, Shaw hit a new gear to bring home another European point.

Tomorrow sees the final day of the 2022 Mosconi Cup at Bally’s Las Vegas with 11 the target for victory with the score currently set at 8-6 to Europe overall.