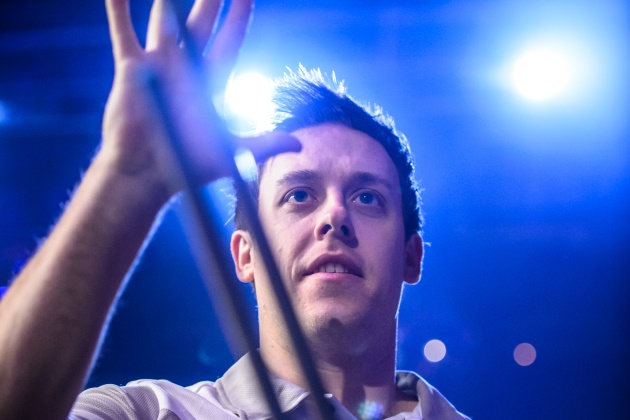 EUROPE INCREASED their lead at the 2014 PartyPoker Mosconi Cup as they won the second session 3-2 to take the overall score to 6-4 with a potential 11 matches to complete. The US though, topped and tailed the session with wins but looked slack in the middle as the Euros asserted themselves with three wins.

Trailing 6-3 going into the final match, it took a moment of magic from Shane Van Boening as he executed a hugely difficult shot to perfection to set up the US win and keep their Mosconi Cup hope alive.

Commented US captain Mark Wilson, “The last point is naturally very important. We ended on a high after struggling through a few matches. We feel good about our chances from here on in.

“Shane’s shot was one of the most gutsy shots you will ever see anybody attempt. You have to be so dedicated with every molecule in your body to come up with a shot like that in a big moment, a big match. He is world-class and it gives all the guys confidence.”

Johan Ruijsink was naturally disappointed that his side couldn’t convert a good session into a great one, “I am happy with the score but we have to take the last match on the chin. We had a very good chance to win it but as an overall score, 6-4 is not that bad. It is always a bit hard when you can see the winning line of the match but you stumble. But I am happy with 6-4 overall.

“We won’t get over the last match in the first match tomorrow, we will get that done tomorrow morning. It is important to start well again tomorrow because we don’t want America to take any momentum from this match.

“We would love to keep Van Boening on zero but he is such a great player that he should get points and he will. It was a great shot in the last match.”

The Americans took the first point of the session with a great performance from the two Justins – Hall and Bergman. Aside from a dodgy lag from Bergman, the pair looked assured throughout as they got the better of the European pair of Niels Feijen and Mark Gray as well as a hostile crowd.

“That was a huge point,” said Bergman.

“We needed a win and I’m honoured to be here. It’s amazing and we have nothing like this in the States and I’m so happy we won. Everyone thinks we’re the underdogs and that’s fine as I don’t care what people think.”

“We’ve played a lot together since we were pretty young kids so we’re used to each other’s game and play real similar. We’re trying to win every match and every game,” added Hall.

Hometown hero Karl Boyes had the crowd singing ‘Walking in a Boyesie Wonderland’ as he swept aside Corey Deuel 5-2 to restore the European’s lead. It was the Englishman’s superior shot-making that carried it whilst Deuel looked a little brittle under the lights.

Commented Boyes, “That was amazing! When I first came out I was shaking. The first frame was a bit of a safety battle but I got my stroke going and felt really good.

“Some of the crowd don’t know some of the American players but we do and they’re dangerous players. It’s their first time and they’ve got to get used to it but they’re a good unit. It’s a tough tournament and you’ve just got to keep fighting as it’s all about momentum.”

Team Europe then created a two point lead as a lacklustre John Schmidt and Shane Van Boening gave up a two rack lead to lose five straight games to Darren Appleton and Nick Ekonomopoulos. It continued Van Boening’s miserable run in Blackpool so far and took the score to 5-3 in favour of the Europeans.

The momentum continued in Europe’s favour as Niels Feijen took down Justin Bergman to put the Europeans three clear.

The pivotal moment came when Bergman, leading 3-2 with just four balls on the table, scratched into the middle pocket to gift the rack to Feijen. The Dutchman broke and ran the next to reach the hill and when his push out was declined in the next, he returned to the table to jump and pocket the 1 ball.

Dramatically, Feijen scratched but when Bergman missed the 7 ball it was game over as Europe’s grip tightened.

“I was shocked that he missed the seven,” said Feijen.

“He shot it so quick with inside spin and I was flabbergasted that he missed it. I played a tough shot on the seven, cut it in and got it perfect on the eight. I enjoyed it from there. I haven’t played that much yet but I feel my game is pretty solid.

“In the first match me and Mark played well, ran our first two racks but both Justins played excellent. In this match I played really well. The crowd is unbelievable, you have to really get used to it because there is noise non-stop and they are chanting and singing. The atmosphere is unbelievable,” he added.

However, just when he needed to deliver something for his team, Shane Van Boening came with a match winning shot to throw his team a lifeline and turn a 7-3 deficit into 6-4. Partnered by Corey Deuel, they reached the hill at 4-2 but a series of errors allowed Darren Appleton and Mark Gray to level things.

With everything on line the US Open champion powered the cue ball table length off the rail to pocket the 4 ball up the table and follow the cue ball through to gain position on the next ball and set up the match winning opportunity.

“That was probably the best shot of my life,” said a jubilant Shane.

“We are going to get together and we are going to try and figure out a plan, mainly we will work on the break and try and keep positive mentally.”